One day a family couple with 4 kids decided to improve their living conditions. The city dwelling that would be suitable in several respects – location, layout and total area – appeared to be too expensive, and the parents considered moving to the suburbs. The family composition imposed certain financial limitations on buying a ready-to-use cottage, and the guys decided to build their future family nest from scratch. 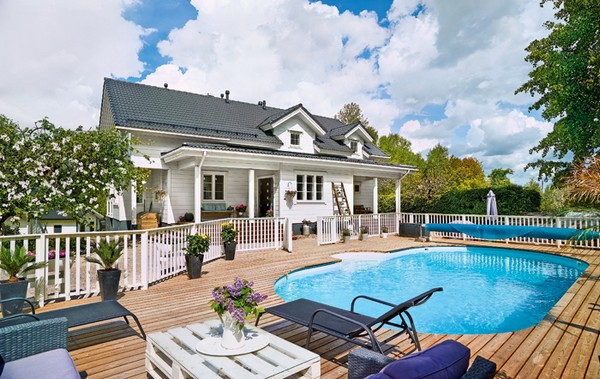 As a result they chose the most feasible design with an open-to-below second floor and a total area of 200 sq. m. The centerpiece of the first floor is a public zone including and open concept kitchen, lounge and dining rooms, and a number of support rooms: an entry, bathrooms, laundry room, sauna and a master bedroom. The second floor is a space of kids: it features 3 toddler bedrooms, a bathroom and a walk-in closet.

The territory along the house perimeter is paved. Most of the adjacent territory is occupied by a wooden terrace, a solarium and a swimming pool. An open cold part of the basement is used for storing gardening tools and swimming pool equipment. While the indoor part is occupied by technical facilities. 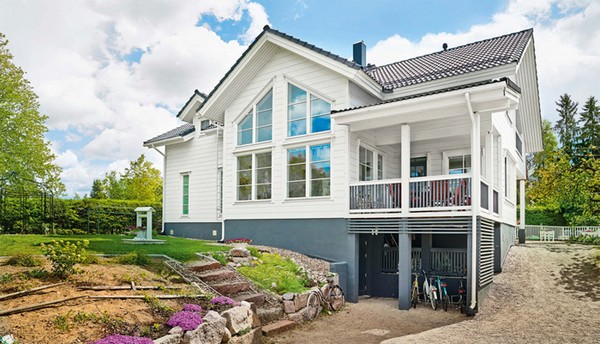 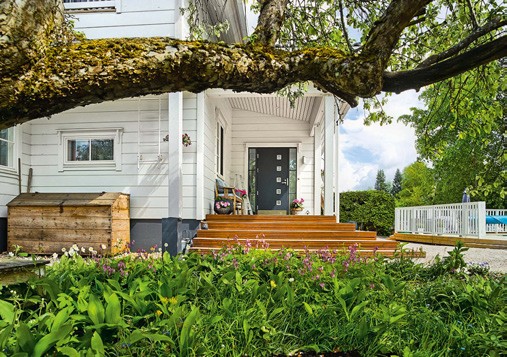 In wintertime comfortable micro-climate in the house is provided by hot water floor heaters. And in heavy frosts the masters utilize a wood-burning fireplace. The color scheme of the interior is achromatic – traditional for Scandinavian style. And that is quite understandable – the house is surrounded by picturesque landscapes and its enormous windows are meant to “include” the landscape into the interior. White surfaces never enter into dissonance with the changing scenic countryside and also perfectly reflect natural light, which is extremely important for northern regions. And black and smoky gray are just accompanying colors that sometimes look absolutely invisible. 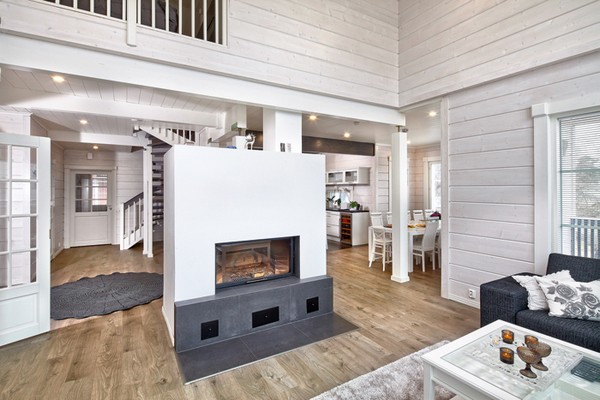 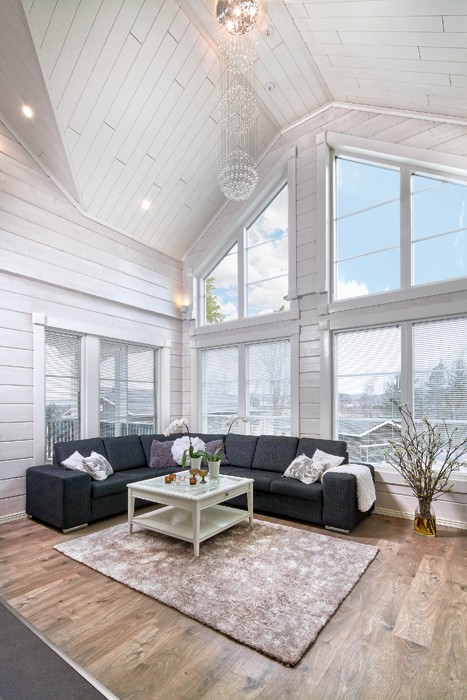 Considering that the house is occupied by a big family, the kitchen features numerous domestic appliances and storage zones. And the cooking area is doubled by means of a big kitchen island. Here venetian blinds are thoughtfully installed between the glazing frames to protect them from grease and stains. 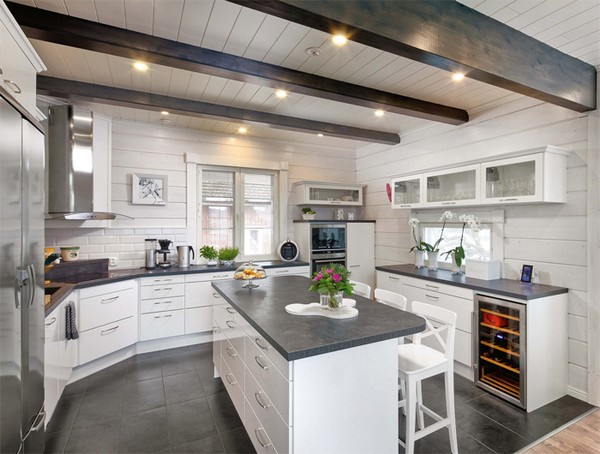 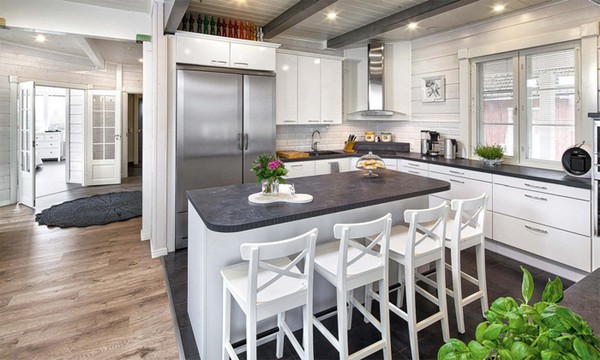 All the rooms are lit by built-in lighting fixtures, and only a few zones feature accent ceiling lamps. 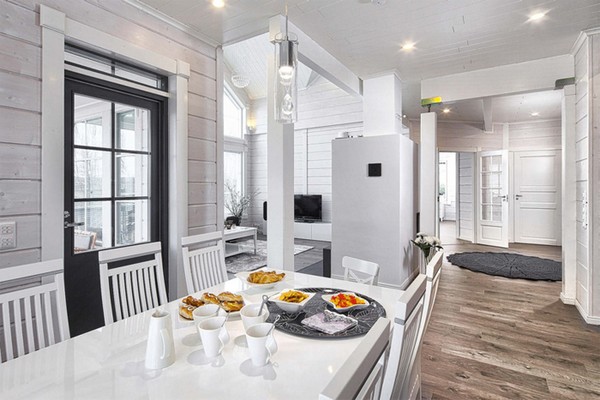 The flooring is made of solid natural parquet boards. 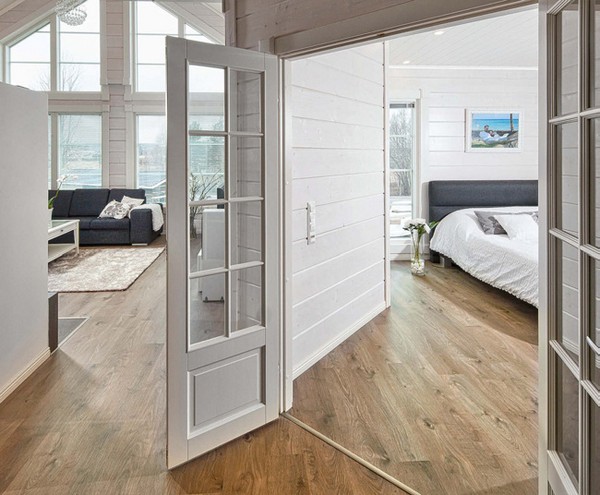 All the storage systems are closed – arranged in separate rooms, walk-in closets or built-in wardrobes. 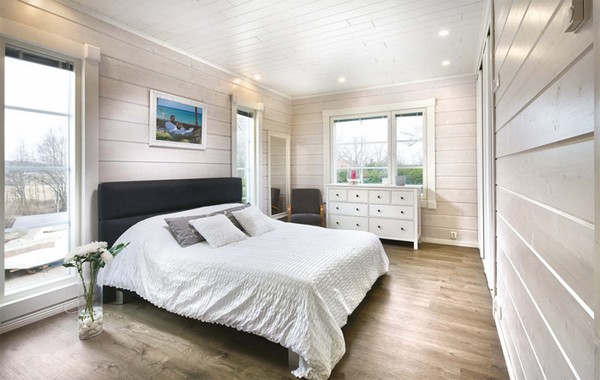 The bathroom goes out of the general color scheme and features dark ceramic granite with a few bright fuchsia accents. And dark wood used in the sauna is softened by smoky gray walls and ceiling. 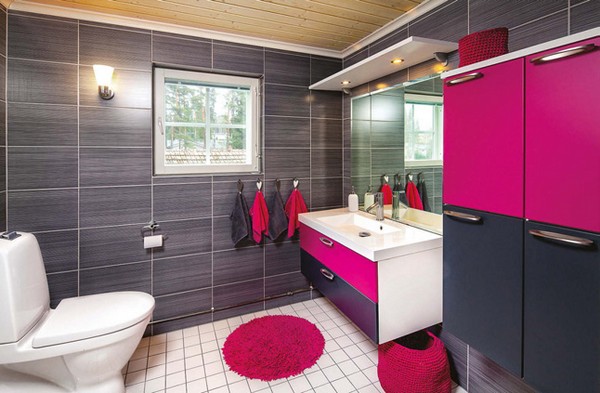 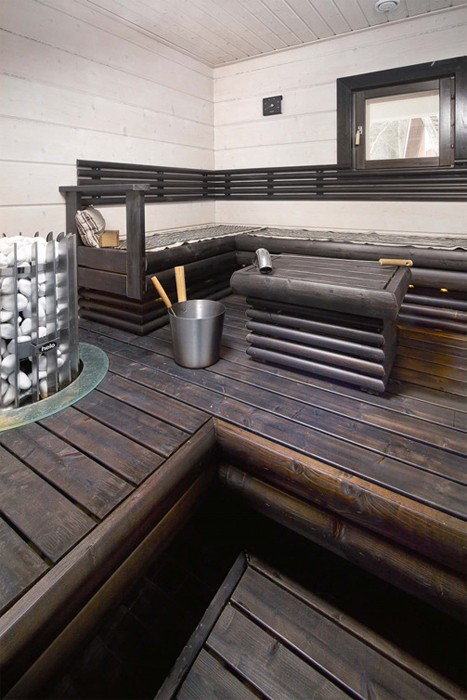