This four-room apartment is located on the west side of Moscow and has a relatively big total area – about 120 sq. m. With a ceiling height of 2.9 meters, big panoramic windows, a nice view and a park nearby, it immediately attracted the attention of the future hosts – Christine and Michael and their two kids. The guys hired a professional team of architects and designers to turn it into an apartment of their dreams. 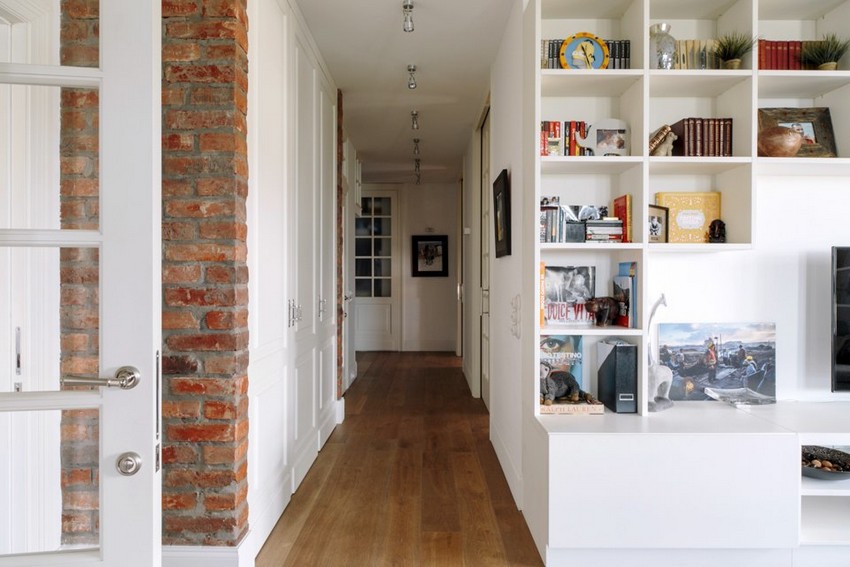 And their dreams were as follows. Since the masters frequently travel to the USA, they feel absolutely comfortable about contemporary finishes, such as brick and concrete walls. In terms of color scheme they wanted a light space without any bright accents (the only exception was toddler rooms where colors are essential for proper mental health of children). And when it came to a choice of interior style, they gave their heart to the so-called NYC style featuring mostly natural finishing materials.

According to the architects, the resulting interior can be called “expensive casual, like a white shirt and nice jeans”. Everything is pretty simple, with no excessive décor. And the mood in this monochrome interior is set by ethnical motives brought from different places of the globe. 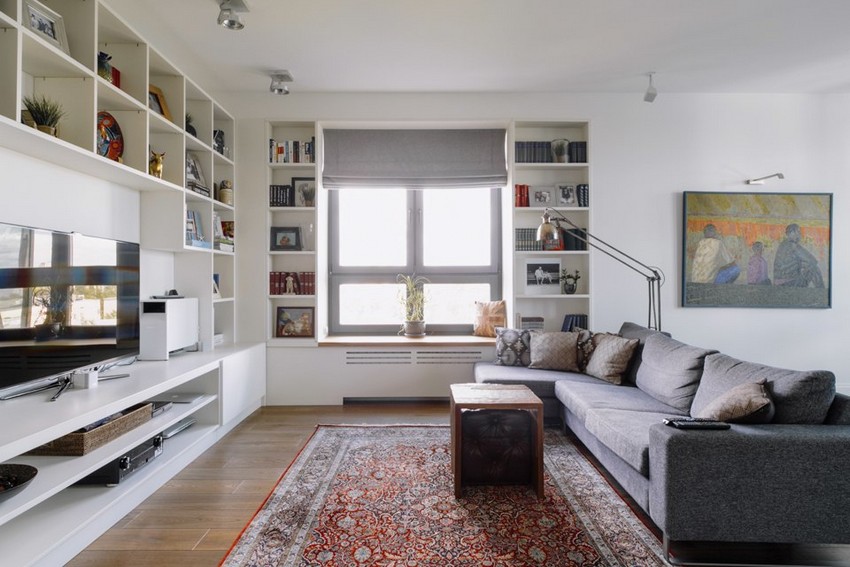 The key problem the architects faced was keeping the ceiling height practically unchanged – they knew every millimeter would count. One more vital point was letting natural light fulfill the apartment to the greatest possible extent. That’s why the interior features so much stained glazing. Windowsills are pretty wide and serve as benches and desks. Also much attention was paid to the doors – the apartment features 6 different models.

According to American traditions, three functional public areas – kitchen, dining and living room – are arranged as a single open space. The kitchen zone is quite compact. Its centerpiece is a kitchen island dressed up with built-in flower pots – this idea was borrowed by the hosts from their favorite restaurant. 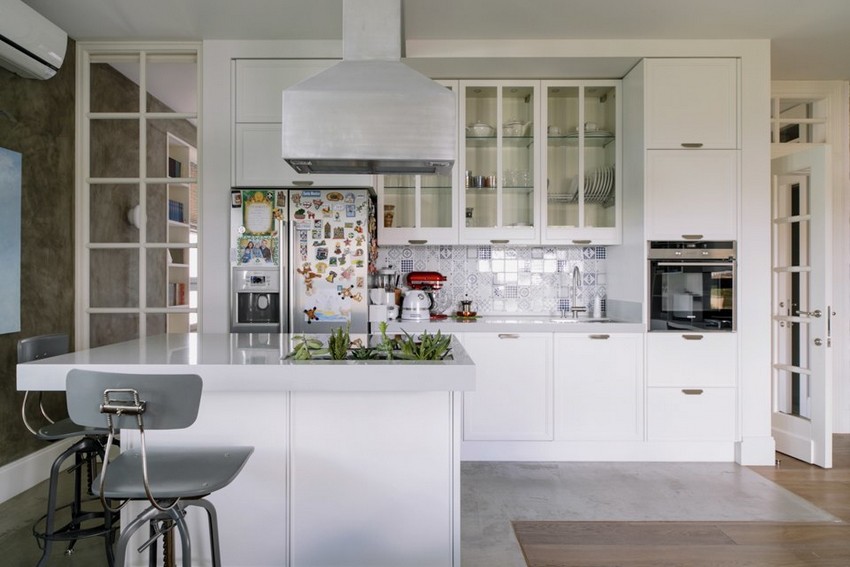 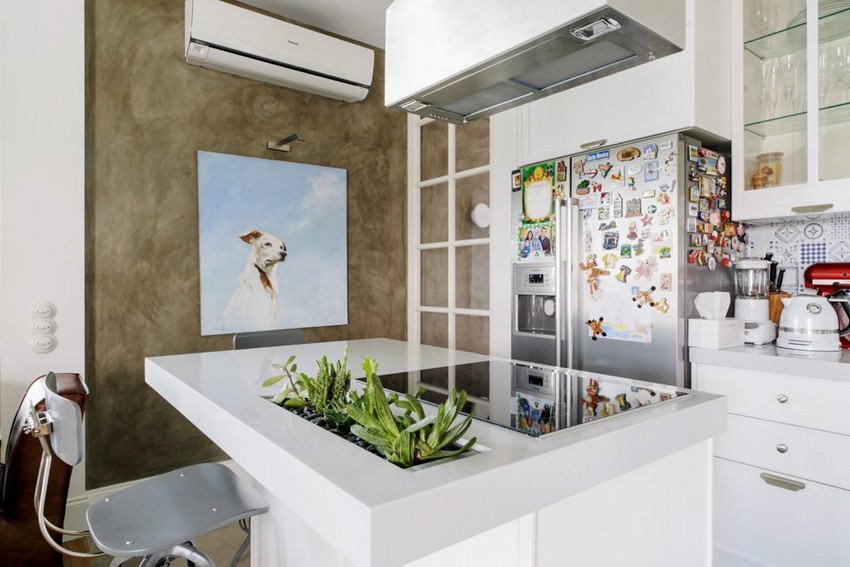 The lounge zone is concentrated around a TV-set and features a big gray corner sofa, a small leather ottoman and a rough wooden coffee table, which is matched by the same-style bedside tables in the bedroom. The living room zone is framed by a giant shelving unit that was custom-made from the architects’ sketches. 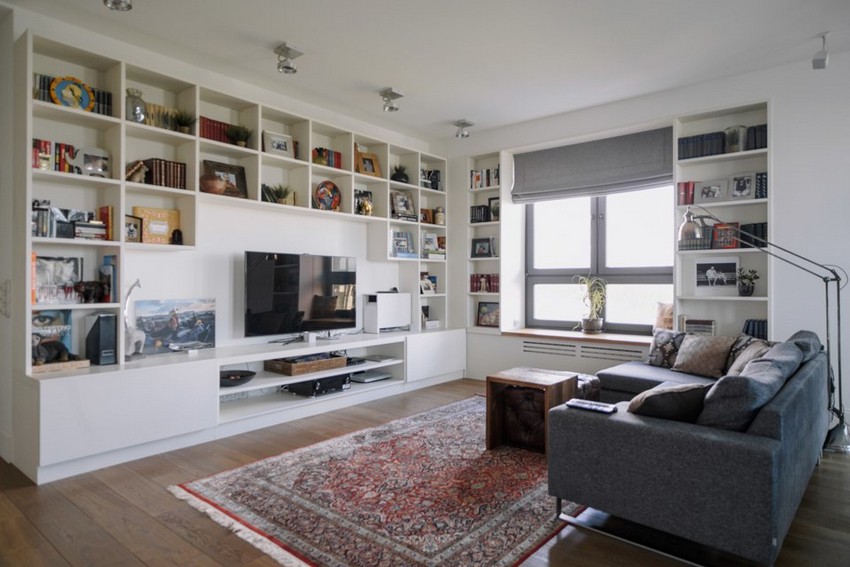 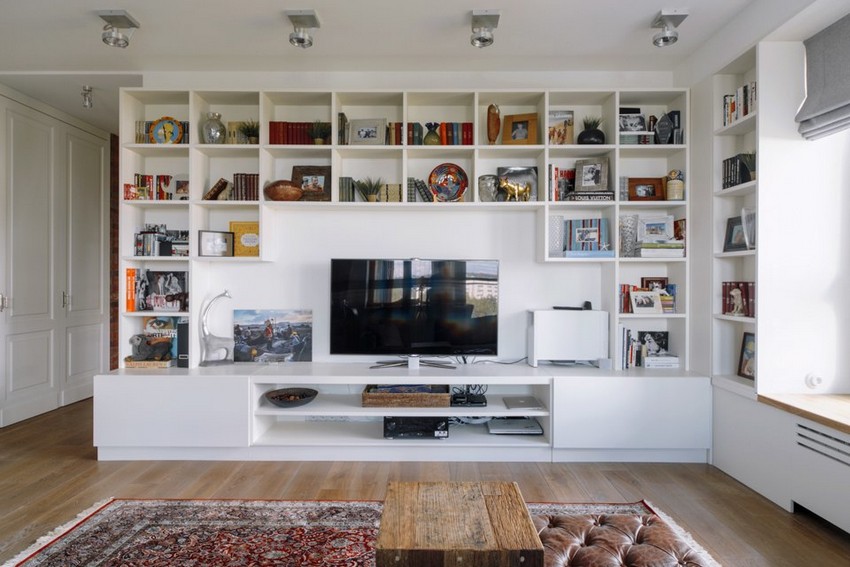 As for the dining area, it features a set by Restoration Hardware and Flamant pieces of furniture. 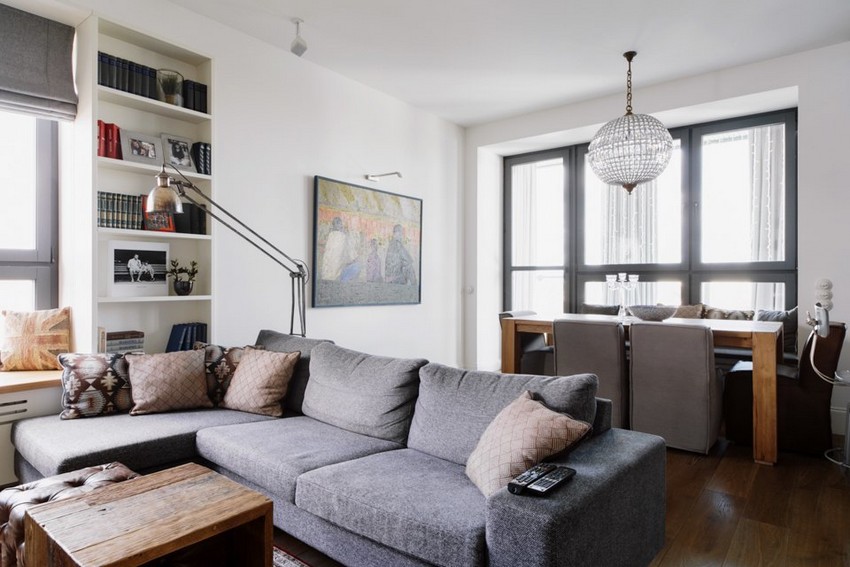 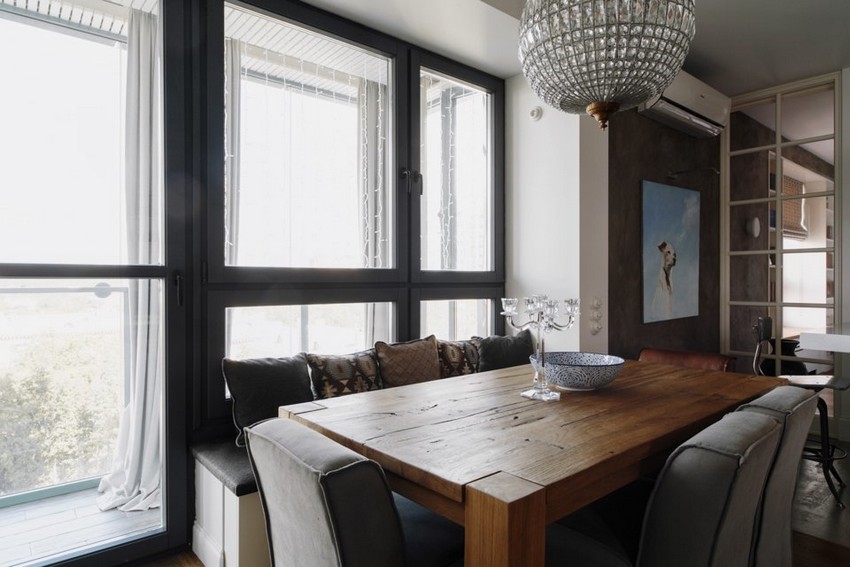 From the dining room one can see the bedroom – surprisingly enough, the masters had this private area separated with a transparent glass partition. Here the windowsill is also arranged as a sitting place, and precious area around the window is turned in an open storage zone. The mood of the room is set by an original photo hanging above the headboard. The bedroom also features a walk-in closet exit and a bathroom. 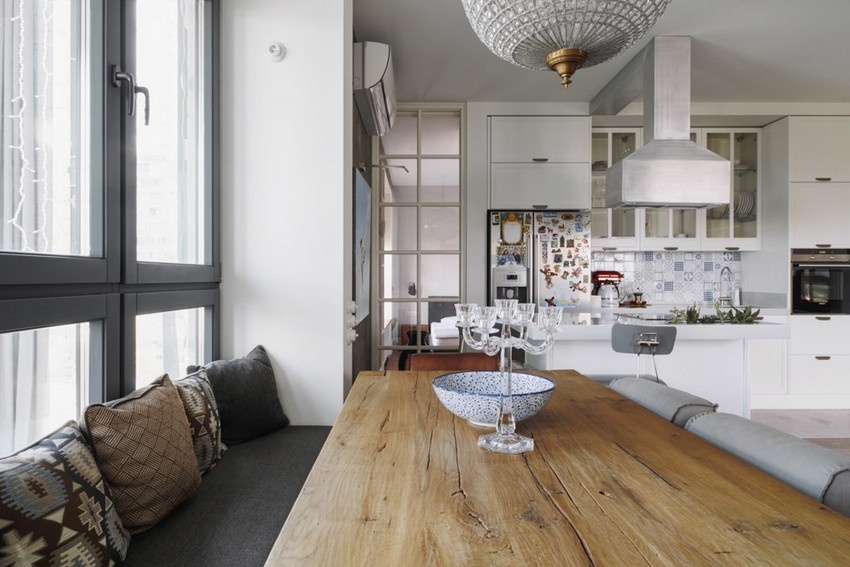 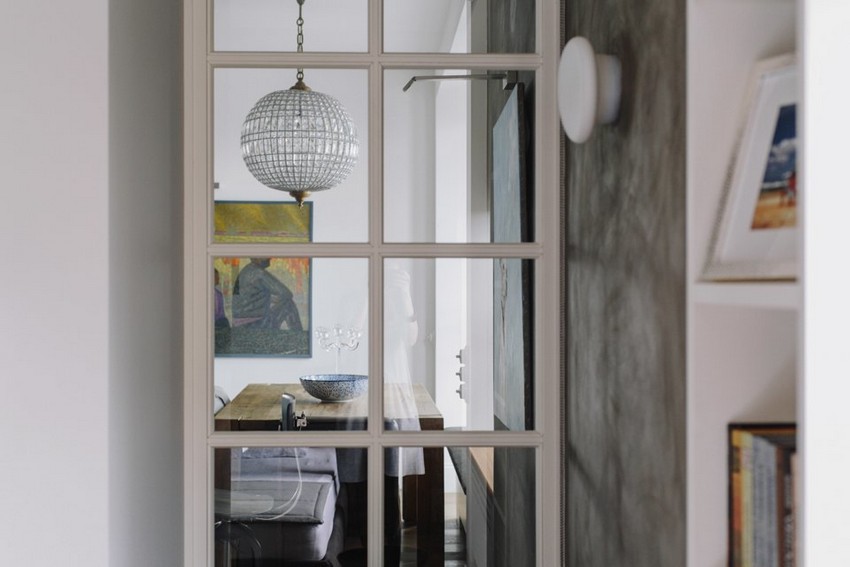 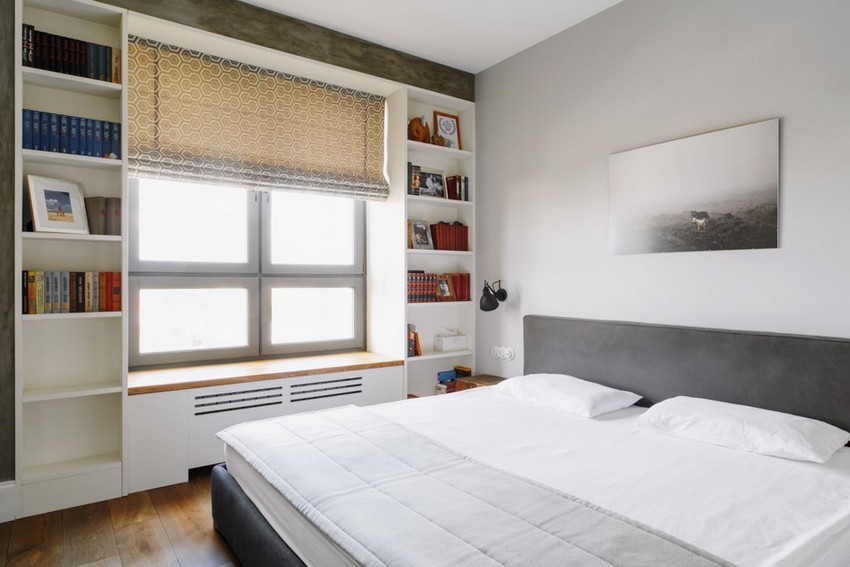 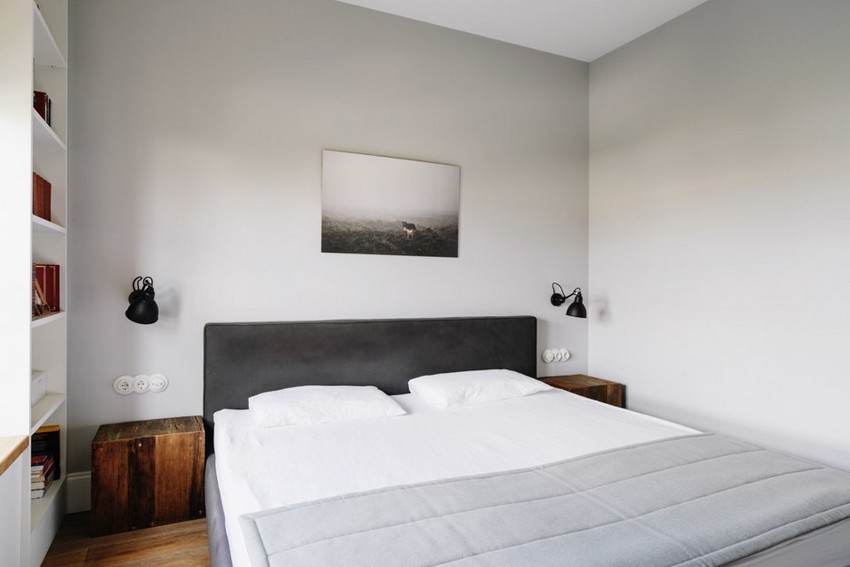 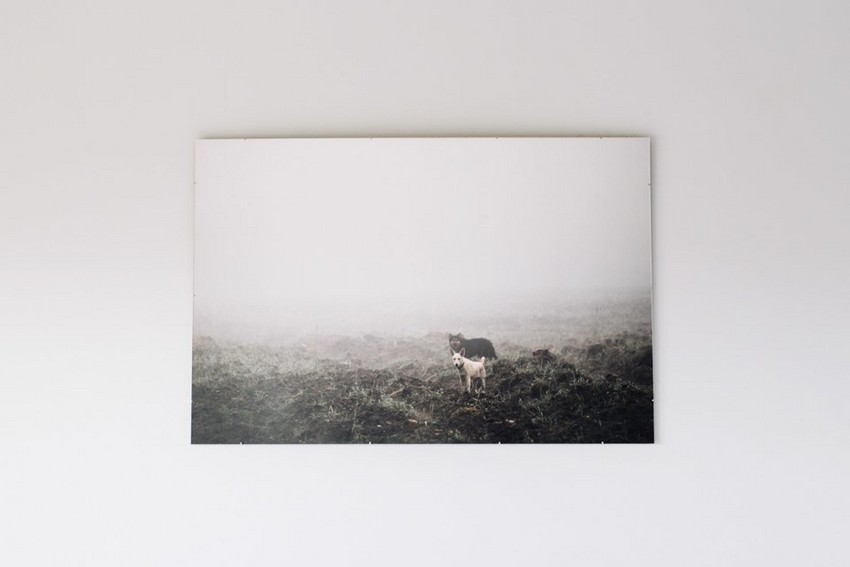 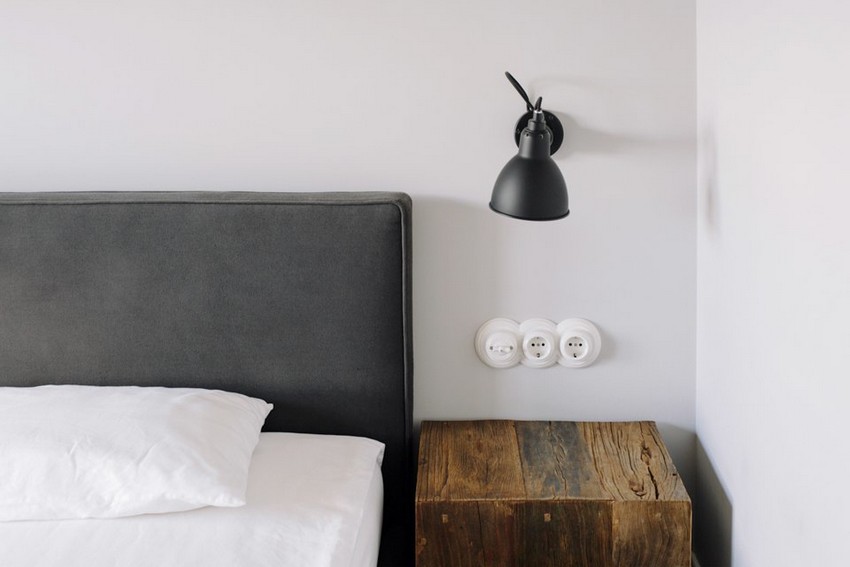 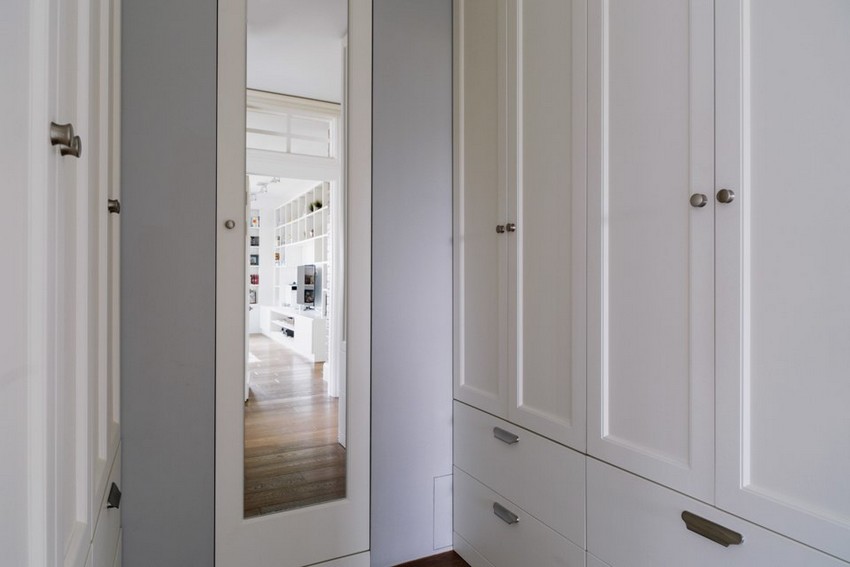 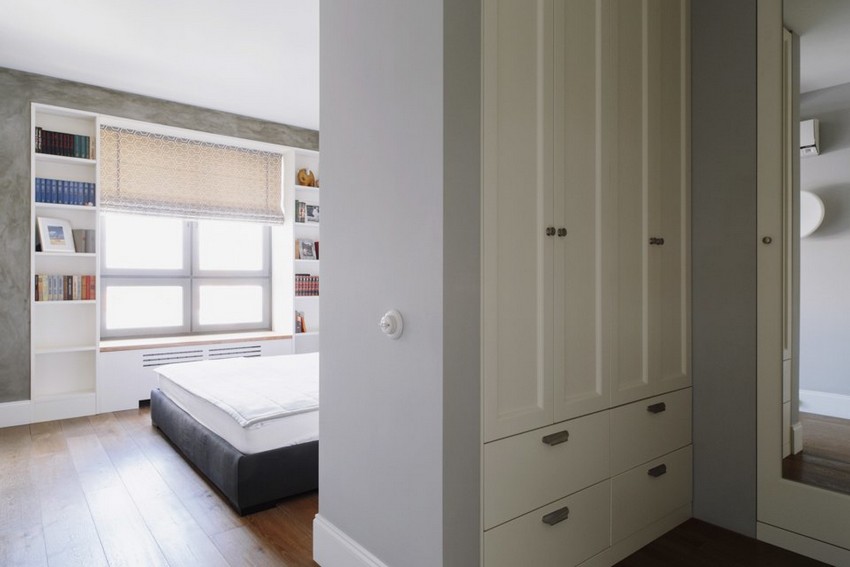 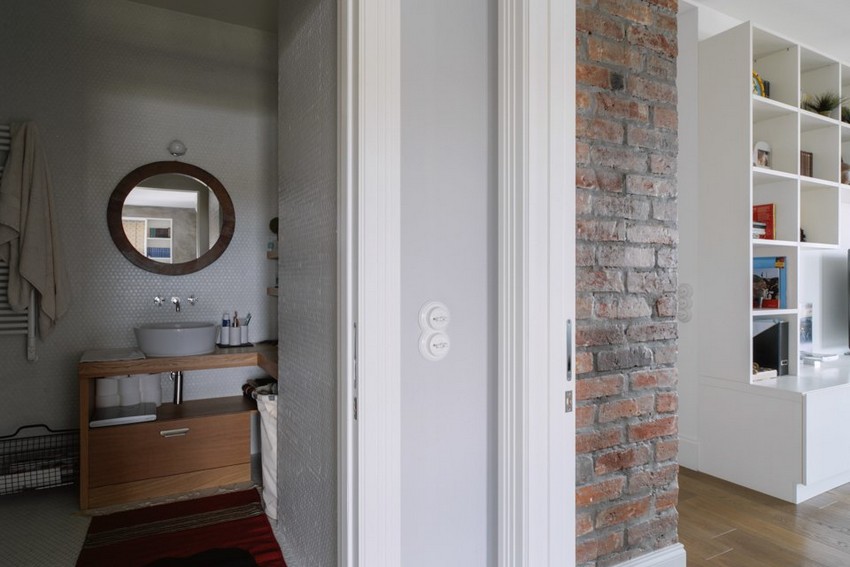 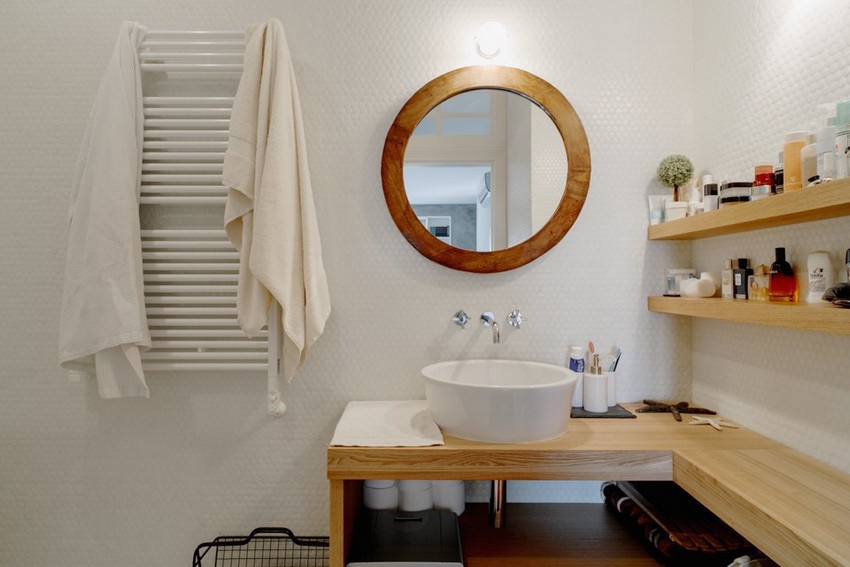 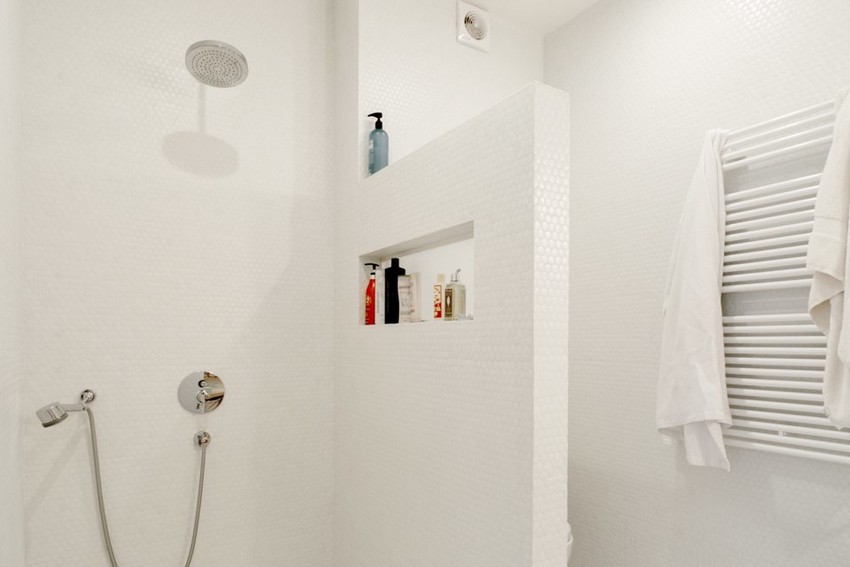 As for the toddler rooms, they’re designed in a very original way. Symmetrically located, they’re divided by a wall with sliding doors, which allows for turning the kids’ zone into a giant playground. On the other side, children can close the doors anytime to get some privacy while doing homework. Also the kids have a bathroom of their own with two wash basins. 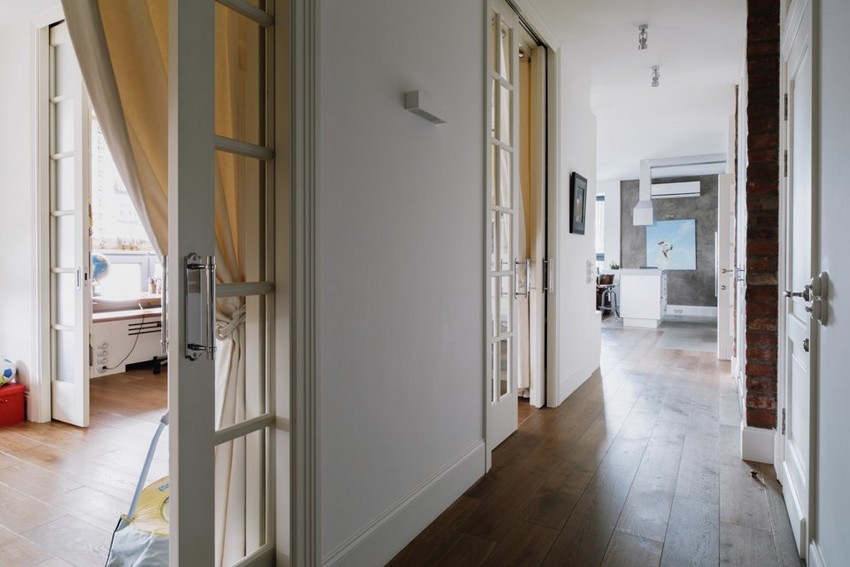 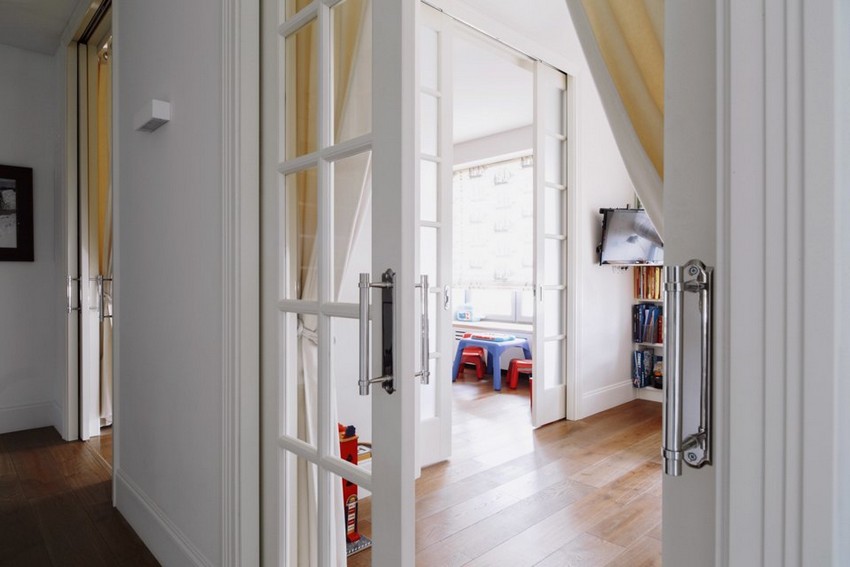 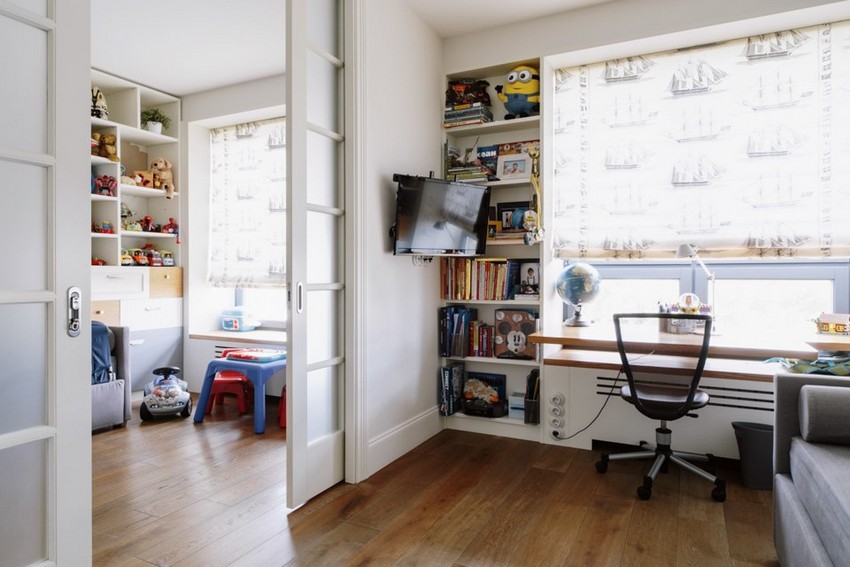 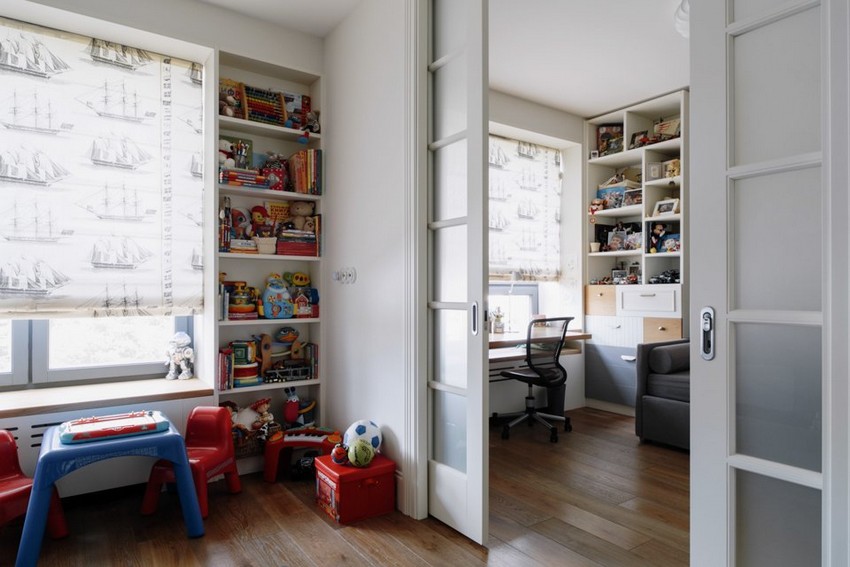 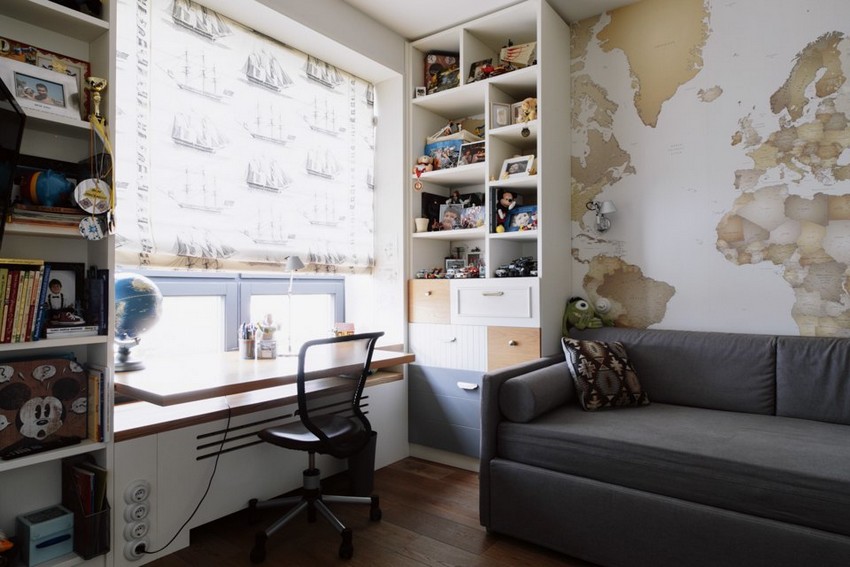 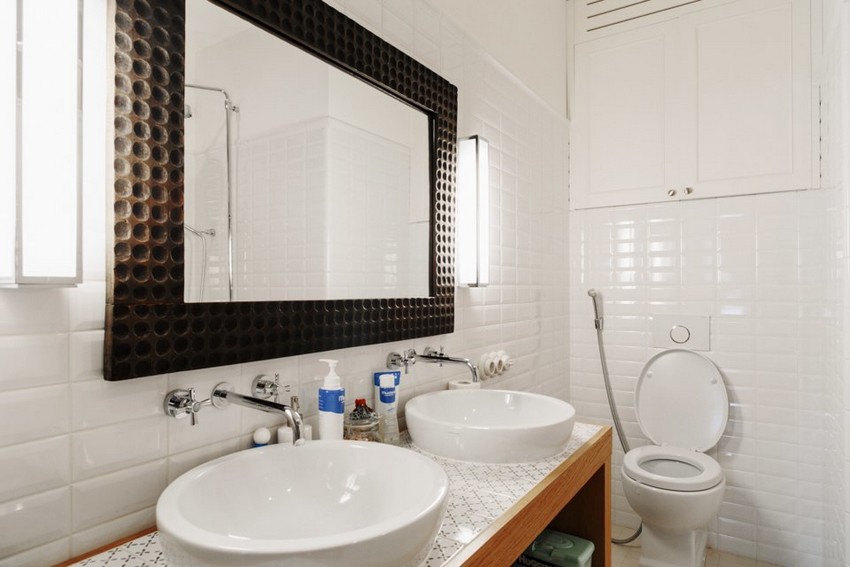