The owner of this apartment is a young bachelor, and almost every detail of his newly-built apartment, in which he moved just a few months ago, speaks about this fact. General loft-style concept softened by wooden finishes and traditional blue wallpaper, mannish gray, white and blue color scheme, huge panoramic windows, minimalist furniture, an open-concept kitchen, a platform bed, a transparent glass wall between the bathroom and bedroom – even one glance at these interior components lets us understand that a young and single man is living here. 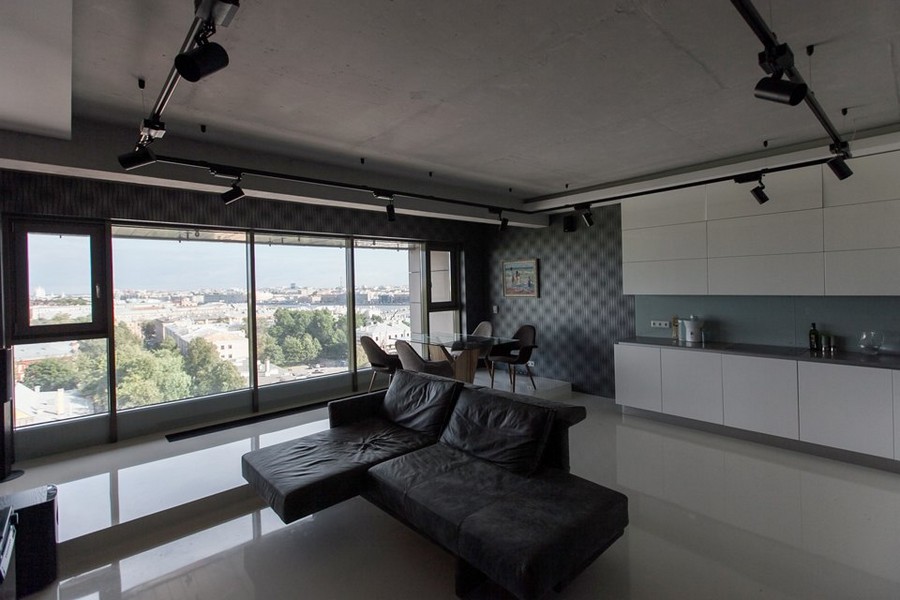 The most important things that attracted Roman to this apartment were a new fashionable neighborhood, nice location and a splendid view of the city and river opening from its panoramic windows on the 13th floor. 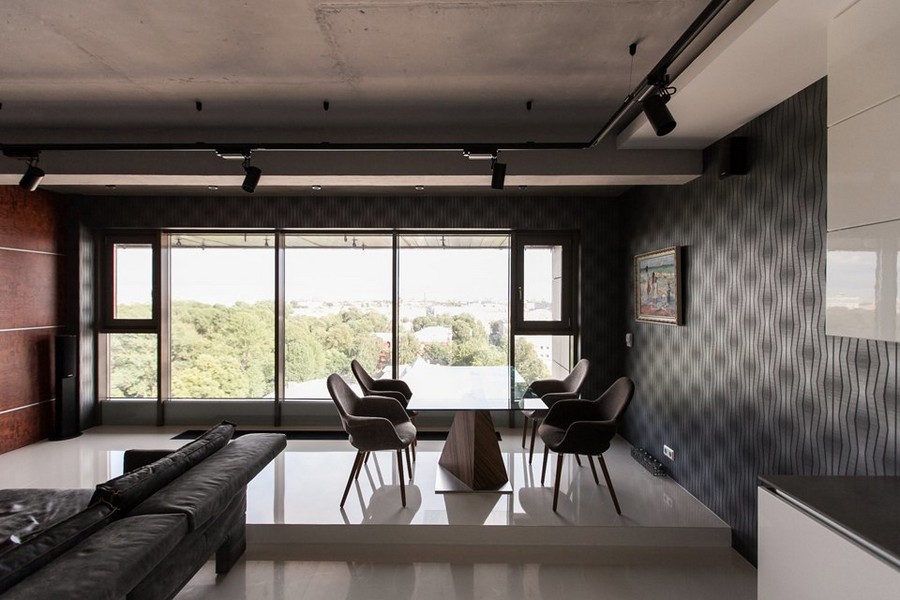 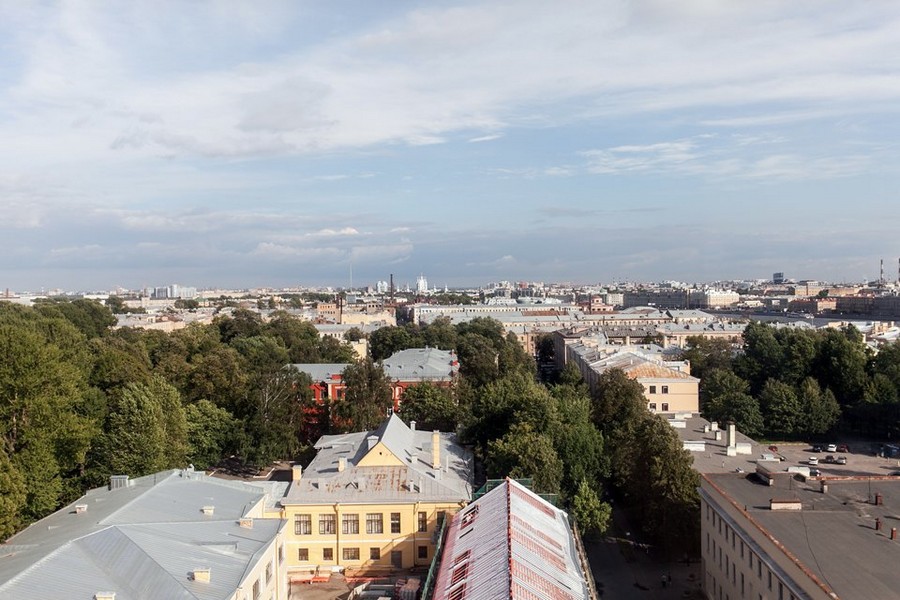 He hired a professional construction team to make the renovation, and surprisingly it was finished pretty quickly – within 4 months. For a start the balcony was made open to the living room, which allowed for arranging a full-fledged dining zone here. The latter is distinguished from the lounge and kitchen areas not just by being arranged on a platform, but also by a different type of ceiling and different lighting design. 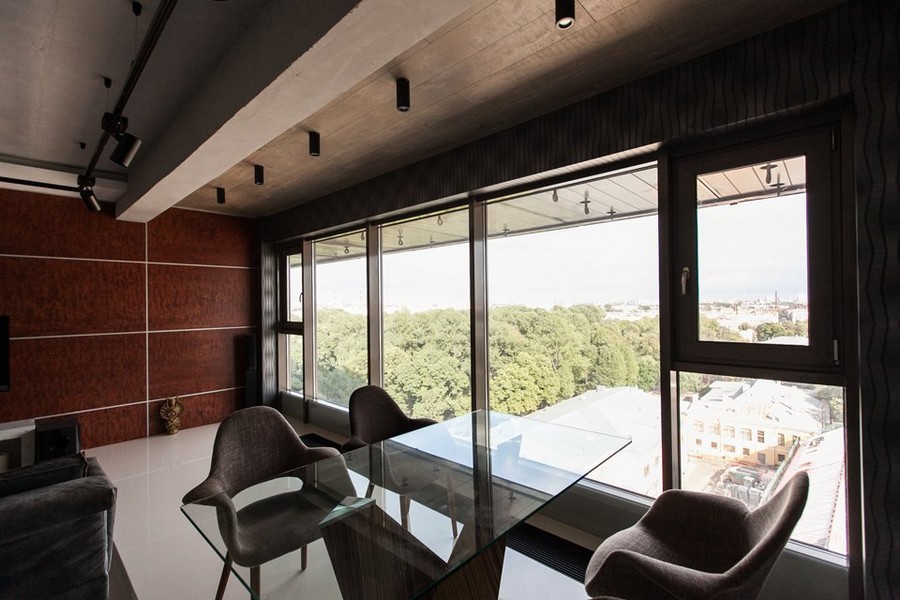 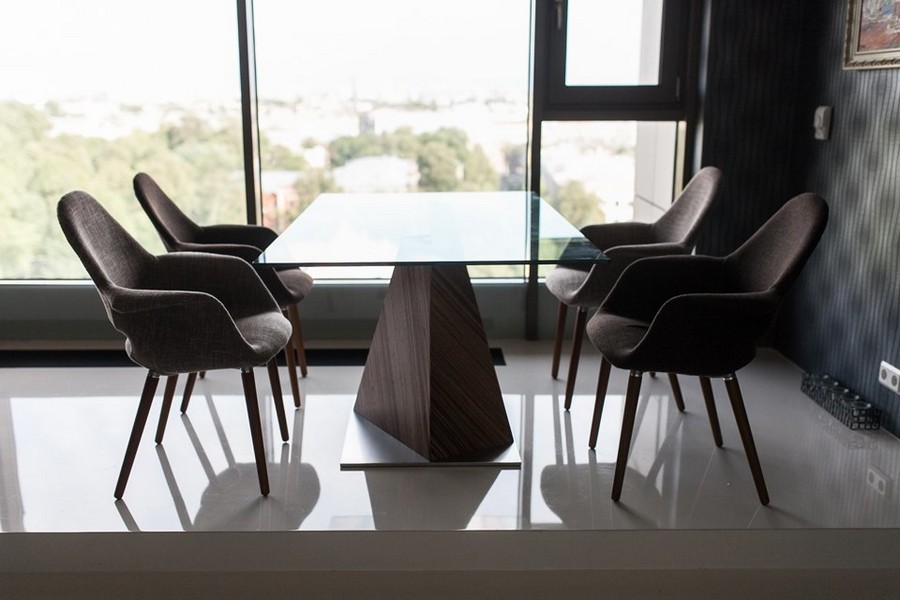 On the whole, the living room interior is not pure loft-style. In genuine industrial interiors you will not find traditional geometrical blue wallpaper and wood of such warm hue. But still many motifs applied here remind of loft style. For example, to save the ceiling height (2.8 meters) as much as possible, it was decided just to refresh the concrete slab with just one coat of paint, which kept the brutal rough texture quite visible. It’s matched by a concrete faux fireplace and complemented with track lights and an LED-band. The flooring is also typical of industrial buildings – it’s white glossy self-leveling polymeric. And for the sake of openness traditional radiators were replaced with convectors built in the floor. 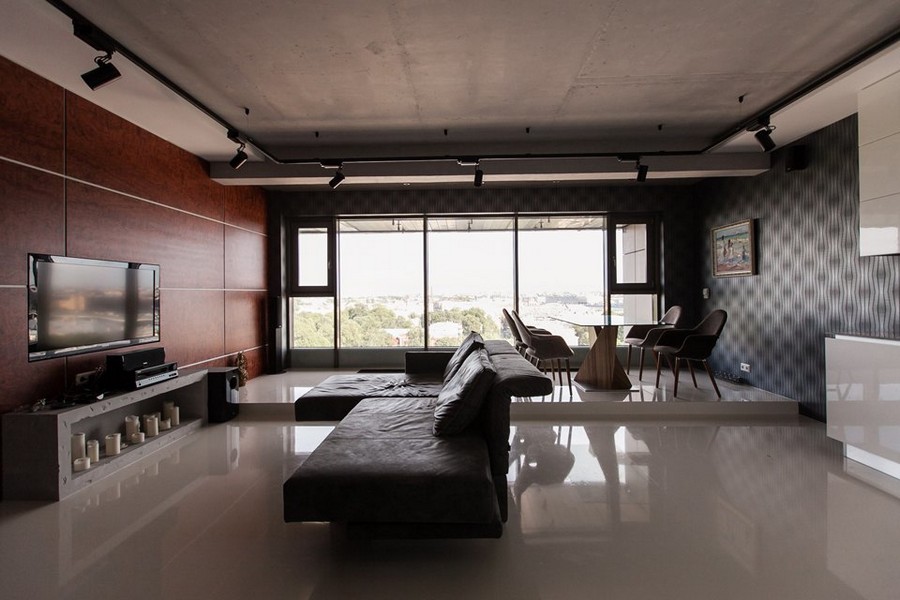 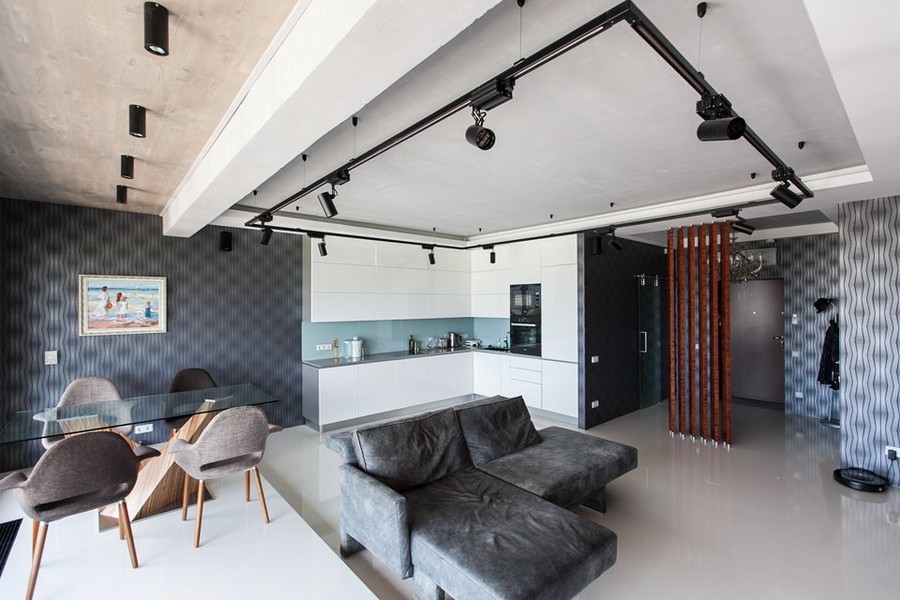 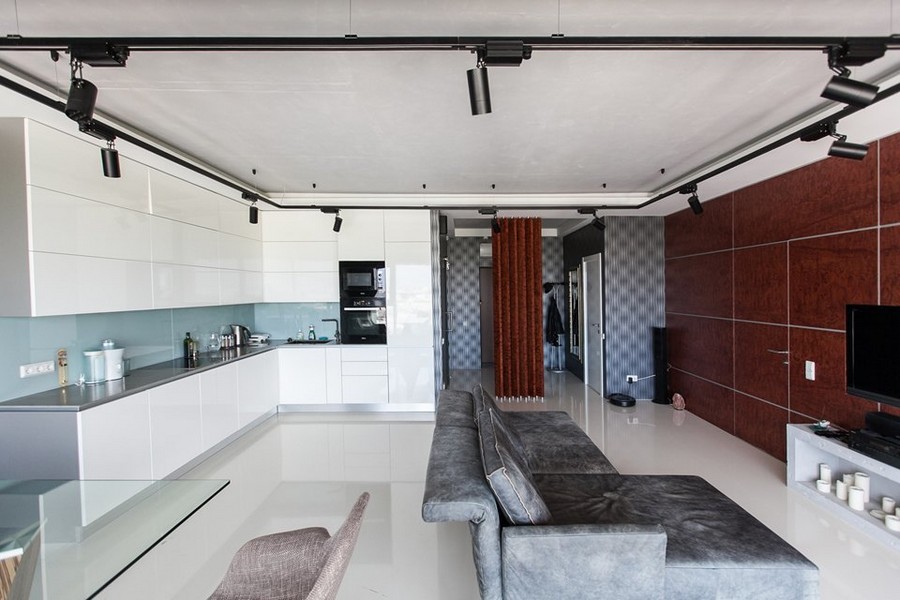 The kitchen doesn’t interrupt with the general style concept. It’s pretty minimalist, glossy and equipped with push-to-open mechanisms. The grayish blue backsplash brings all the colors of the open space together. It’s covered with a piece of matte glass. 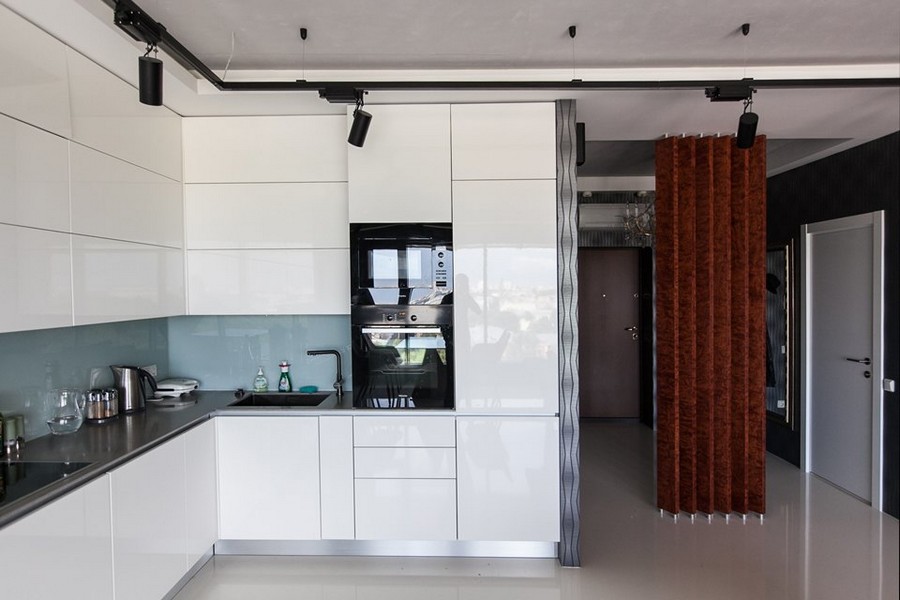 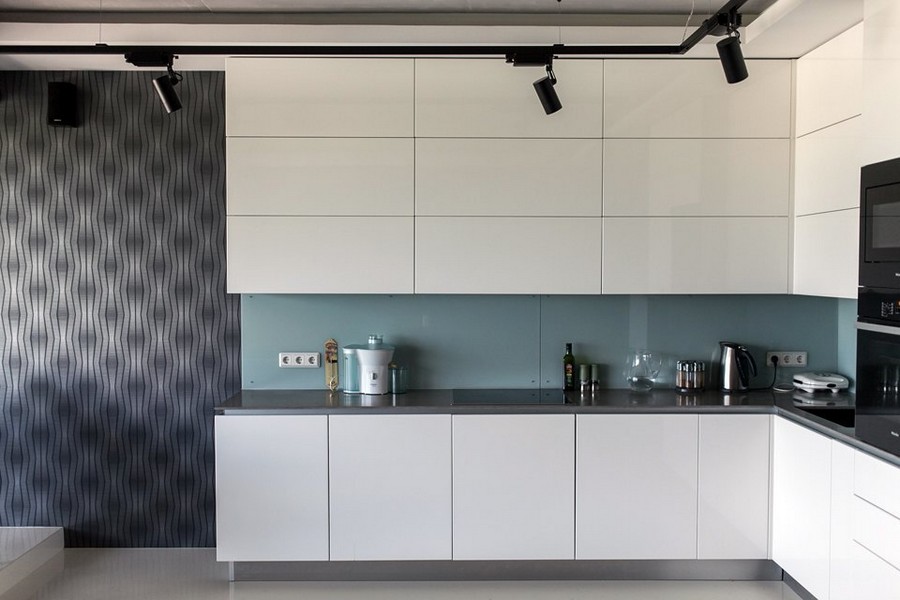 One of the warmest pieces of the lounge is the wall decorated with natural bubinga wood veneer. This wood is known for its noble look, extremely beautiful texture and recognizable reddish brown hue. Its nice aesthetical characteristics made bubinga popular in the world of luxurious products. For instance, interiors of Lexus and BMW automobiles feature bubinga wood elements, and Cartier makes the ends of its sunglasses from this very species of wood. 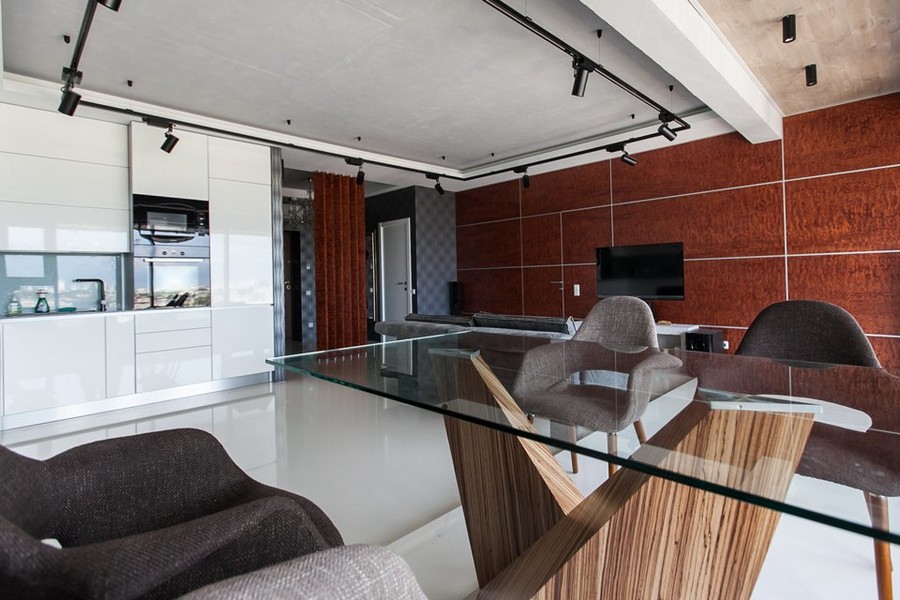 The bubinga wall has an invisible door leading to the bedroom. The latter has a podium bed at the level of glazing and built-in convectors in the floor. This room is literally united with a bathroom by means of a transparent glass wall. And one more glass partition separates the shower zone from a big bathtub. 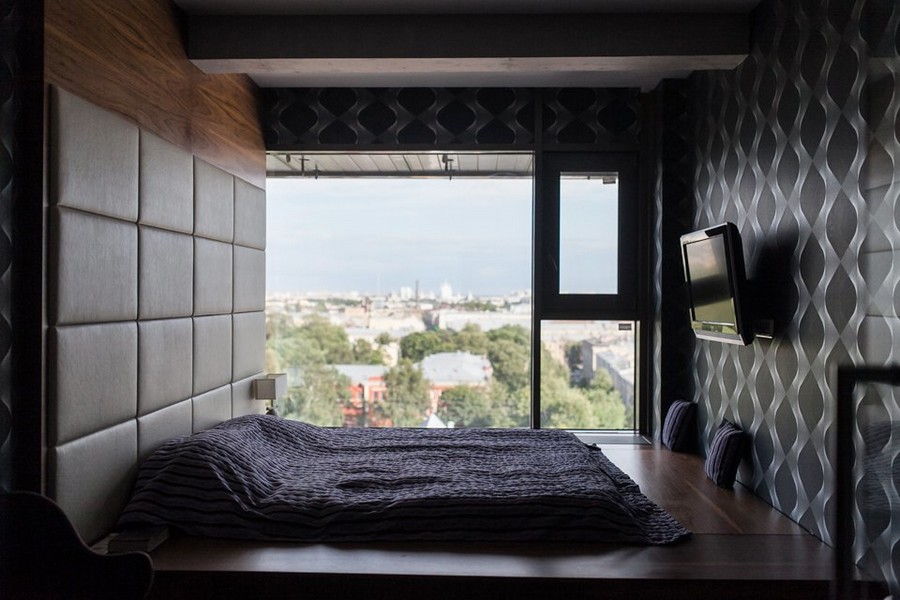 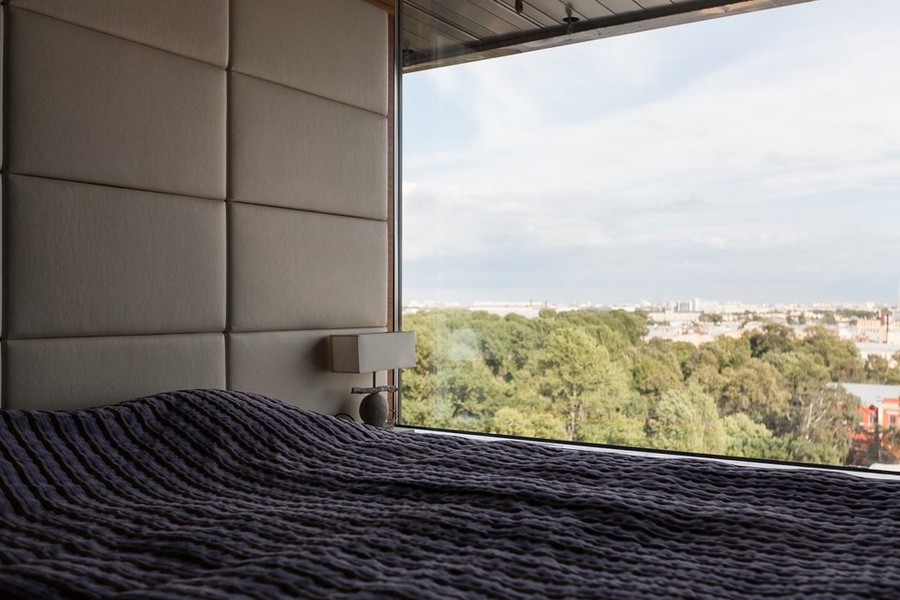 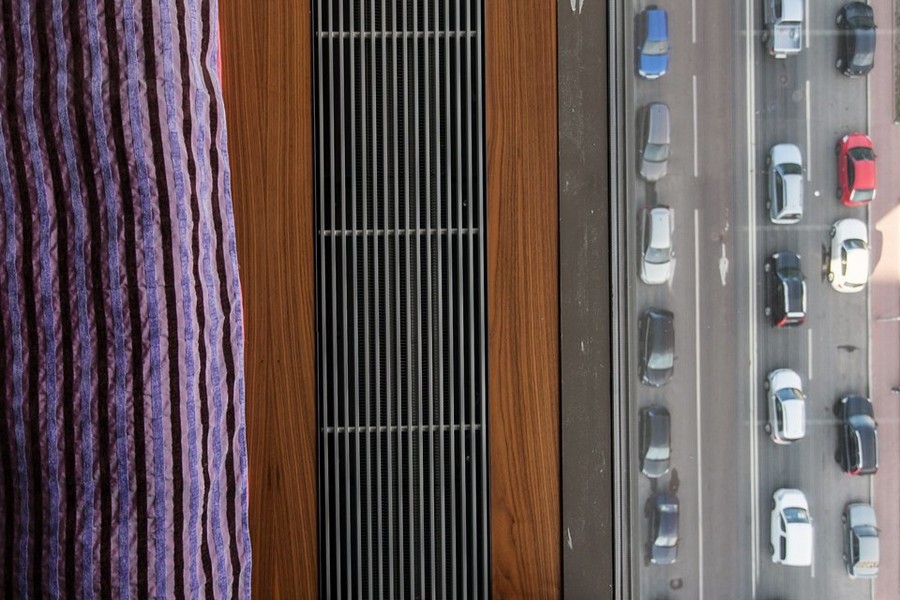 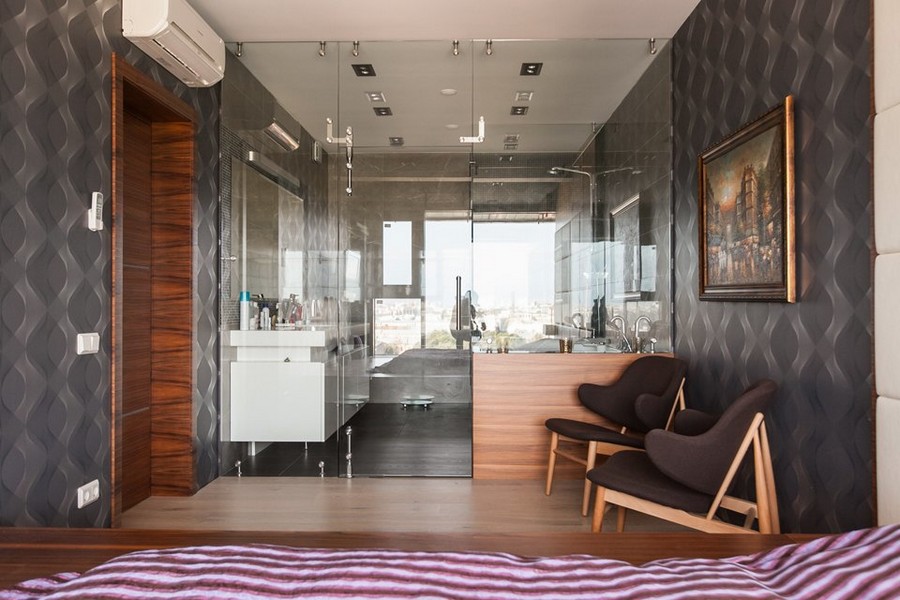 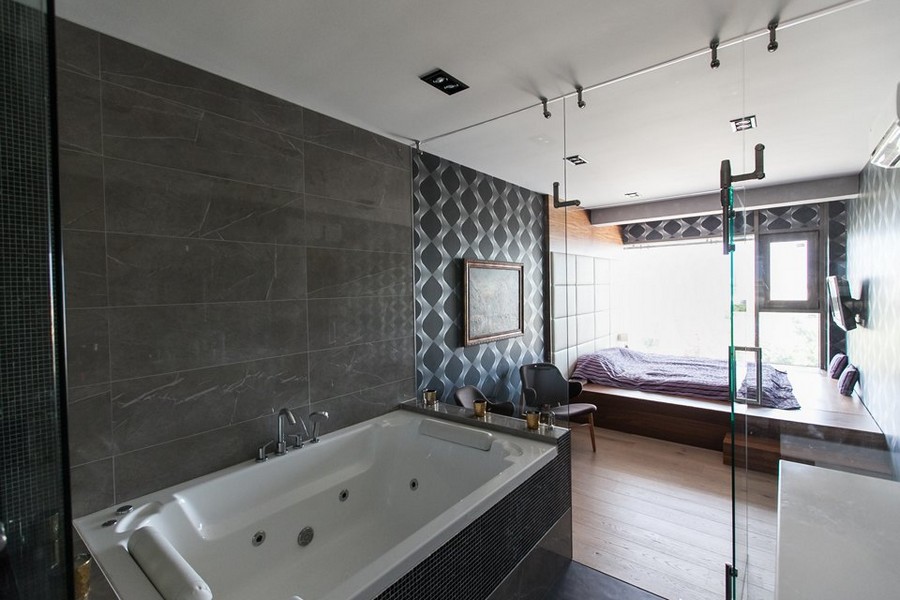 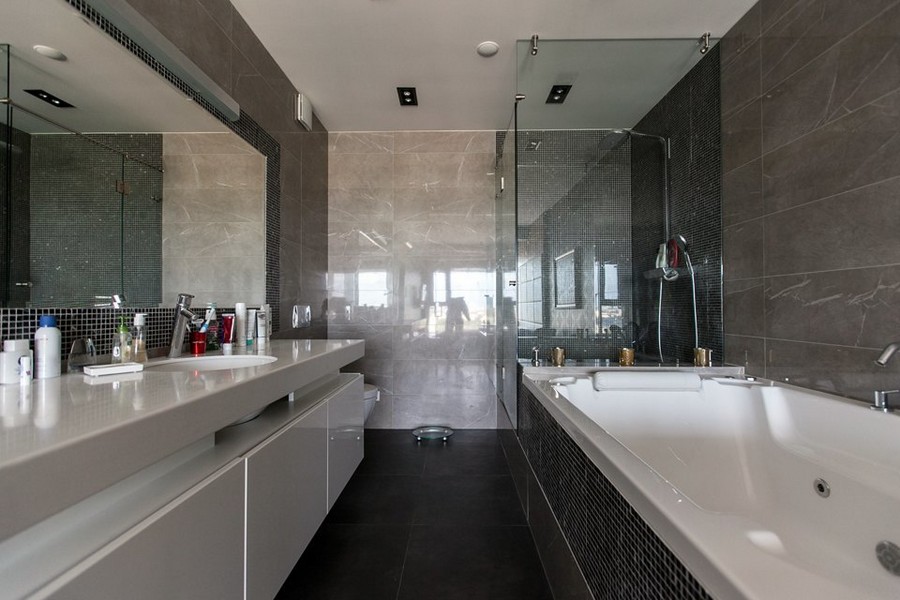