This interior design project succeeded for two reasons: the clients were very bold and ready for experiments, and the designer drew inspiration from Kelly Wearstler’s prokects. Golden ceiling in the bathroom, plenty of black and special recognizable style – even these details are enough to get interested about this apartment… 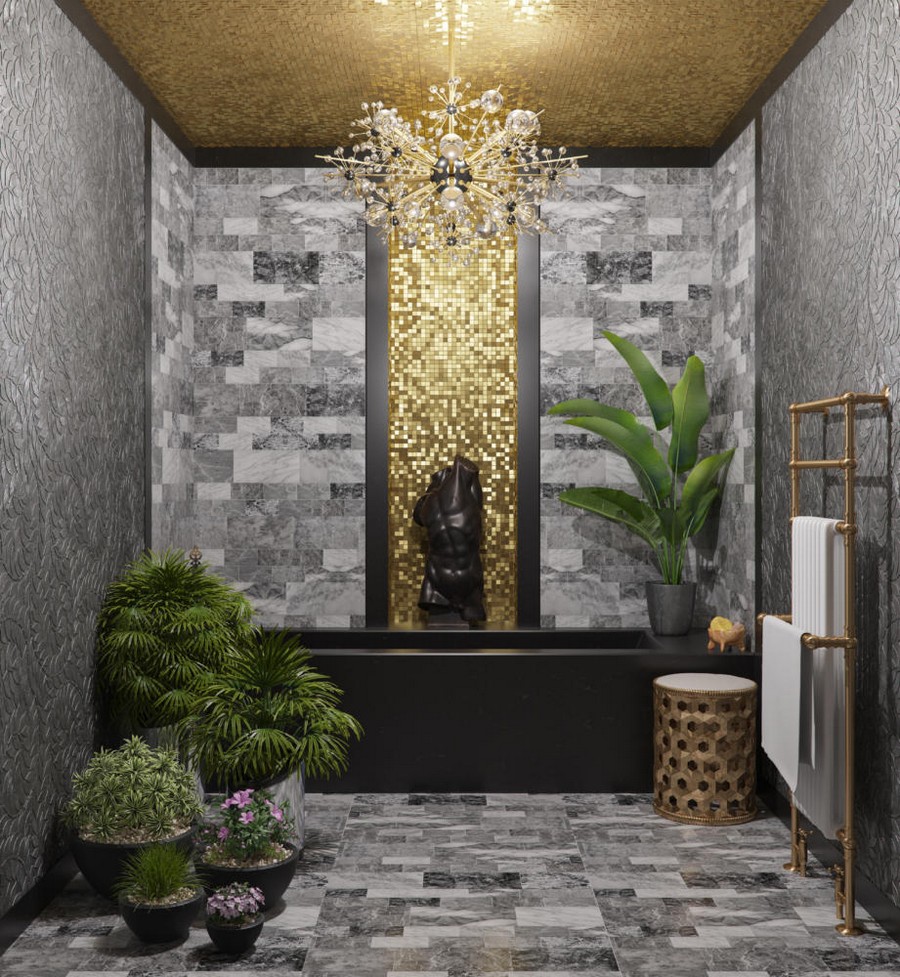 Initially this was a standard two-room apartment with two big rooms, a spacious kitchen (20 sq.m.) and a wide corridor. The clients permanently reside in a different town and this flat was purchased as a homier alternative to hotels when they come to this city on business. Due to this the masters didn’t need a big kitchen, and the latter was hence shifted to the corridor and separated from the living room by a glass sliding door. And the ex-kitchen was transformed into a work room.

One more layout modification was related to closets. The thing is that the masters do not like wardrobes, so the designer had to organize two walk-in closets. One of them was arranged by the entry, and the other was made walk-through in front of the bedroom. Such a decision has two vital benefits: there are no useless corridors in the flat and the bedroom got additional soundproofing. 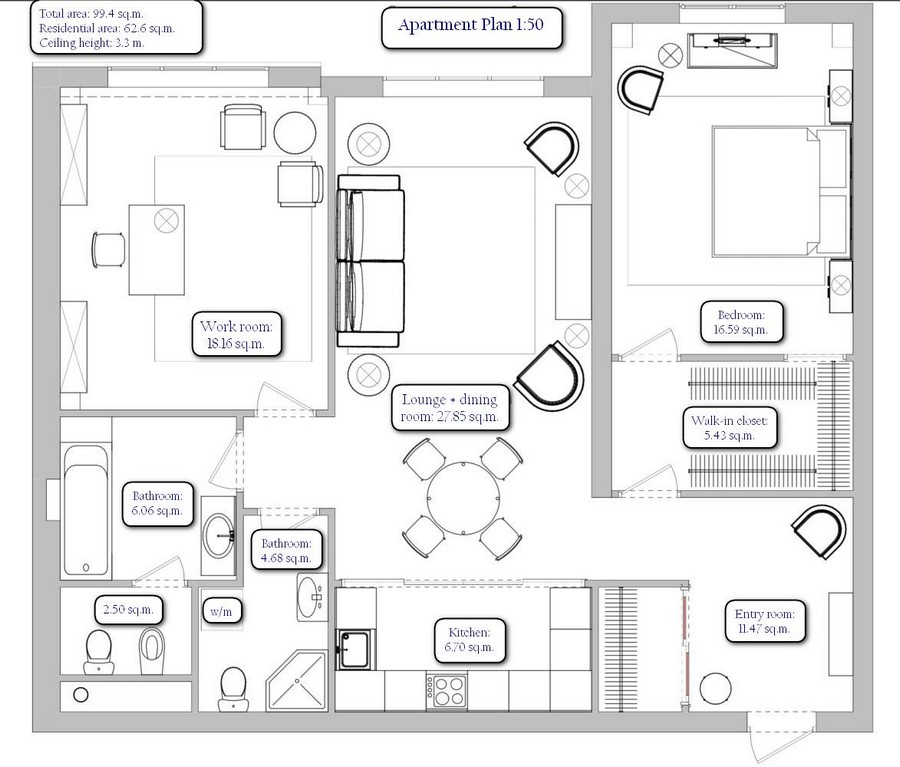 The clients were dead against bright colors –they favored only noble and quiet shades. So the interior was designed in gray, pale yellow, golden, noble green and some pink hues, which were all united by black represented in many details.

The dining set is composed of a round Christopher Guy Navour table and Zuma chairs by Kelly Wearstler. A massive chandelier by Luxxu Empire brings a finishing touch to this zone. Though designers generally say that big chandeliers are not a good choice for small rooms, especially when it comes to art-déco, here it plays the role of a centerpiece and makes the interior very special. 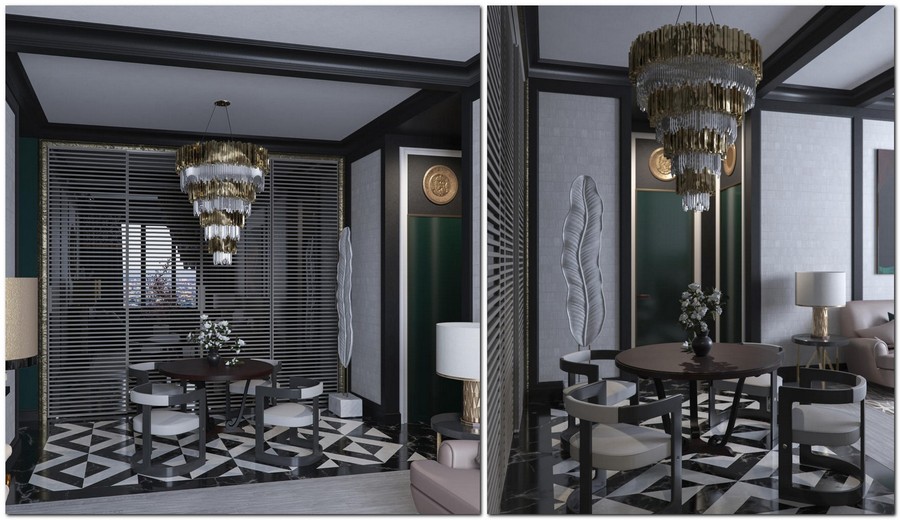 The lounge zone is traditionally organized around a faux fireplace. A quiet laconic Novecento sofa by Poltrona Frau is accompanied by a creative Bizzotto Sidney art.112 coffee table and a couple of arm-chairs of equal designs and different colors. On these very colors the living room’s color scheme is actually based.

The background is created by slightly textured white Belgian wallpaper and a gray Rug Star Dresden carpet with fanciful organic pattern. The wall is decorated by Carolyn Young’s picture “Somewhere Out There”, Circa 2000. 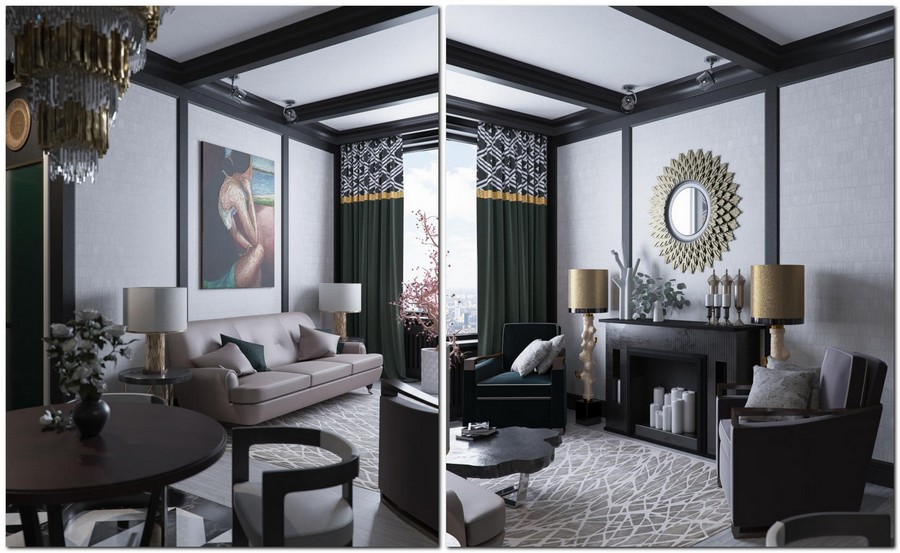 The bedroom interior design started from a gorgeous chandelier by John Richard. To match it picked were bedside lamps by Fine Art Lamps, model 737810: though they’re a bit different in terms of style, they have floral motifs and type of metal in common. 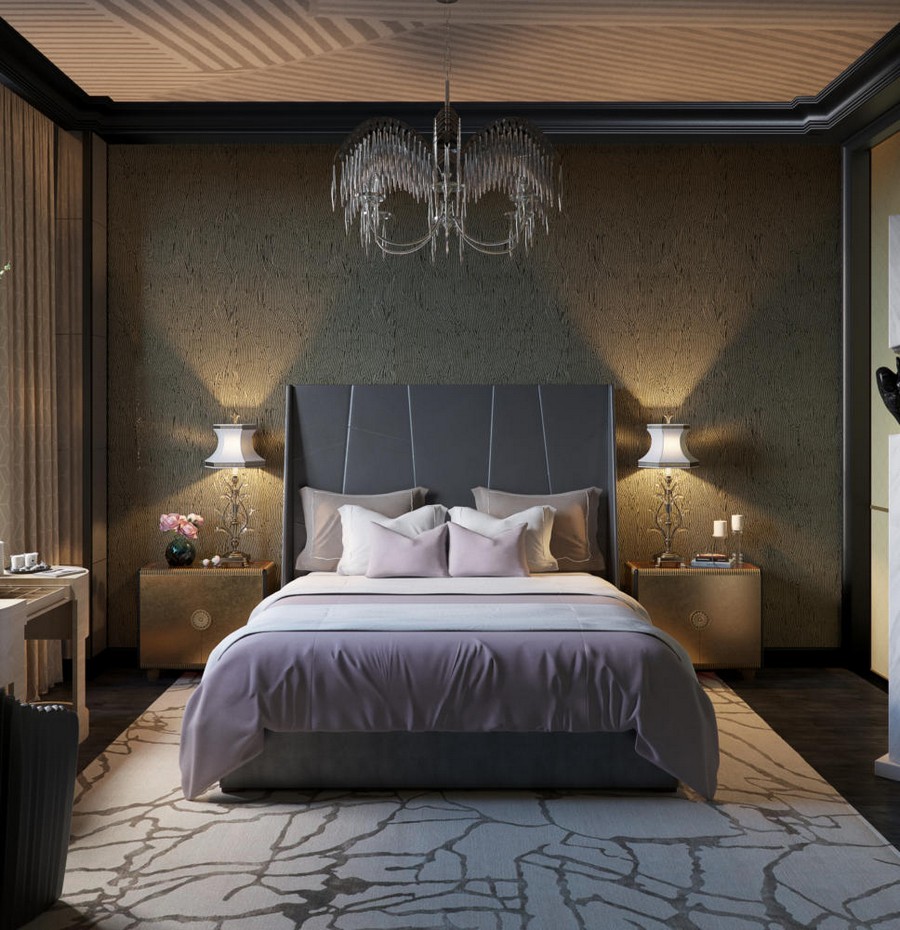 A fancifully shaped Turri DV153 dressing table by Dolce Vita will be lit by a Cleo floor lamp designed by Kelly Wearstler. The arm-chair of similar form is a Sharpei model of Nella Vetrina. The floor will be covered by a gray Tracery Rug also designed by Kelly Wearstler. And a small, yet stylish detail is a couple of decorative columns framing the window – they’re faced with aged mirrors. 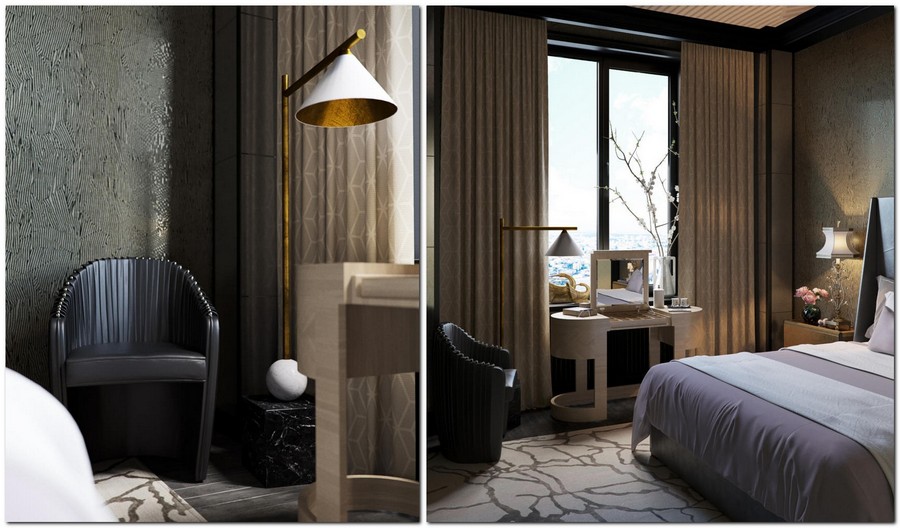 The corridor was initially very big. That is why it was possible to arrange two full-fledged bathrooms. One has a shower cabin and a washing machine, and the other features a bathtub and a toilet and bidet bowls.

The centerpiece of this bathroom is a black sculpture Statua torso by Chelini. It looks especially showily against the golden mosaic background, which gradually “moved” from the wall recess to the ceiling to balance the active black interior details. The golden theme continues in a towel-drying radiator by Traditional Bathrooms Handtuchwarmer. The rest of the walls are faced with laconic gray marble tiles and floral-theme mosaic by Jacqueline Vine Stone Mosaic. And of course, like the other rooms, the bathroom couldn’t do without a grand chandelier – it’s made by Hans Harald Rath brand. And some liveliness and freshness is added by beautiful potted plants.