We guess we won’t be too far from the truth if we say that all the designers dream about working on big apartments – in spaces with plenty of room for imagination and creativity. But what are the owners of tight areas supposed to do if they can’t afford a renovation that would cost half the price of their flat? Meanwhile they also want their interiors to be non-trivial… That’s why today we decided to show you a stylish apartment created on a very small budget but from the heart! 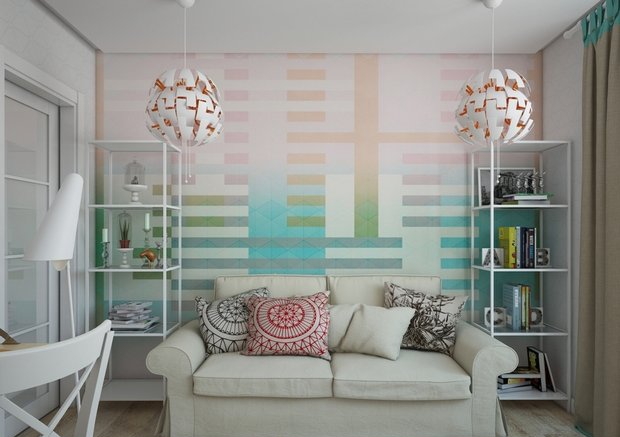 This light and sunny apartment belongs to a young family with a small girl kid. It’s located in the heart of Minsk, Belarus, in an old building of 1960s with a typical layout of that time – total area of 37 sq. m., a tiny kitchen and two rooms, one of which is walk-through.

The first and main priority was to create the sense of a big space within a tight area and get rid of a walk-through room. Thanks to structural alterations the hosts got two separate rooms – a living room and a kid’s bedroom.

And to expand the space visually, the designers traditionally opted for a light color scheme with bright accents, in particular, yellow – it is supposed to add some cheerfulness to the space and soften the “sterility” of the white walls.

The entrance hall occupies just four square meters. Into such a tight space the designers managed to fit a built-in-closet, a shoe cabinet, a compact coat rack and a mirror. 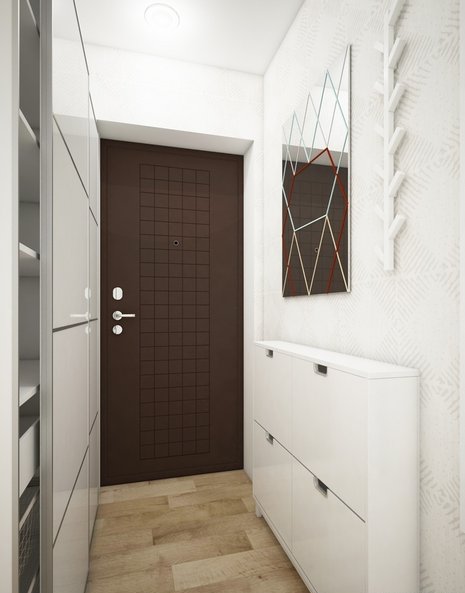 In such small apartments a living room has to be super-functional: it serves as a drawing room, a bedroom for the parents and a study at the same time. That’s why its furnishing must be as functional as possible. And the sense of coziness is created by means of decorative elements: posters, throw pillows and vases. As we already mentioned, the masters had very limited budget. But they also had a chance to bring IKEA furniture (there is no IKEA store in Belarus and people have to go to Russia or Lithuania to buy it). That is why the furniture in this apartment is either custom-made or brought from IKEA. 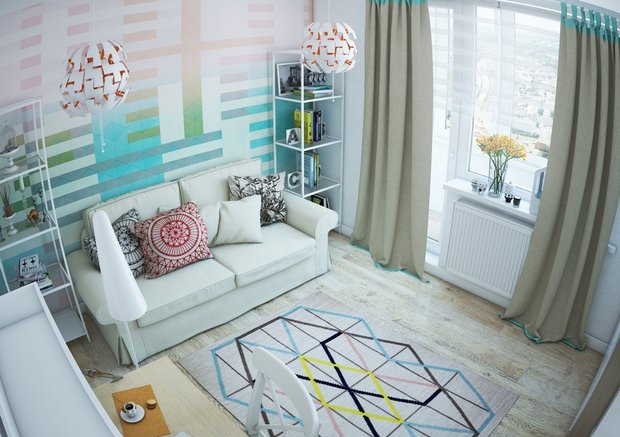 To make the space appear bigger the designers used a few tricks. Firstly, they didn’t use any customary crown moldings. Instead they lowered the ceiling a bit and left the gaps between the walls and the ceiling, which increases the visual wall height. Secondly, they opted for symmetrical furniture arrangement. And thirdly, laminate and floor tiles in the flat are laid across the rooms. 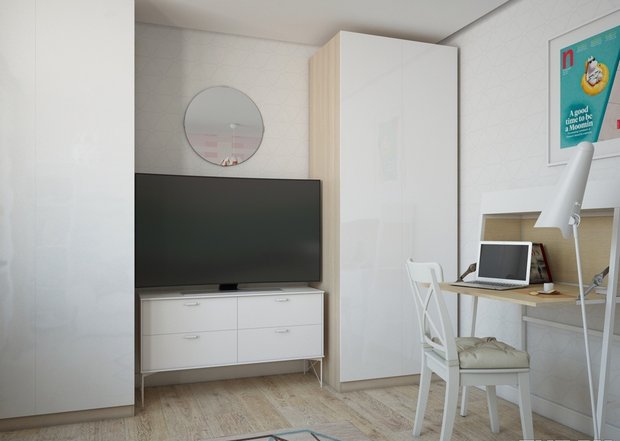 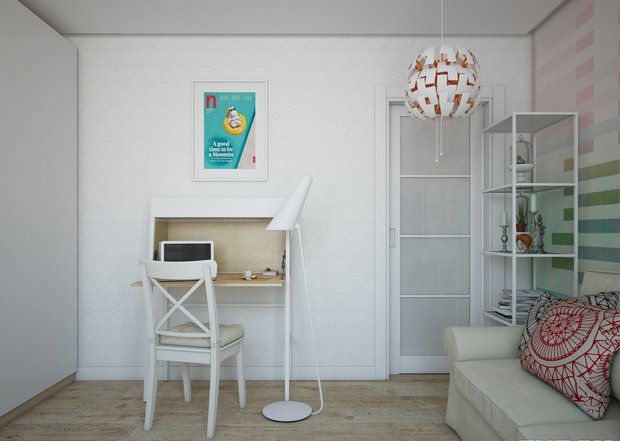 In the kid’s room the precious space was saved by means of a loft bed with a built-in desk and storage drawers built-in underneath. The desk has three height options for different ages. Also there is a corner wardrobe and a compact drawing unit for small stuff. The accent in this room is made on a wall mural. The resulting interior is a comfortable fairy-tale room for a small princess where everything is at hand and there are no extra items. 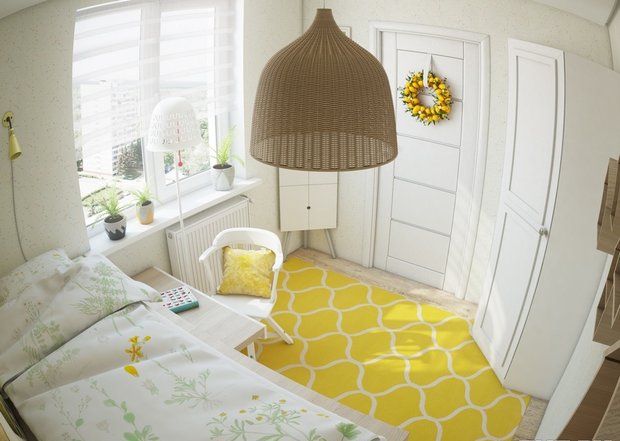 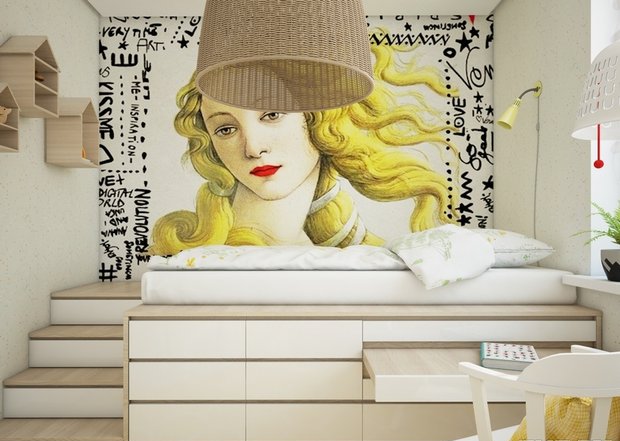 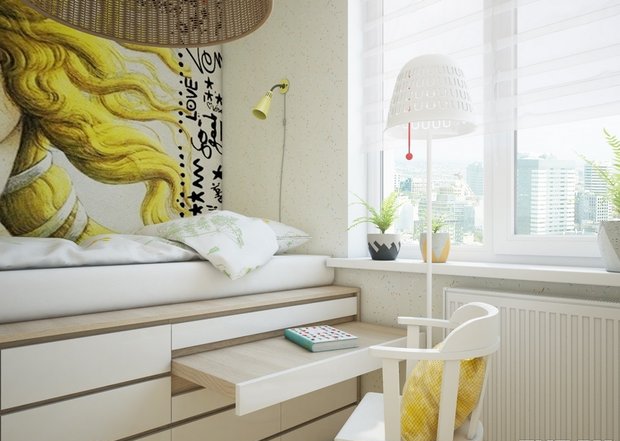 Having removed a walk-through door between the living room and the kid’s bedroom, the designers had to envisage a new doorway and think twice about how to design the kitchen and dining set. Besides, there was a non-standard window in the kitchen.

In the end these problems were handled by means of a wide countertop installed instead of a windowsill, a transforming table that is enough for a family of three when folded up and can be transferred to the living room when guests come, and built-in appliances: a fridge, an oven, a microwave oven, and a dishwashing machine. 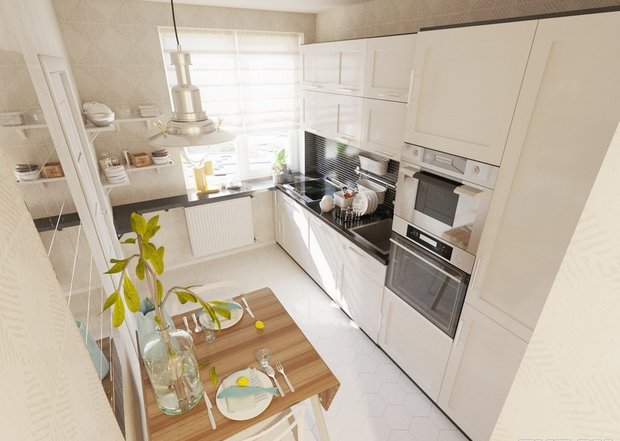 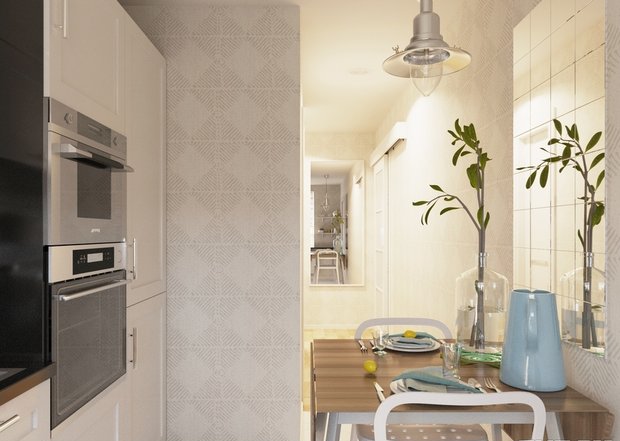 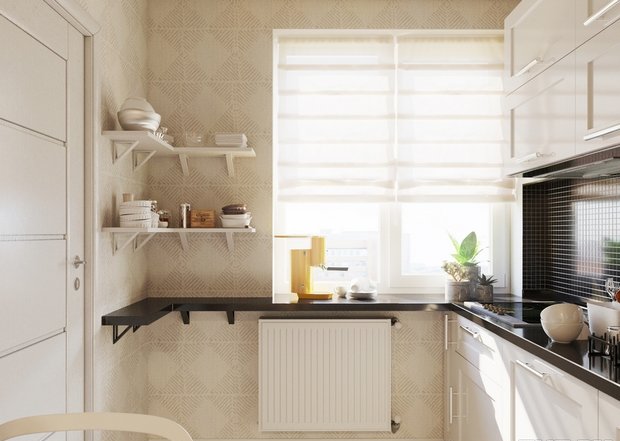 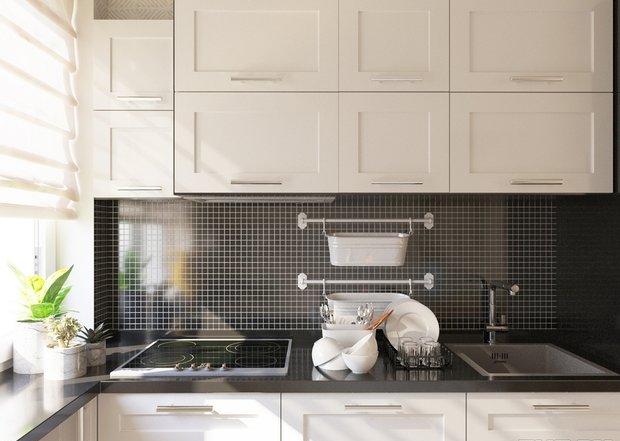 The loggia was extremely tight and the key point was to keep it as open as possible. In this project it’s a cozy nook furnished with folding chairs and a compact coffee table, where the hosts can drink tea and enjoy the city view. And just like in the kitchen, a mirror is arranged here to make the space appear bigger. 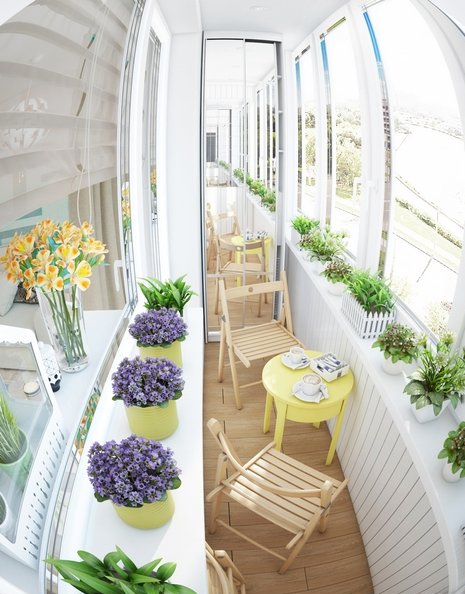