This apartment interior is a fruit of work of a Taiwanese design company A Lentil Design. It was created for young spouses and traditionally for this company this project was given a name. The name is “Minuet”, and not just any minuet is implied here, but a particular one, composed by a famous Italian cellist and composer of the 18th century – Luigi Boccherini. 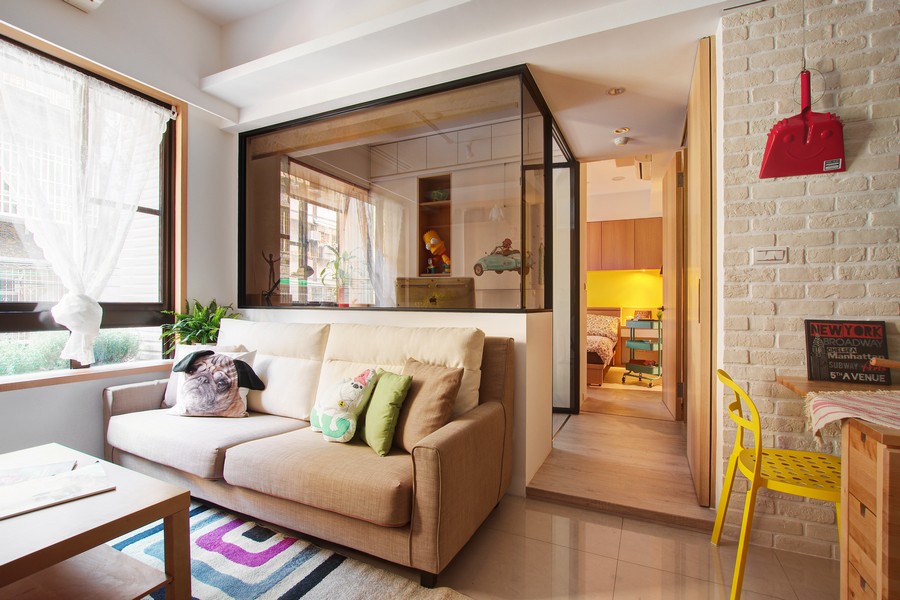 A minuet is a gracious social dance that takes its roots in French balls of the 17th century. Composed of tiny steps and usually having very lively and cheerful mood with slight lyrical inclusions, this dance was extremely popular at that time. And despite the fact that Boccherini was a very prolific composer with a few hundreds of musical compositions, the most recognizable work of his is a minuet. It sounds in many world famous movies and gains more and more admirers thanks to its simplicity and perfect balance between cheerfulness and lyrics.

Perhaps, we won’t be wrong to say that this apartment interior can be characterized by the same features. It’s fulfilled with light surfaces – plenty of storage zones in light natural wood and very naturalistic beige floor tiles – that make it quiet and gracious. Just like a minuet dance seems to be in some parts of it. At the same time, the “music” of the space is brightened up with eye-catchy details in red, blue and yellow. They stand for the lively and cheerful mood of the dance. At the same time they are not too many and pretty balanced by neutral background, which prevents the inhabitants from feeling tired. 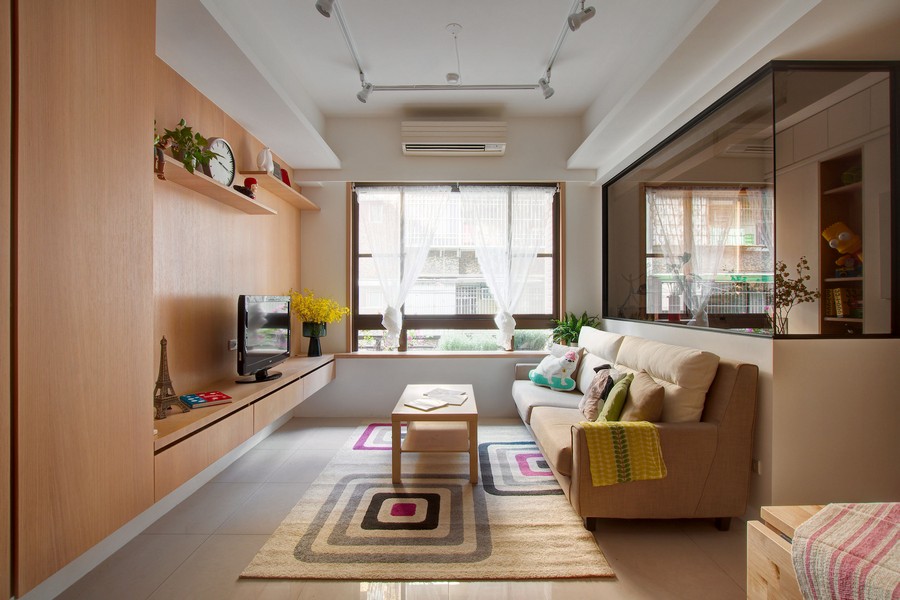 According to the authors of the project, they were primarily given a task to improve the utilization of space in this small apartment, considering the living habits of the young family.

So, as a matter of priority they ensured that the design they create would be multifunctional. With this concept in mind a small study between the living room and the master bedroom was furnished with mobile pieces that can be flexibly re-arranged for the current needs of the spouses. In particular, this room will be re-designed as a kid’s room in the future. And it’s especially nice that it will be next to the parents’ bedroom and separated from it at the same time.

One more interesting detail about this tiny room is the interior window it has. This trick was designed for the sake of more openness and visual expansion of the living room space. At the same time, when the user of the study needs some privacy, he or she can easily draw the roller blinds to get an isolated work area. To crown it all, the wooden window frame has an important decorative role, being kind of a real picture in the living room. 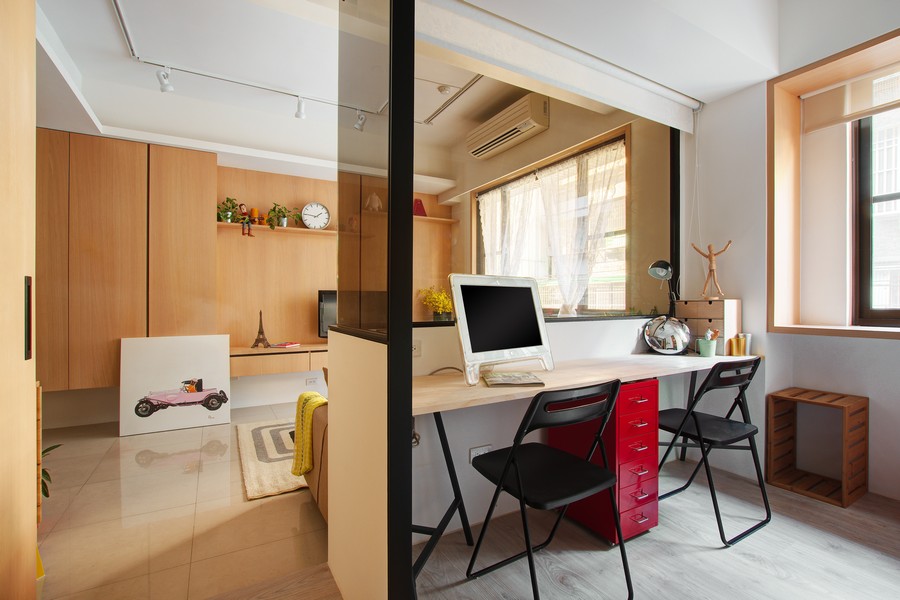 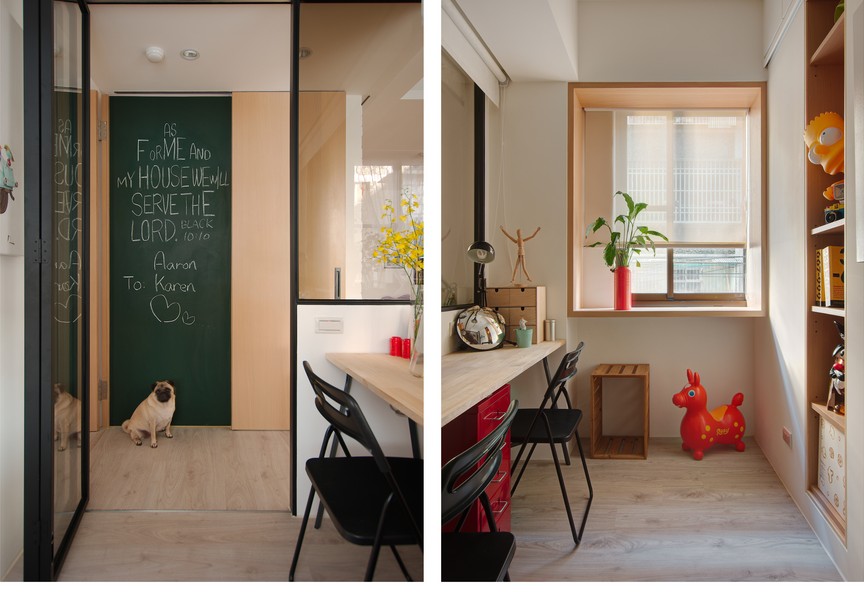 Another step to multifunctional design was the organization of several storage zones: in a large built-in closet in the living room, in a walk-in closet that was arranged by means of shifting the balcony wall, and in the bedroom, where the designers managed to engage the areas both opposite and above the bed, in suspended cabinets. An important thing is that the storage systems are closed, and hence the space looks very neat and tidy.

On the whole, the interior appeared to be very airy, spacious, functional and balanced: being quite neutral on the one hand, it reveals personalities of its inhabitants in small details. 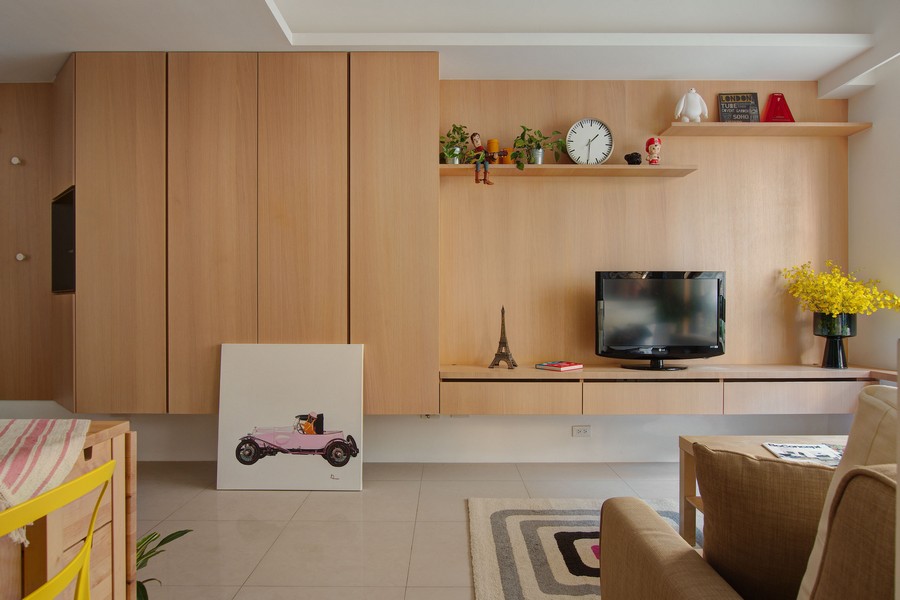