The architect who designed this house was tasked with creating a contemporary-style building that would harmonically communicate with a pretty narrow, elongated plot of land with tremendous altitudinal variation. Beyond that it was supposed to be functional, energy-efficient, and environmentally friendly. To crown it all it had to be constructed extremely fast, at a reasonable cost and with frame architecture. And 118 days later a land plot in the suburbs of Minsk, Belarus, already featured an original object dubbed “Copenhagen”. 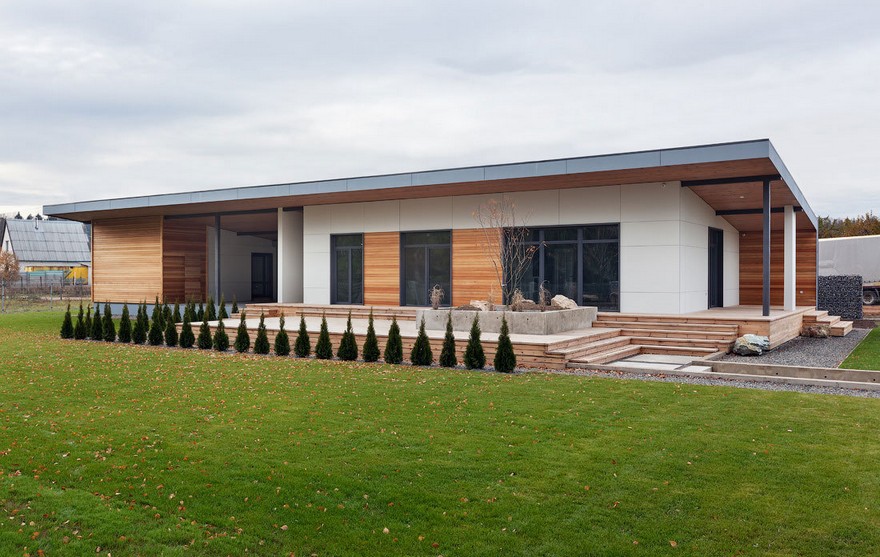 The project received such a name by associations – minimalist-shaped, with an as-flat-as-possible roof, an interesting architectural ensemble of terraces, overhangs and lean-tos, it has incorporated many Scandinavian-style features. Besides, it overlooks a big forest, which complements and accentuates the Scandinavian motifs.

The external finish of the house is one more way to emphasize the style of the project: a standing-seam metal roof with minimal inclination gradually transforms into one of the walls, the face of the building is finished with light large-scale wall panels, and the flooring and ceiling of the terrace are made of larch wood. 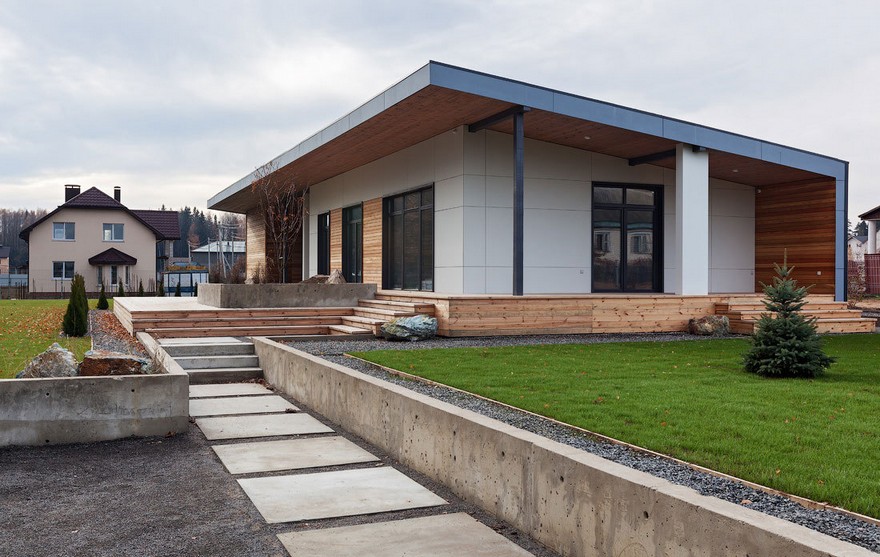 The client insisted on joining all the functional zones – a residential area, a garage and all service areas – under one roof. Such an architectural trick obviated the need for additional constructions within the outdoor territory and cut the distance travelled daily by the inhabitants of the house. In terms of layout the most logical decision was to opt for an enfilade type, with all rooms arranged consecutively, one after another.

It’s worth mentioning that the architecture of the house was to a great extent pre-determined by the shape, dimensions and location of the land plot. Being narrow, elongated, and with a difficult terrain, it implied the dimensions of the house should be in line with its geometry. It took 400 fully-loaded trucks with soil to correct the terrain, but the architect and the clients believe it was worth this. Now the outdoor territory looks like a continuation of the living room flooring when you’re inside the house. 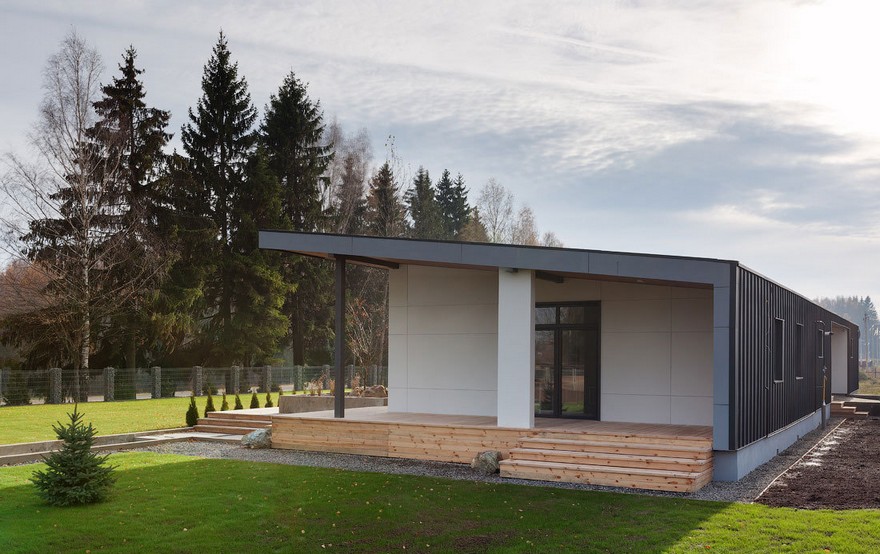 The house was placed in the immediate vicinity of the land plot border, so that panoramic windows overlooked as open space as possible and gave the inhabitants a splendid forest view. By the way, the overhang is designed so that it gave enough shadow in summer time, when the sun is high in the sky, but plenty of sunlight during the cold season. 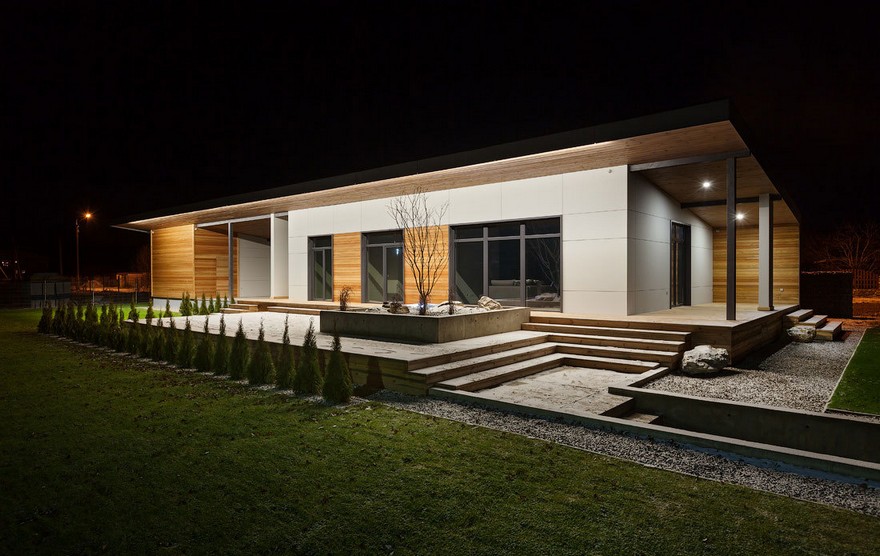 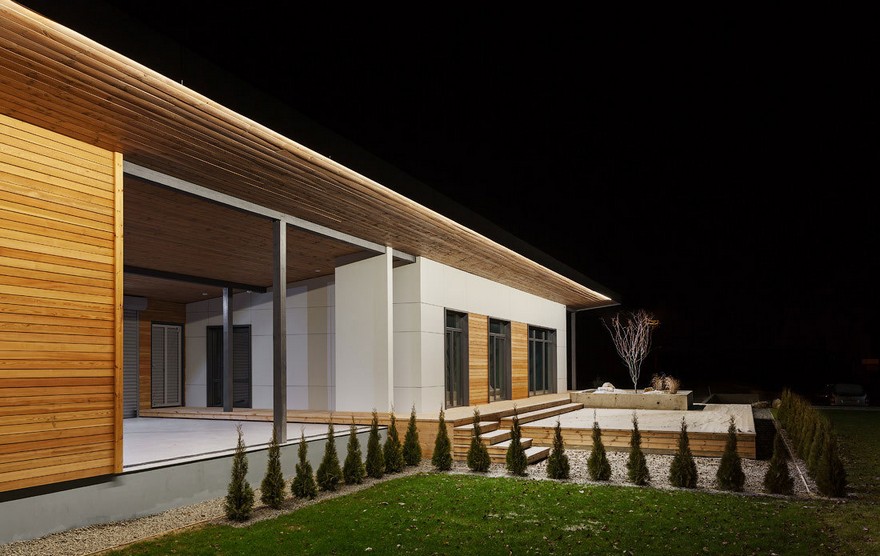 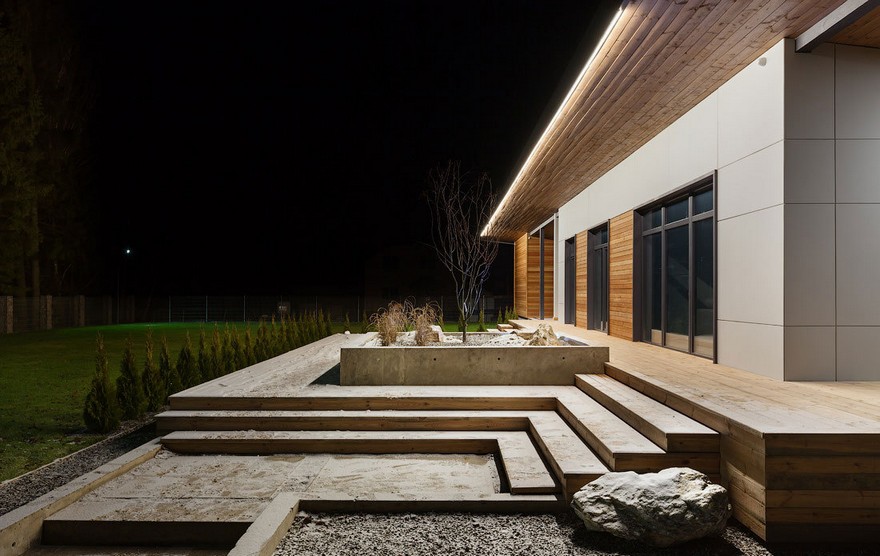 As for the landscape design, it can be characterized as pretty laconic – most of the territory is occupied by a lawn. Garden paths and load-bearing walls are made from polished concrete and gravel filling. And to escape a melancholic northern mood, the landscape designers added a group of small green thujas.

Along the perimeter the territory is fenced with wire netting, which gives a good visibility from the panoramic windows. And to add some decorative feature to the fence, it was based on gabion posts filled with crushed stone. 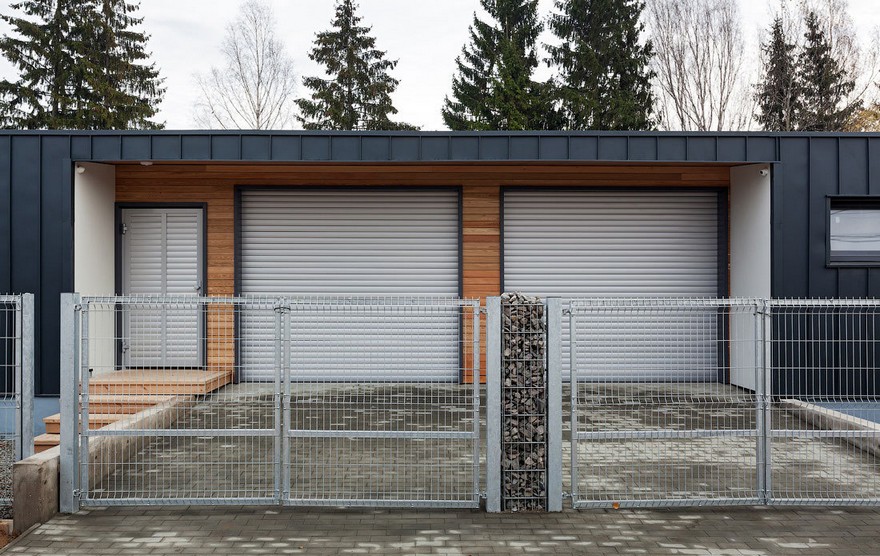 With energy-saving point in mind, the house was constructed with a sufficient layer of wall and ceiling insulation and energy-efficient windows. Besides, there are just several radiators in the house – most of the rooms have underfloor heating.

To cut the assemblage period, most of the wooden elements of the house were produced in a workshop and had to be just assembled on-site. Eventually the project was completed within just 118 days. In this 76-second-long video you can enjoy the house building process chronicles: