Brutal Bachelor’s Pad Designed in Style of a Whiskey Bar

The owner of this three-room apartment with the total area of 91 sq. m. is a top manager of a big company. And a bachelor, by the way. On purchasing a new apartment he remembered that his old friend Natalie is a qualified architect and asked for her help in designing his new home. 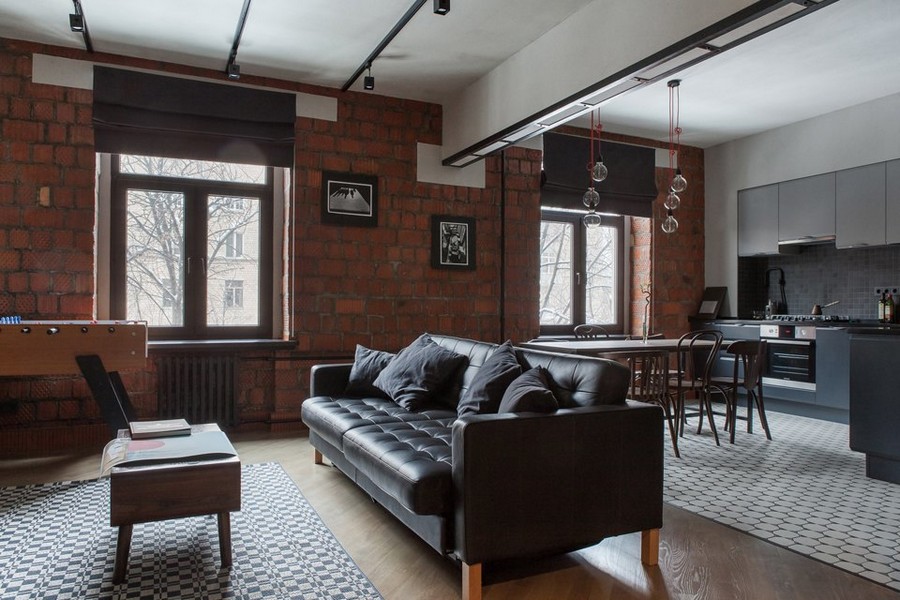 Traditionally for single gentlemen, the main client’s wish was to have a big lounge for spending time with friends. For this sake the wall between the living room and kitchen was torn down. In terms of style it was determined to stick to casual and laconic interior solutions with minimum décor in black. Home textile pieces are all natural and bespoke. On the floor preserved was the old oak parquetry; it was just a little bit refreshed with a different paint color. The entire project was completed within just 4 months. 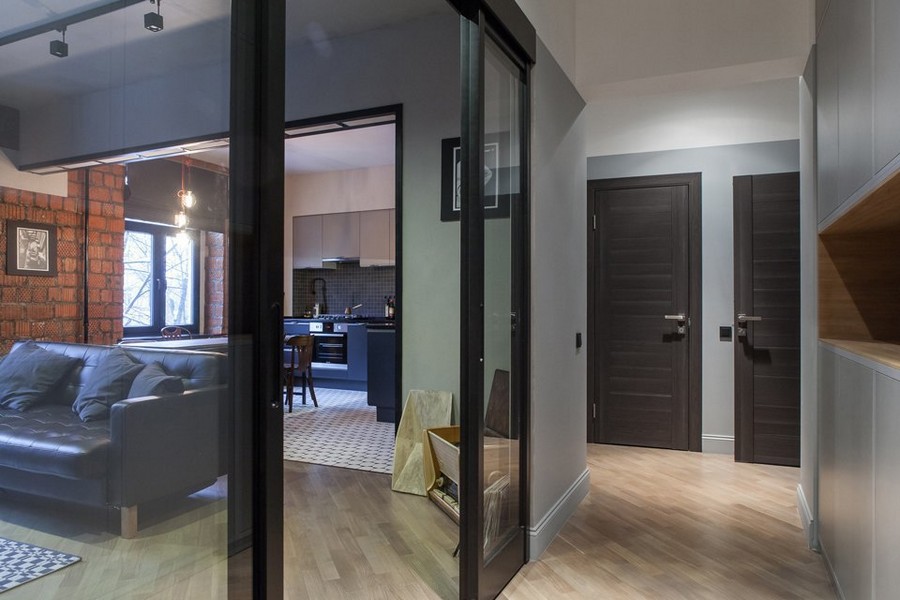 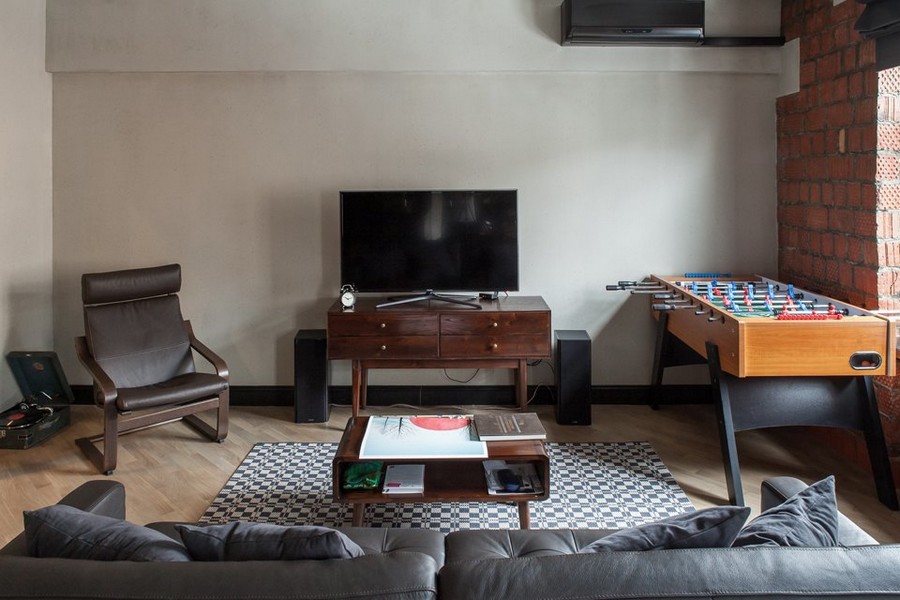 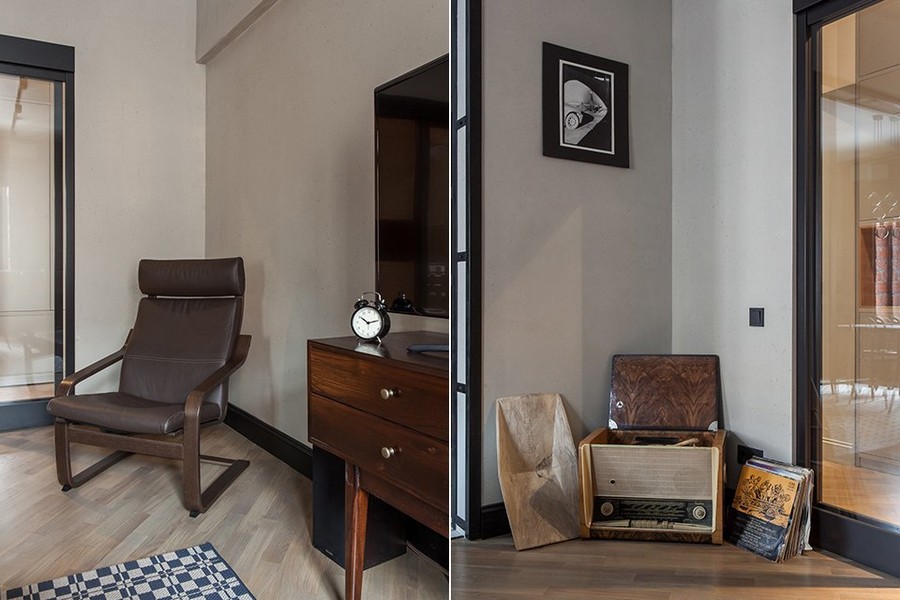 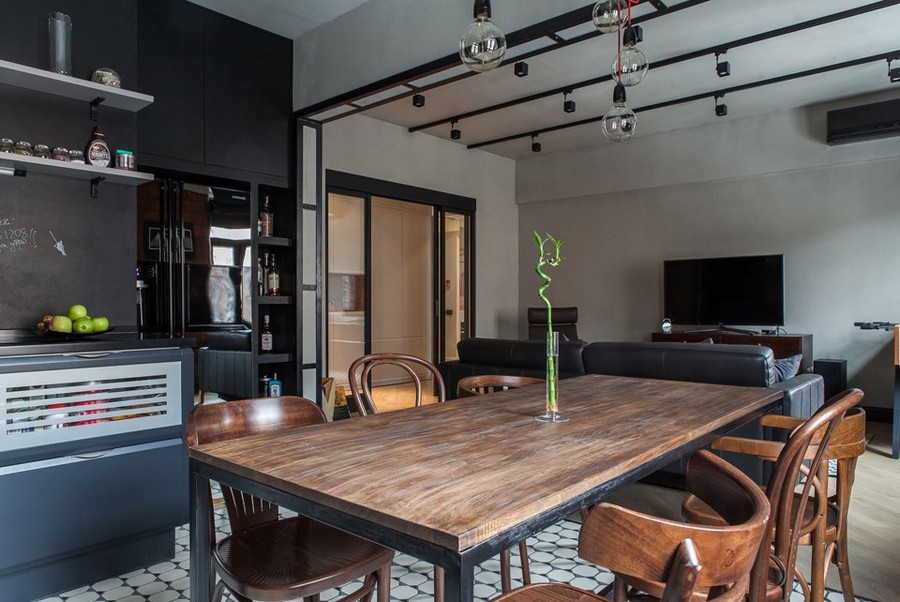 Though the entire flat is designed in a monochrome color scheme, it features two accents as well: a brick wall in the living room and floor tiles in the kitchen. The brick wall was cleared of old plaster and kept like this, despite the fact that the bricks are actually building, not facing ones. The rest of the walls in the lounge zone were finished with decorative plaster with faux concrete texture. As for the kitchen, here the choice was set upon magnetic chalkboard paint. Radiators were replaced with cast-iron retro models and painted black along with the pipes. The floor tiles are stylized as the Mettlach ones and bring some liveliness to the room. The dining table is custom-made; it’s lit by a group of trendy industrial-style lamps with exposed bulbs and red wires. Mismatched chairs are made in a common color palette, and hence do nor break the harmony of the dining set. All of these details helped Natalie to create in this open space the atmosphere of a small cozy whiskey bar. 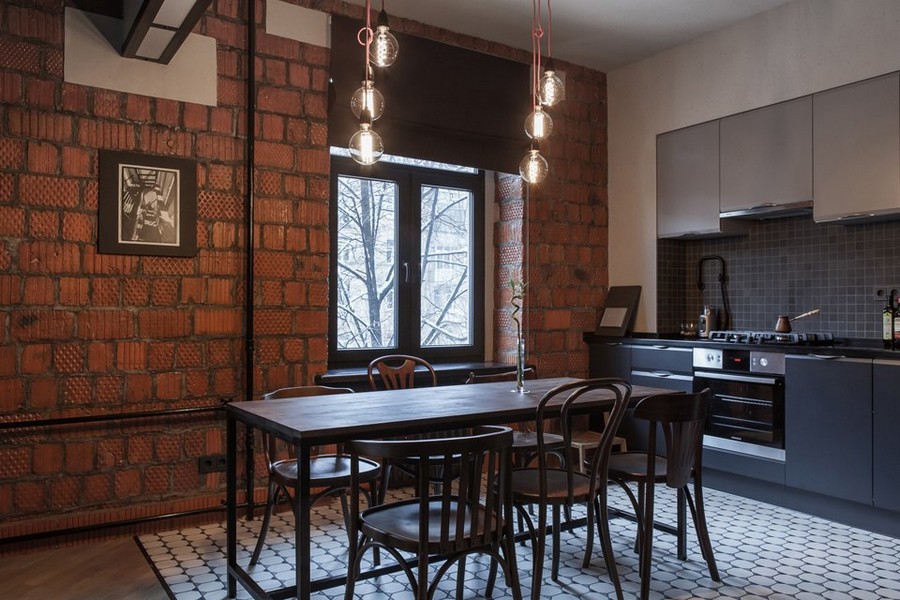 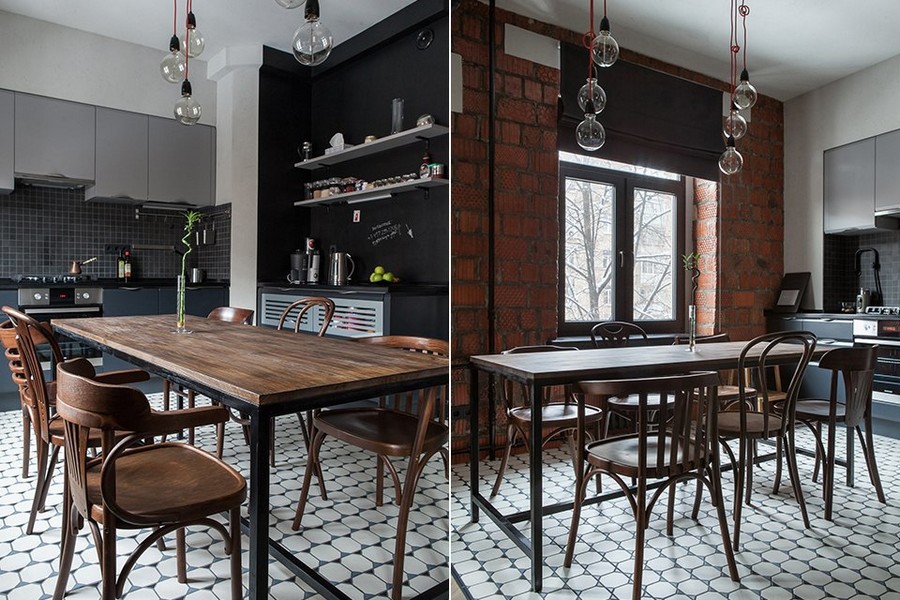 In the rest of the rooms – bedroom, study, bathroom and corridor – the furniture is entirely custom-made. In the study it is made from light timber. The work area was organized in a wall niche by the entry and lit by a couple of austere black track lights. 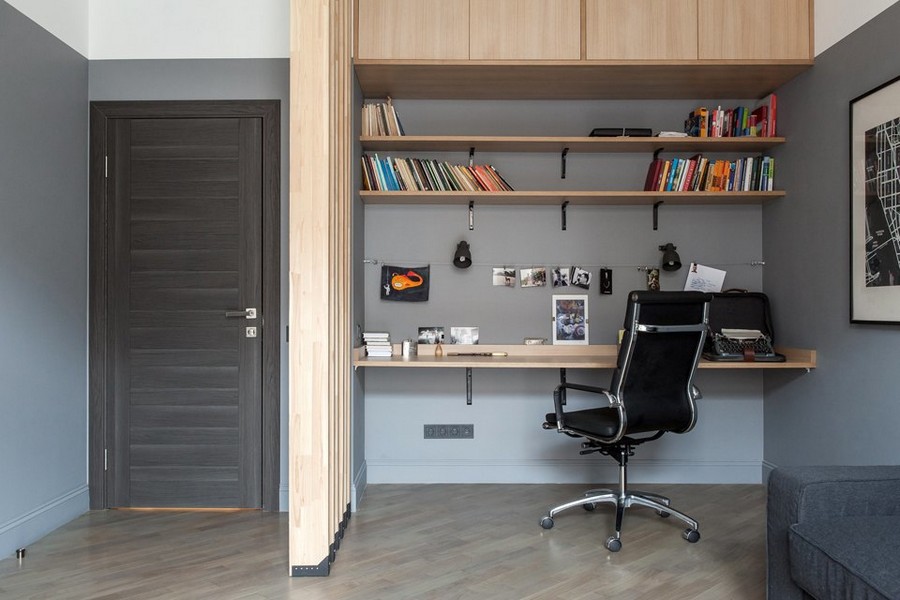 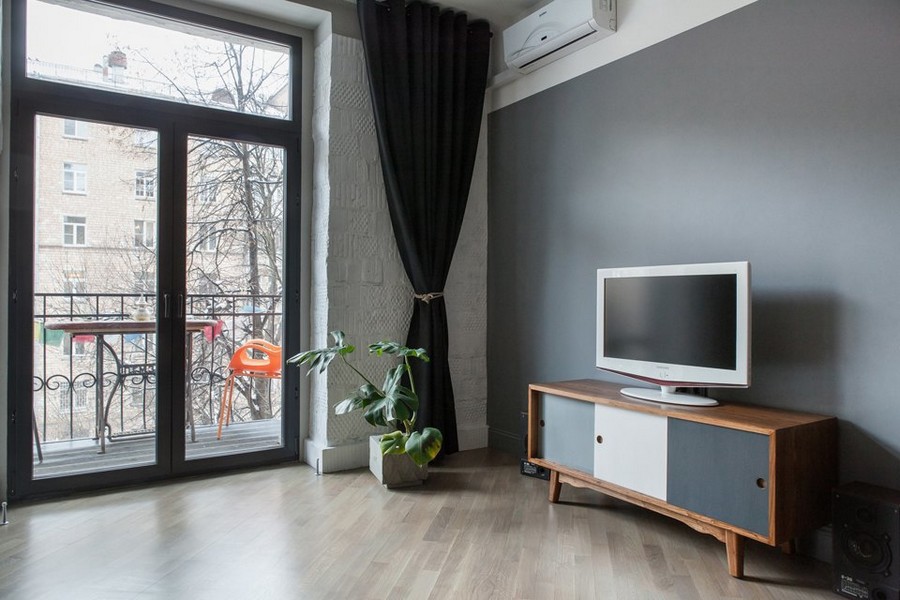 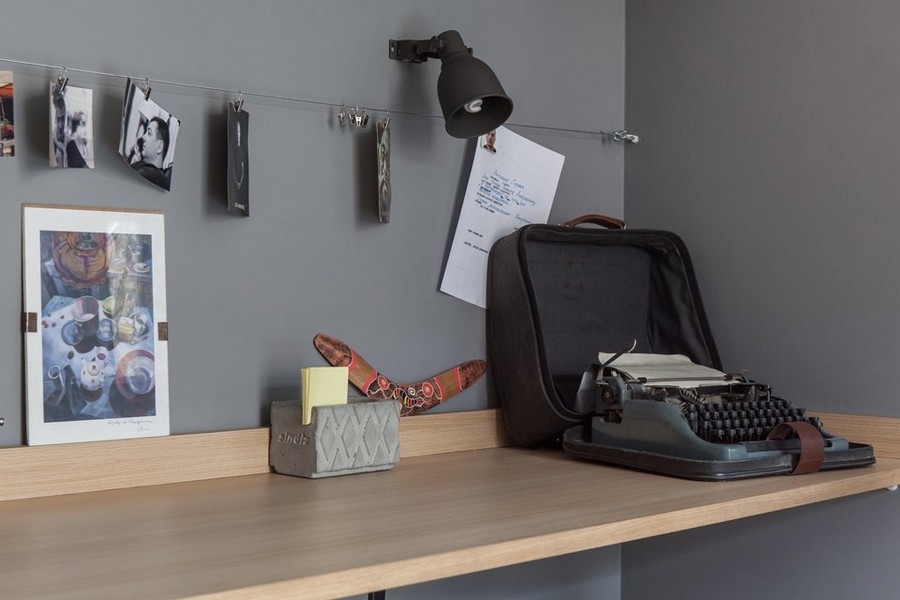 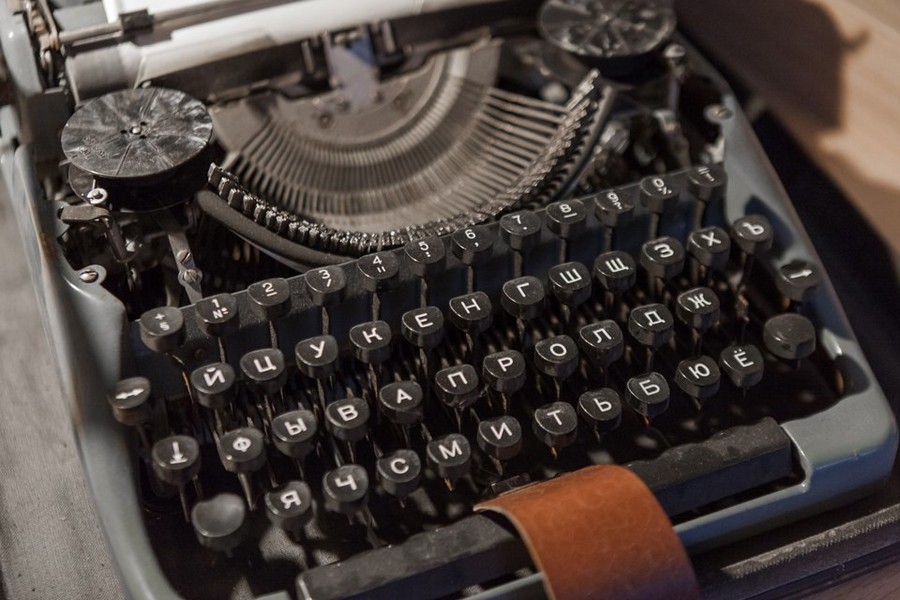 The centerpiece of the balcony is a handmade table made from an old sewing machine framework. 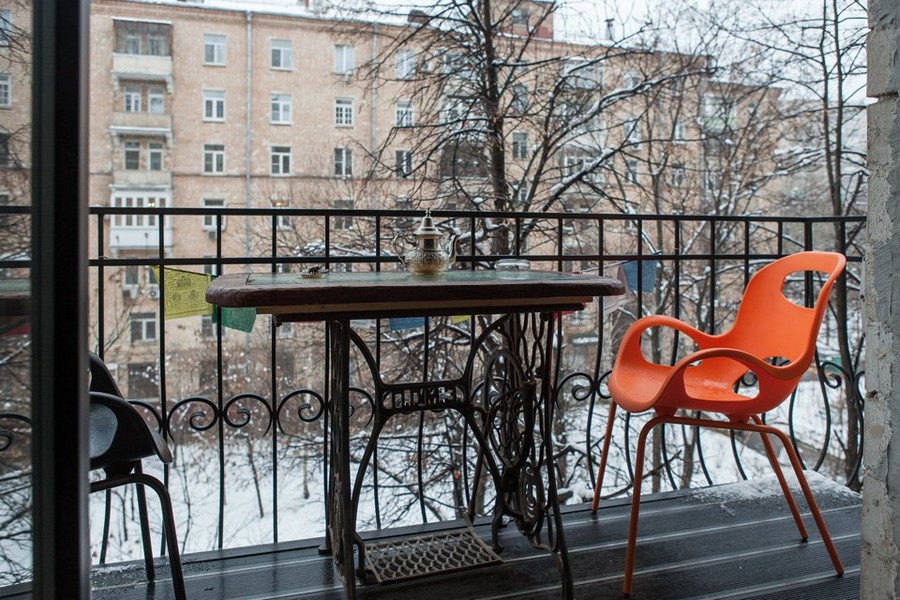 In the bedroom the role of the bed is played by a mattress put on a custom-made podium. 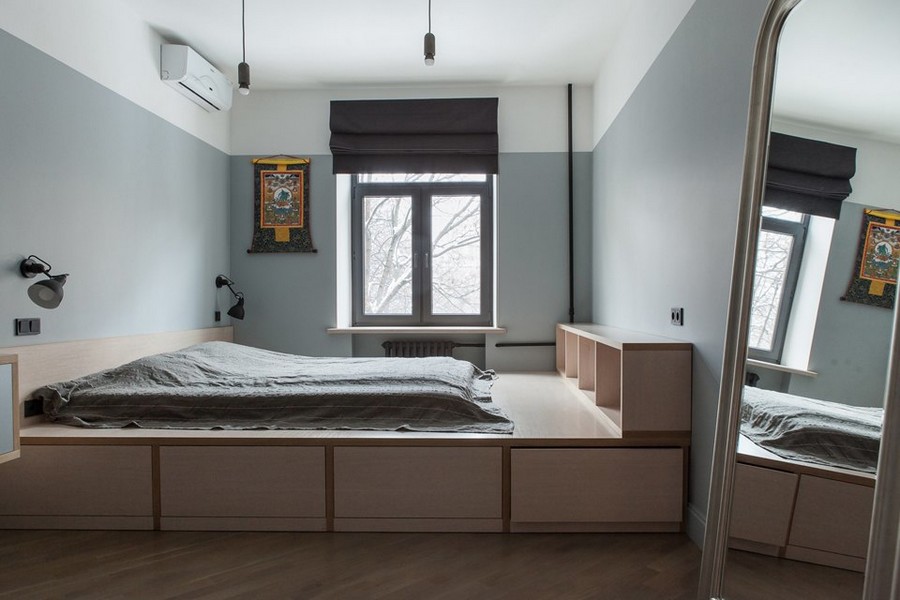 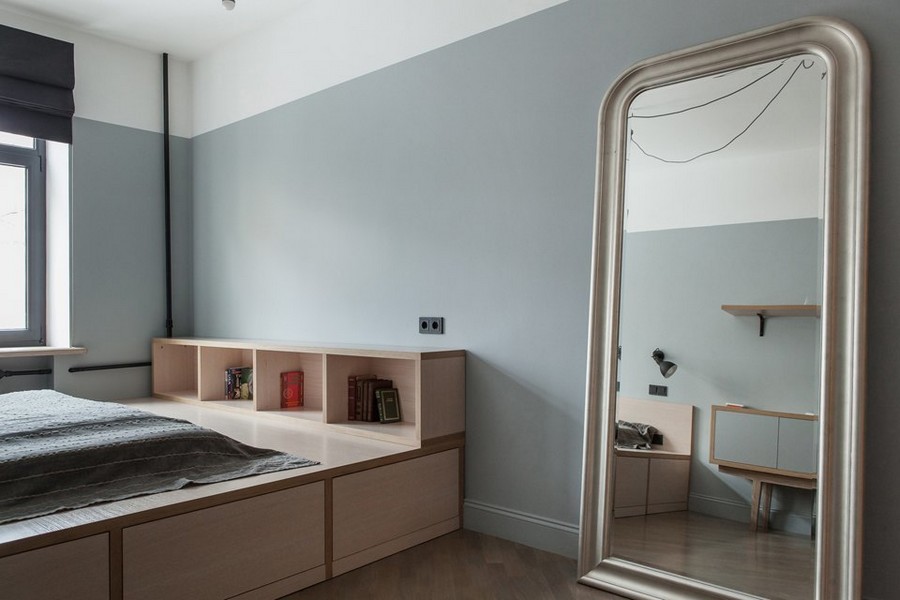 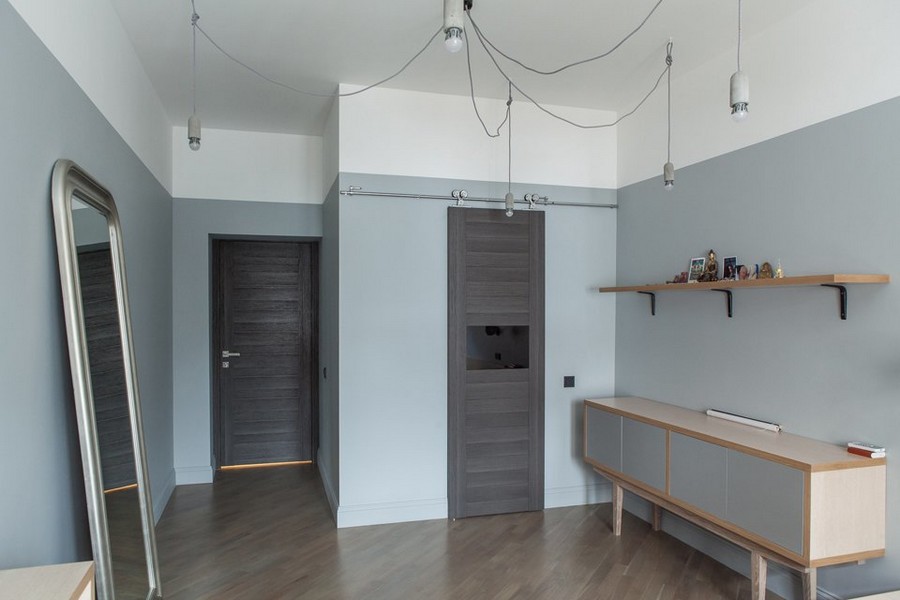 The designer paid special attention to the storage system organization. To avoid the emergence of free-standing cabinets in the kitchen, the refrigerator was put into a wall niche, which had appeared in the place of the ex-doorway. And the space above it was filled with extra top cabinets. In the bedroom a walk-in closet was arranged and four giant drawers built into the podium. To crown it all, a built-in closet was made between the load-bearing columns in the corridor and painted just like the walls. 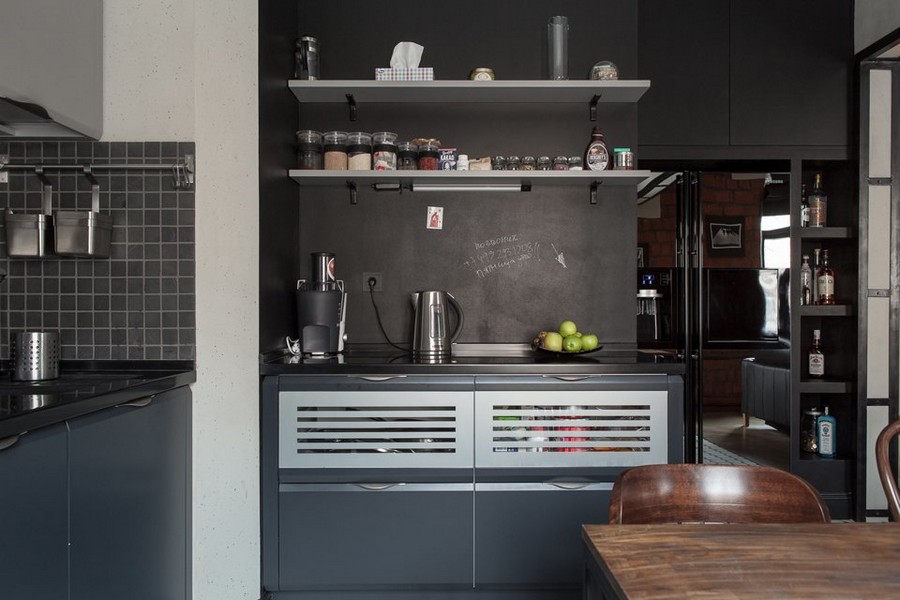 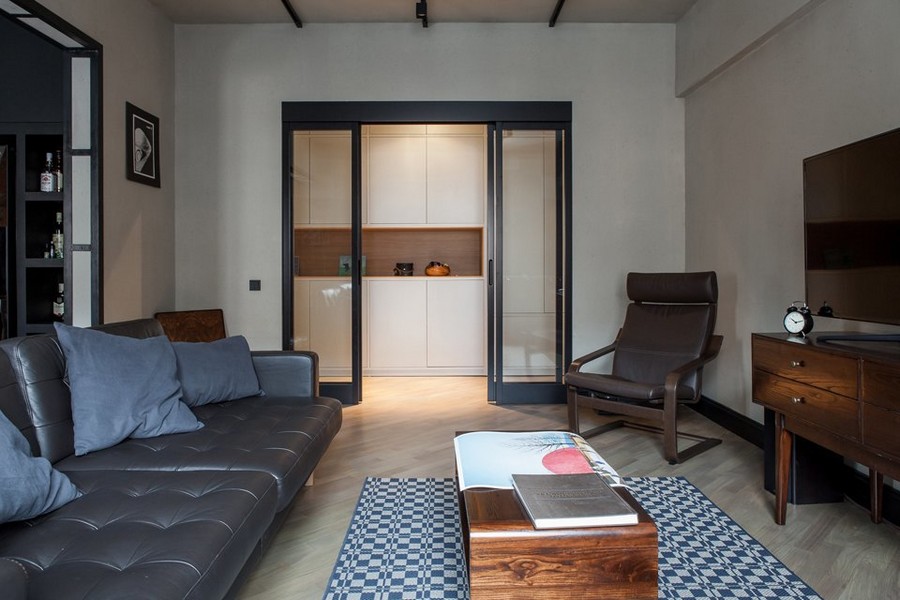 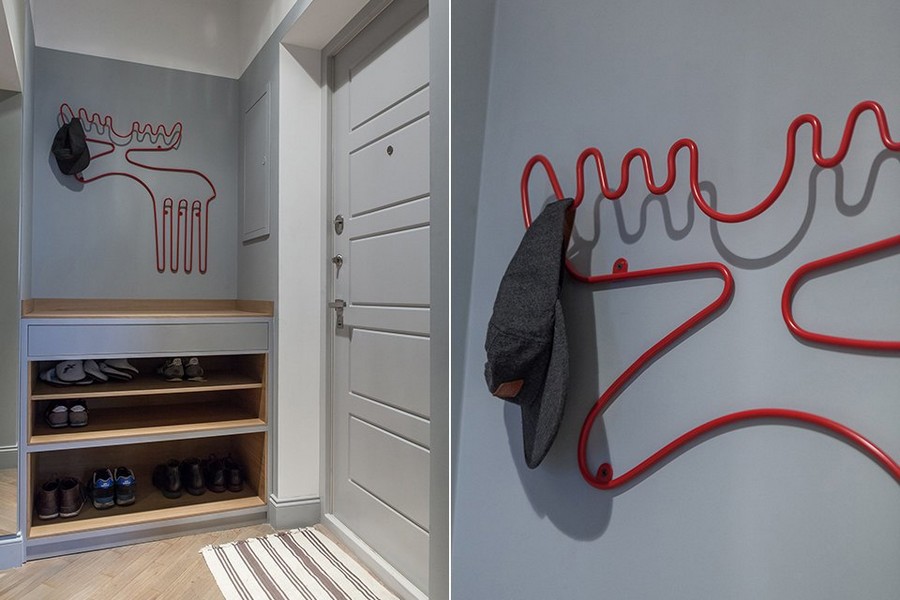 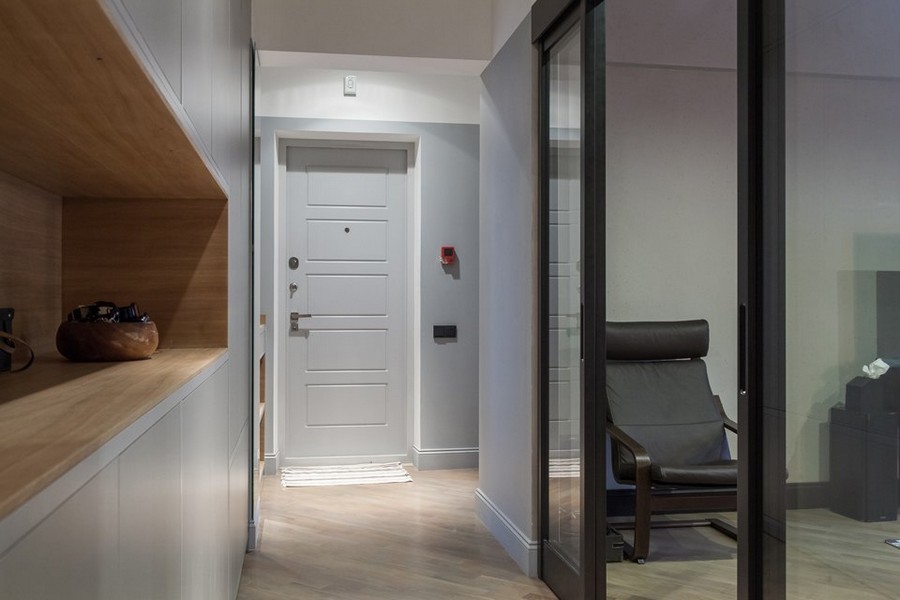 As for the bathroom, it is also very austere and masculine: white square tiles, exposed concrete wall parts and a few black accents, though a little bit refreshed by retro design, make this room quite brutal and mannish. 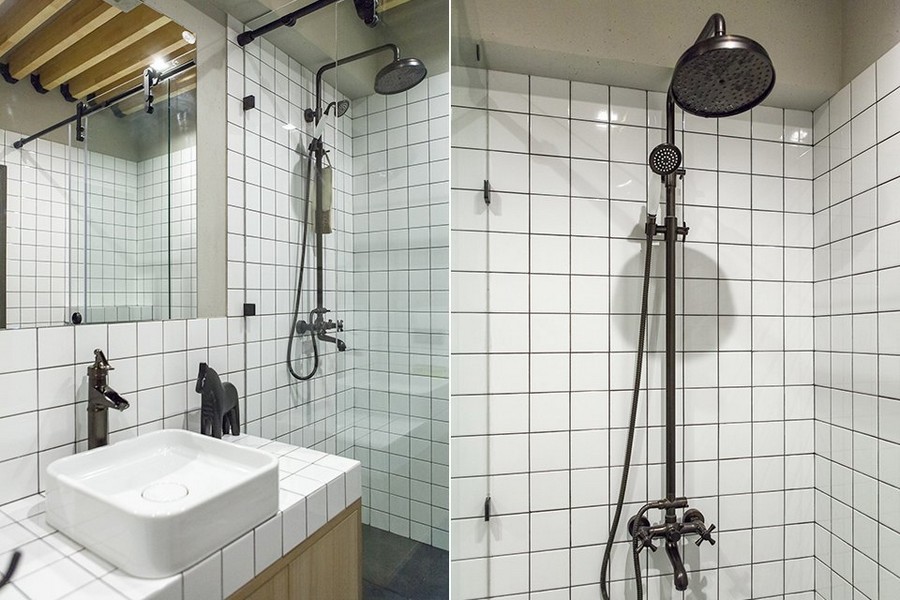