Sunny Studio Apartment with Panoramic Windows in the Heart of Sochi

Have you ever seen an apartment for rent that was designed with soul and so tastefully that you wished this were your home forever? This studio apartment is a good example of the fact that such places do exist! 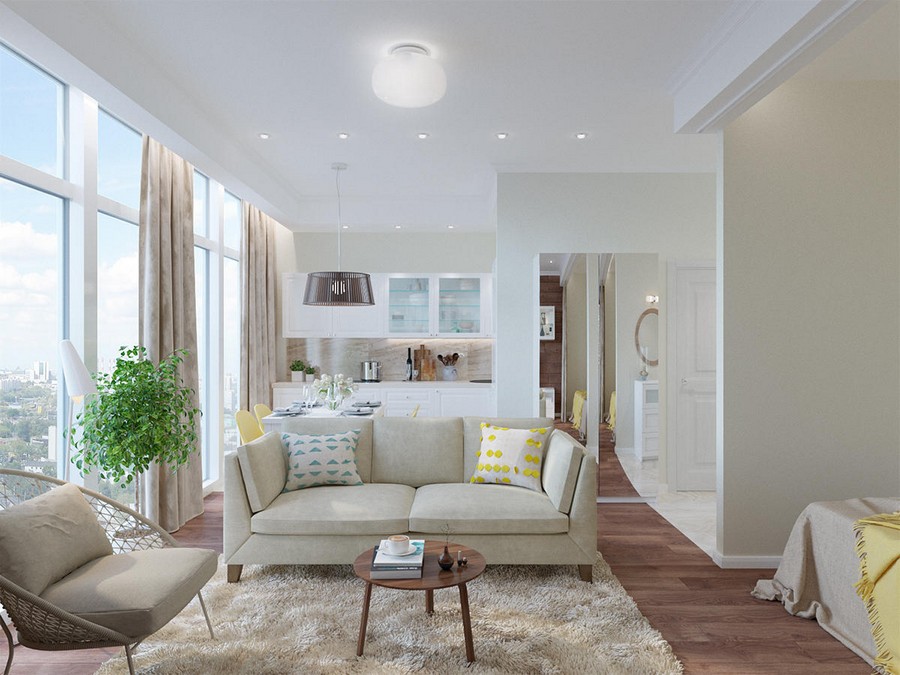 The client is a businessman who purchased a few newly-built apartments in the heart of the sunny and rapidly developing ex-city of the Olympic Games – Sochi. One of them was this small studio with the total area of 37 square meters. And though the master was going to rent the place out and as soon as possible, he was willing to design the interior competently and tastefully, and hence turned to a qualified designer. The latter helped him understand the potential category of renters and analyze their personality types, wants, needs and stylistic preferences. As a matter of priority the studio had to be absolutely functional and full-fledged despite its pretty tight total area. At the same time it had to preserve its original volume, and the interior had to be based on the three pillars named by the client – a light color scheme, natural materials and naturalistic textures. 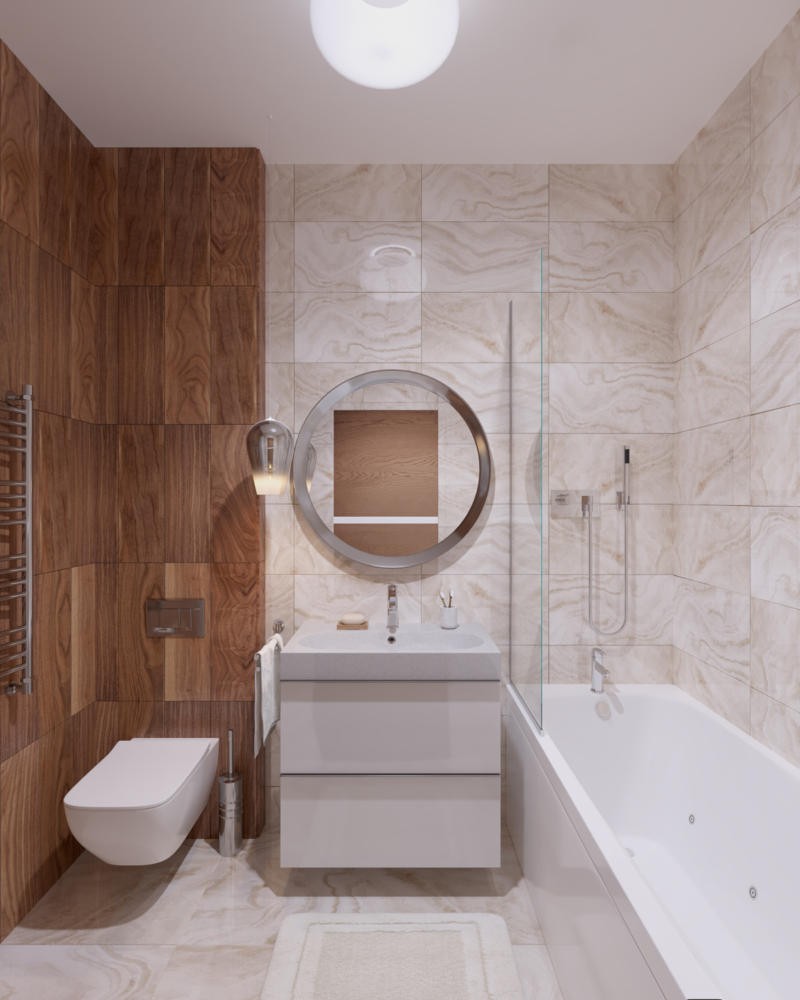 The special feature of this flat is its perfectly square shape and huge panoramic windows with a splendid city view. The layout was free-pattern: the only interior walls separated the bathroom and the rest of the space was absolutely open, but with the kitchen technical systems already arranged. The designer offered a few variants of layout plans, and the client had his heart set upon the option with a full-fledged bedroom zone separated from the rest of the space with a partition. This very partition separated the entrance hall at the same time. Visually the division between the residential and entry areas was emphasized by different flooring materials. Two potentially wet and muddy zones – kitchen and entry – were finished with ceramic granite tiles imitating natural stone texture. In the bathroom this texture was additionally enhanced by wall tiles with faux wood grain. The kitchen backsplash was made from ceramic granite with similar texture, but of more saturated color. 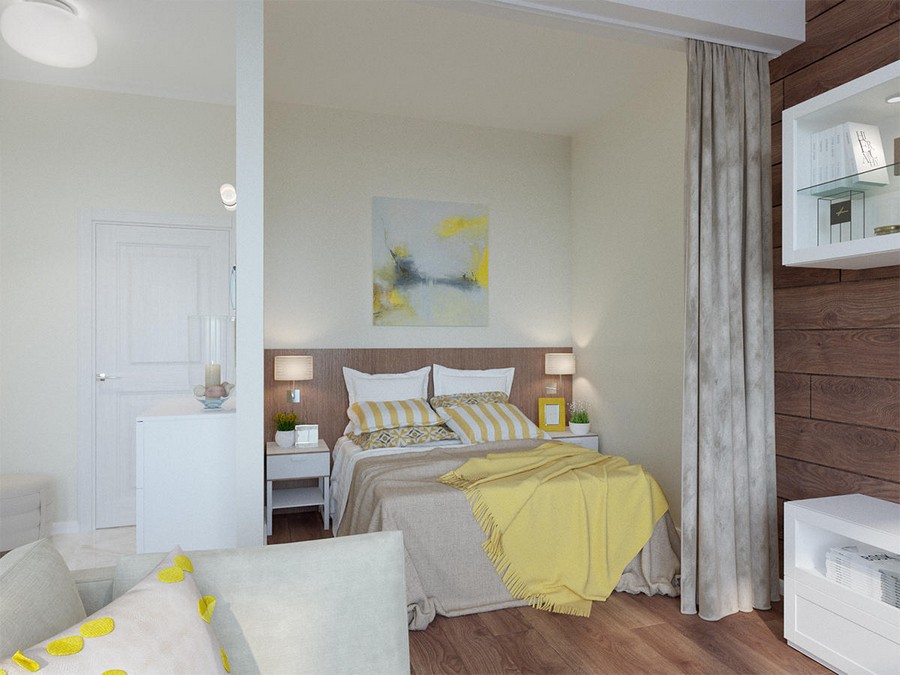 These materials were applied locally, and the leading role was given to wood of very sweet warm shade with beautiful grain. It both brings ultimate coziness to the studio and creates a nice contrast to beige tiles. It can be found on the floor of the lounge and sleeping zones, on the wall behind the TV set and in the headboard. The rest of the walls are painted warm sand beige. As for the third, accent color, it is yellow, but very pale and unostentatious, used in small amounts in the elements of home textile and décor. If the renters would like to change color accents to their taste, they can easily make it by replacing the accessories. 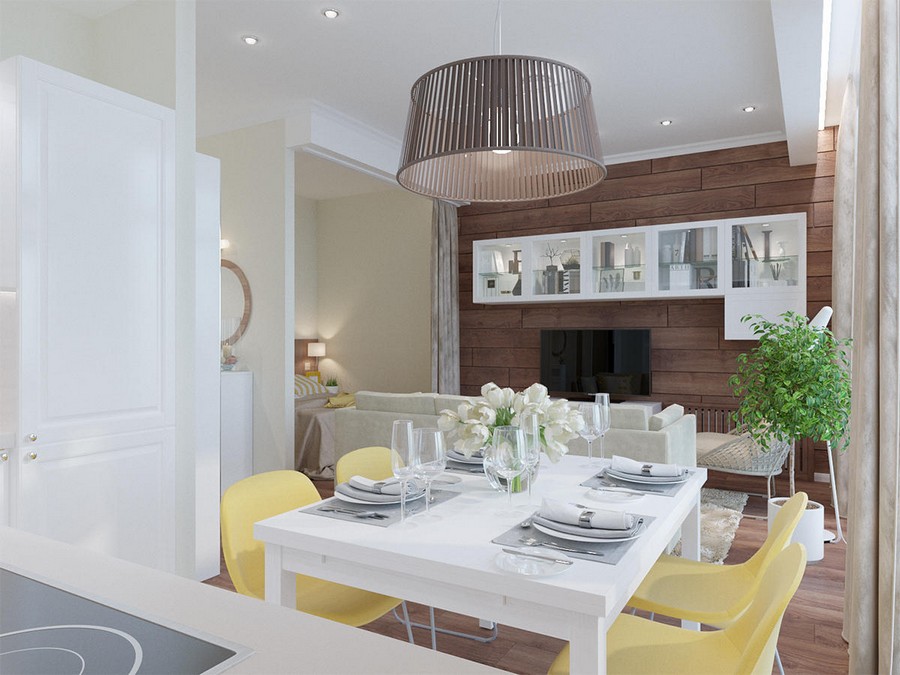 The presence of just a few types of materials is explained by the desire to make the dwelling as airy and fresh as possible. And the fact that almost every piece of furniture here is white is one more trick used for the same purpose. The kitchen set is pure white, quite big and with all necessary appliances and utensils. It’s partially arranged in a wall recess, which adds the sense of openness and airiness to the apartment in general. The four-person table can be converted into a big dining table when needed. 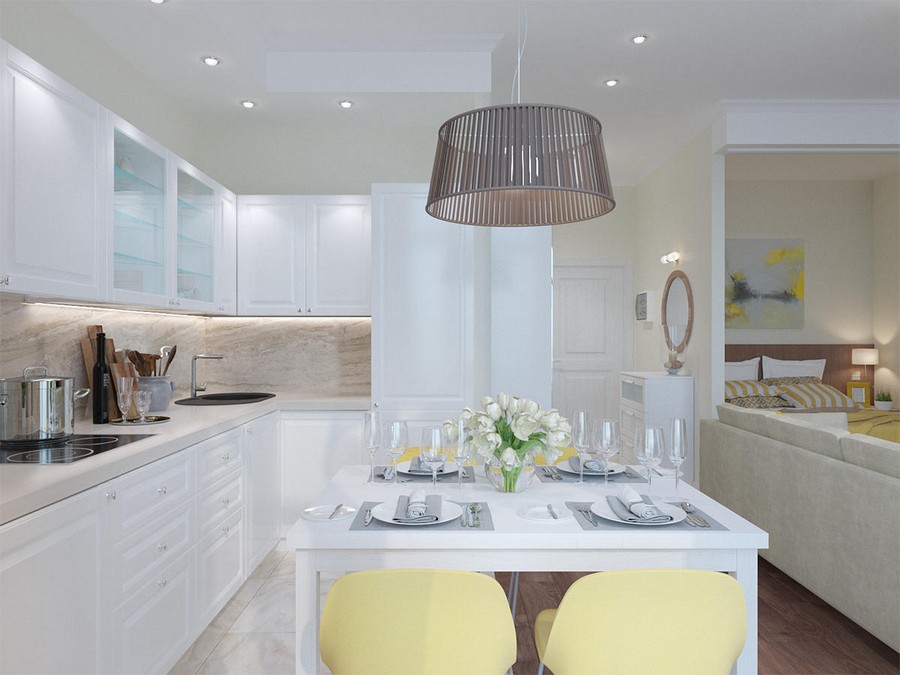 The rest of the studio space is occupied by the lounge area. It’s visually separated from the kitchen zone by a sofa. Complemented with a comfy arm-chair it’s facing the wall with a TV set. The open-plan layout of the space helps to make most of the space and enjoy the view opening from the huge windows. 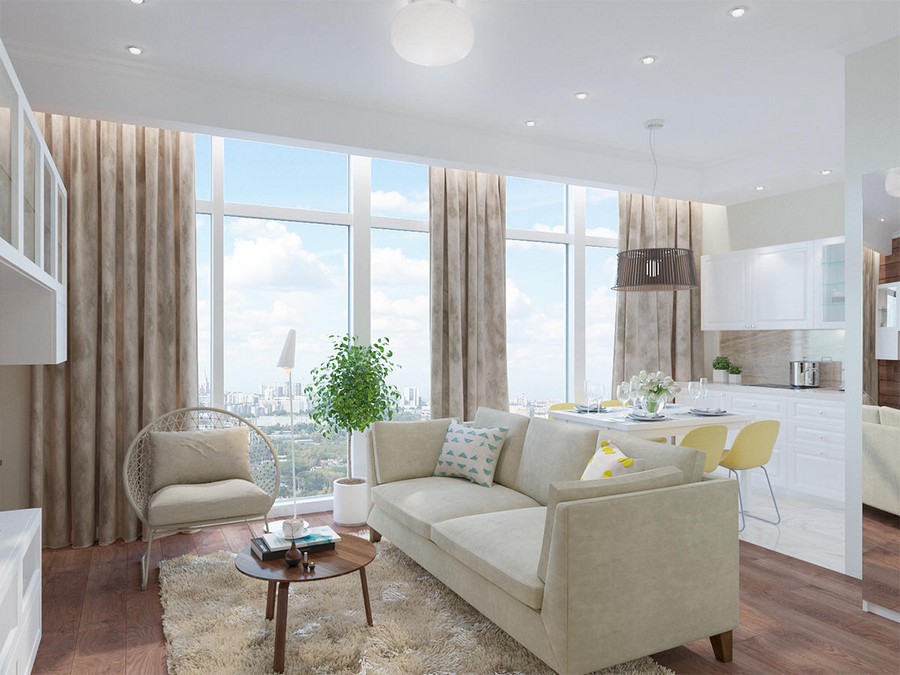 The lighting is zoned and has a few modes. Along the panoramic windows a sheetrock construction conceals curtain rods and built-in LED lights. The kitchen is lit by a few spot lights and a big suspended lamp above the dining table. In the living room spot lights are coupled with a ceiling lamp, and two sconces illuminate the bedroom.

Now the project is being implemented and very soon it will accommodate its first dwellers. In general this studio is a great example of ergonomics and design that doesn’t make an apartment for rent standard and impersonal. It’s cozy, light and very functional despite its small area.