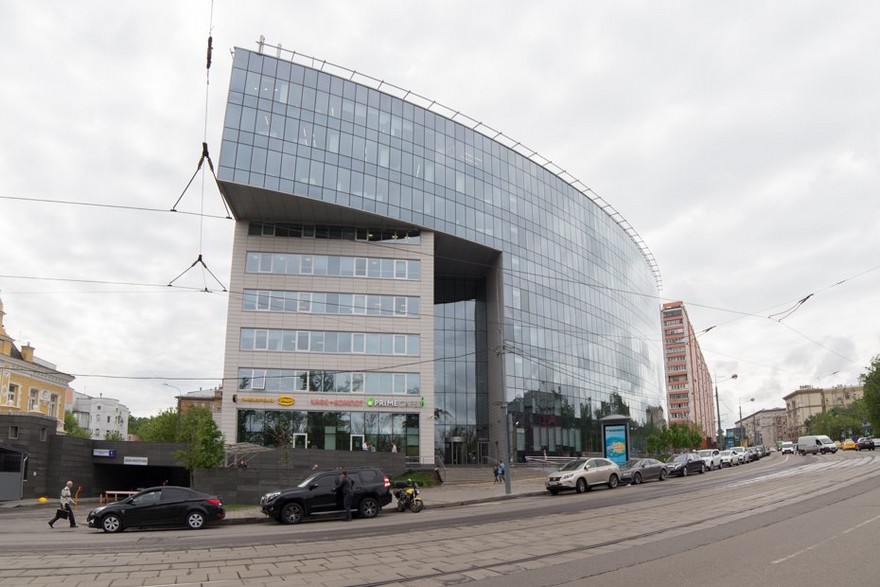 Mattel is the world’s biggest transnational corporation creating Barbie and Monster High dolls, Hot Wheels and Matchbox cars, and baby toys by Fisher Price and owning loads of other brands. Its Moscow headquarters has recently moved to a new office with the total area of 800 square meters. It gives work places for 66 employees and we’d like to take you on a virtual tour around this magical kingdom of toys… 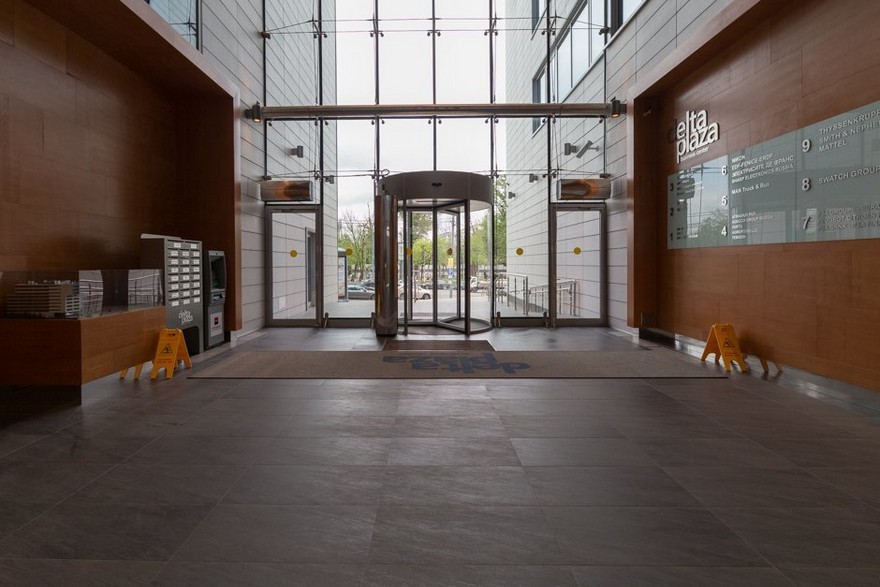 The CEO of Mattel representative office in Russia says that he wanted to get a fully completed office with a well-thought-out concept – just like a toy that you take in your hands and enjoy it. To his mind, the team of architects managed to do that. The only requirement set to them was to create a light and spacious office, with airy atmosphere and no dark shades. He deliberately wouldn’t interfere with the process of designing. Though he admits that a few times he really wanted to reject some of the ideas. For example, when he saw a project of a meeting room, the chairs around the table seemed “garden-style” to him, but he resisted the temptation to ban them and trusted the professionals. In the end he doesn’t regret this decision. 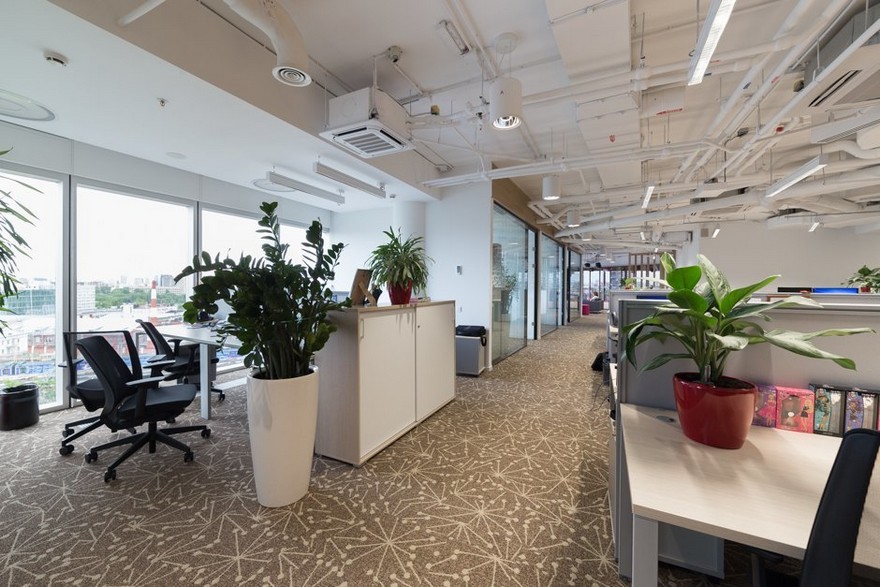 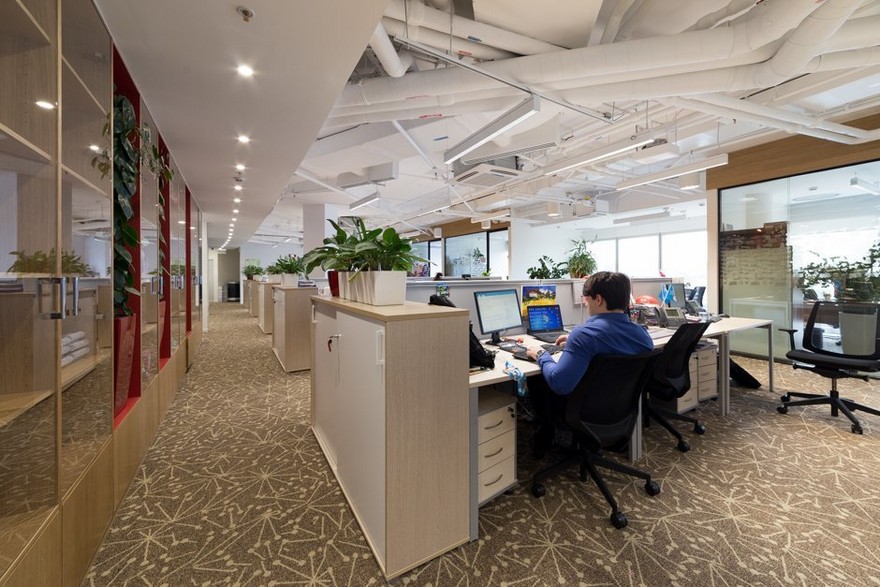 At the same time the CEO feels that the company could save on some interior elements. For example, the carpeting was brought from Spain, since, according to the architect, the desired pattern couldn’t be found in Russia.

The interior is designed in two dominating colors – red and white – matching the company’s logo. The accents are bright pink: Barbie-style arm-chairs in the reception area and eye-catchy ottomans in the lounge zone. 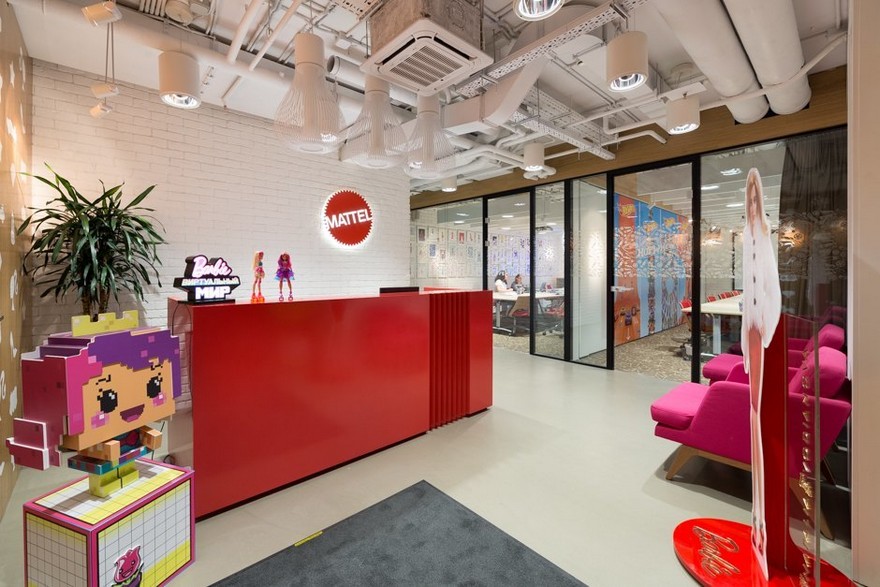 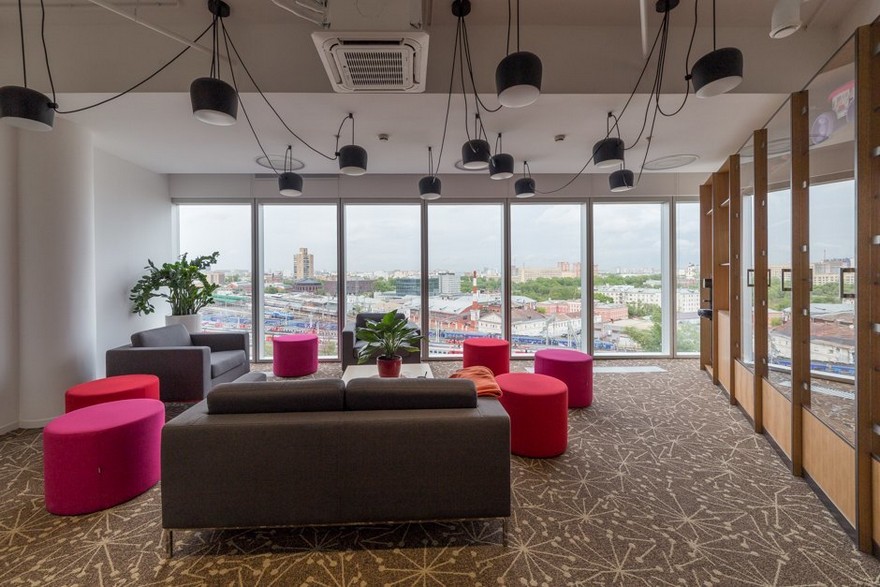 Meeting rooms are dubbed and designed in honor of iconic Mattel’s toys: in the Thomas zone, for instance, you will find a floor-to-ceiling wall mural with a print of this famous train, and in the Barbie room there’s a wall-to-wall gallery of pictures featuring all the models of this gorgeous doll, from the oldest to the latest one. 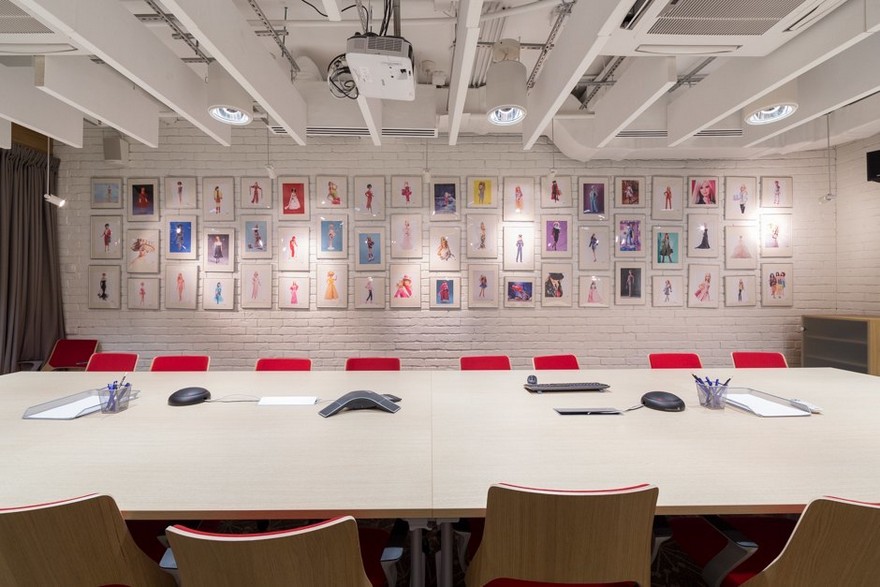 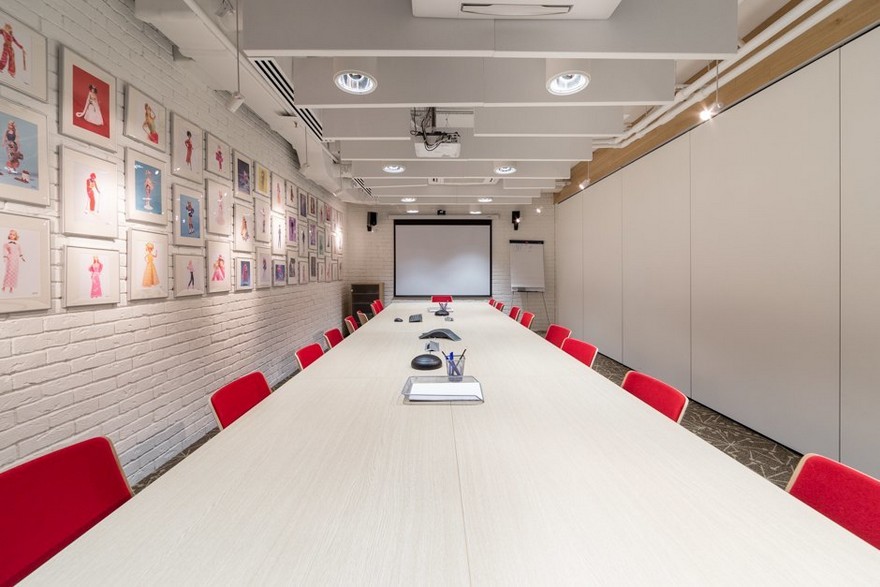 A matte film for the glass and a wall created from wooden planks to accentuate the lounge zone were custom-made. 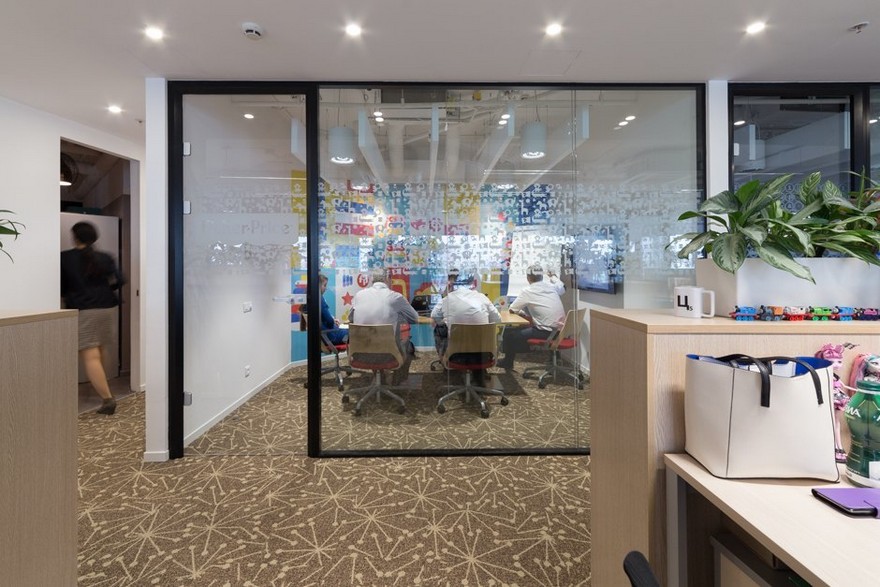 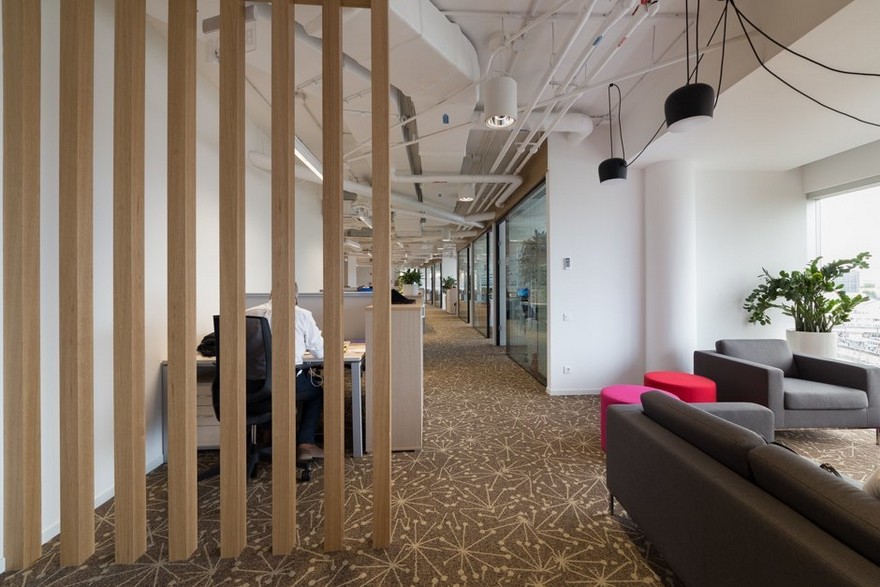 Most of the office area is designed as an open space. In general the staff of the company amounts to about 100 people, but only 66 of them work from the office. Mattel made sure that newcomers would have full-fledged extra work places as well. Also there are co-working spaces envisaged for part-time employees: they will have common work desks, but each employee will have a personal locker. 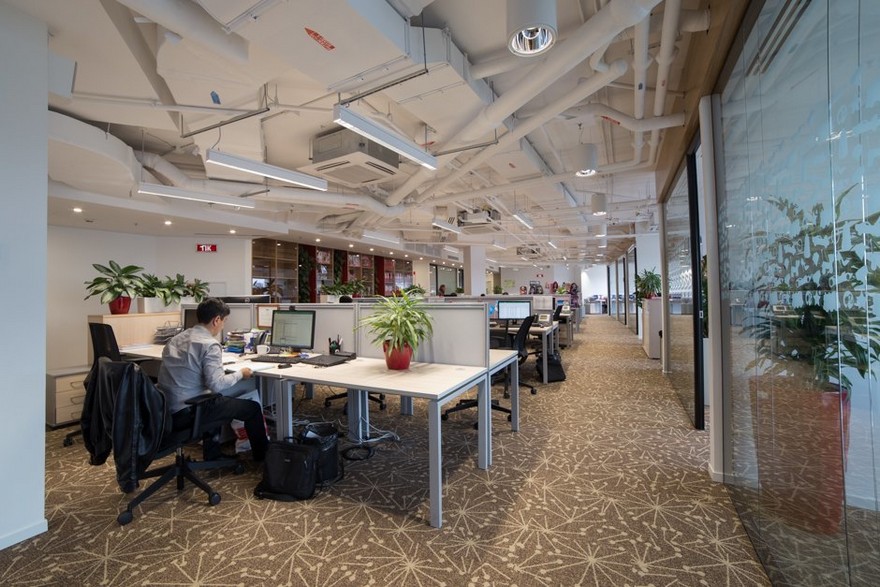 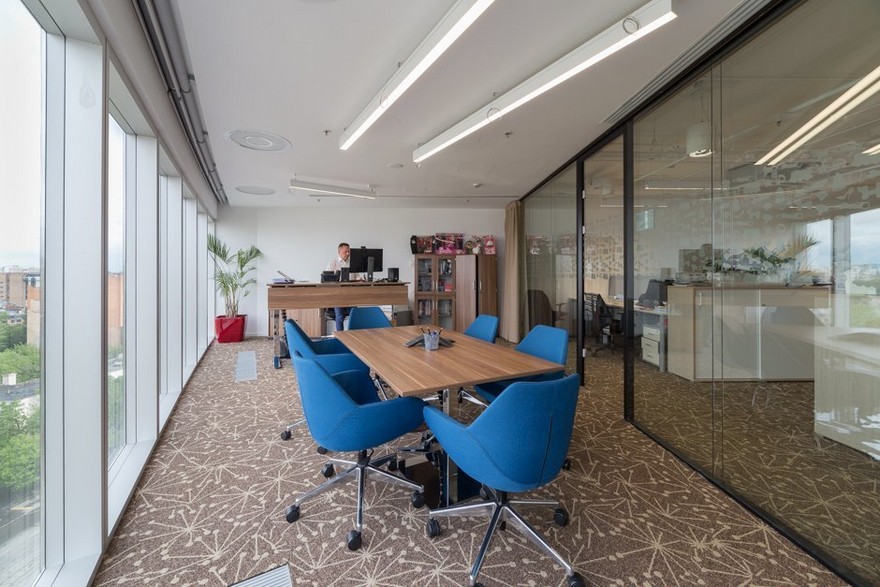 Employees of Mattel’s Moscow office regularly communicate with their colleagues from Spain, Germany and England: according to the corporate tradition, offices from all the countries frequently hold international video-conferences. Especially for these events the common wall of the two meeting rooms was made sliding, which turns them into a spacious conference hall. 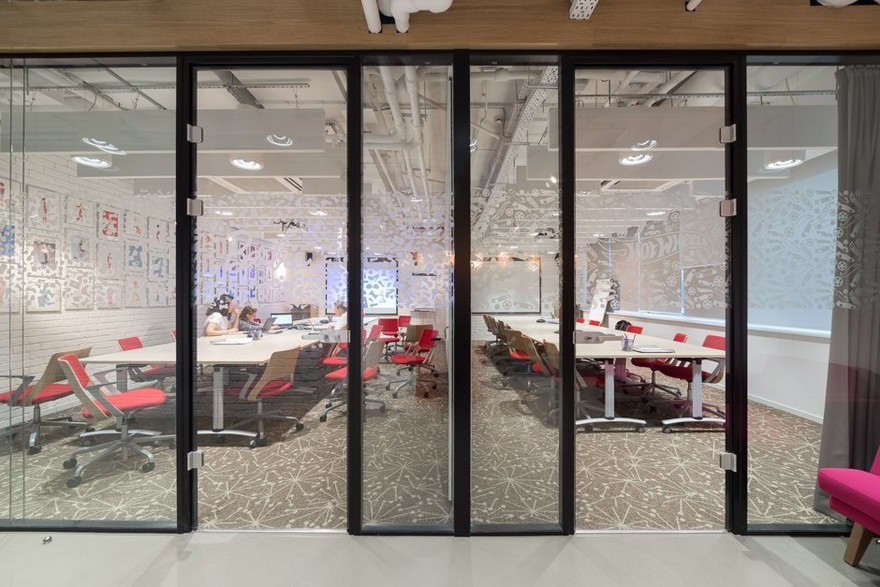 The dining area is designed in the style of a lounge café and features a bar table, big designer lamps, a chalkboard wall. 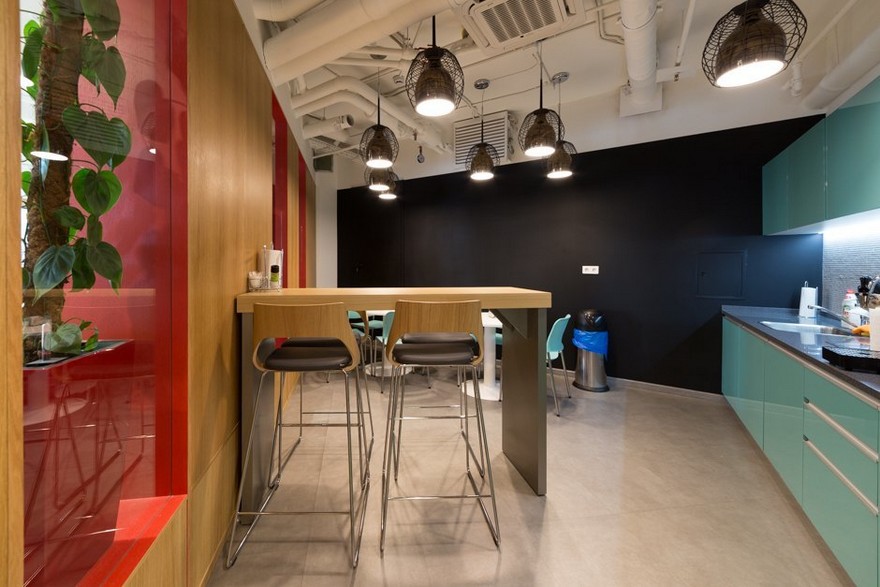 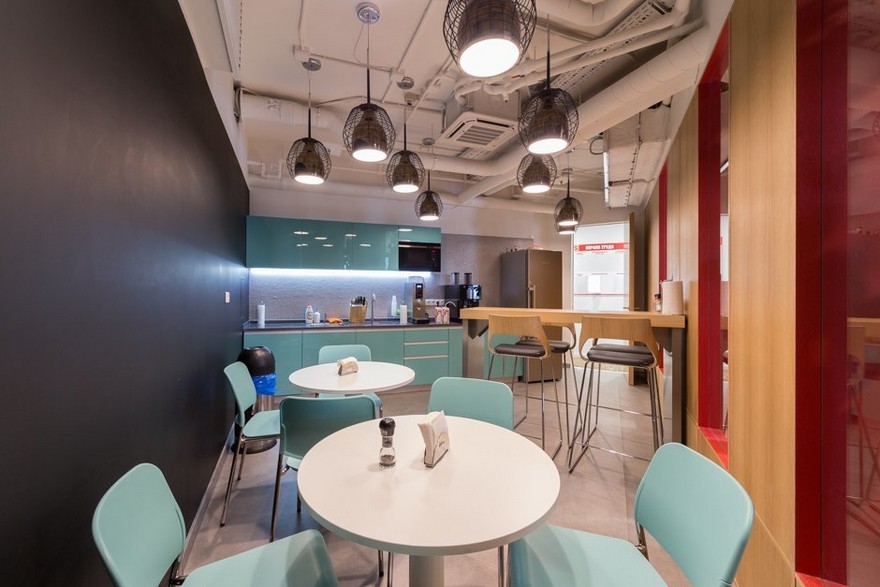 To embrace the company’s spirit and have better understanding of the products, many employees keep toys on their desks. According to the company’s policy, these samples can’t be taken away and are intended for office use only. But once a year the company gives their employees an opportunity to choose any dolls and cars within the determined budget to have a chance to play at home. 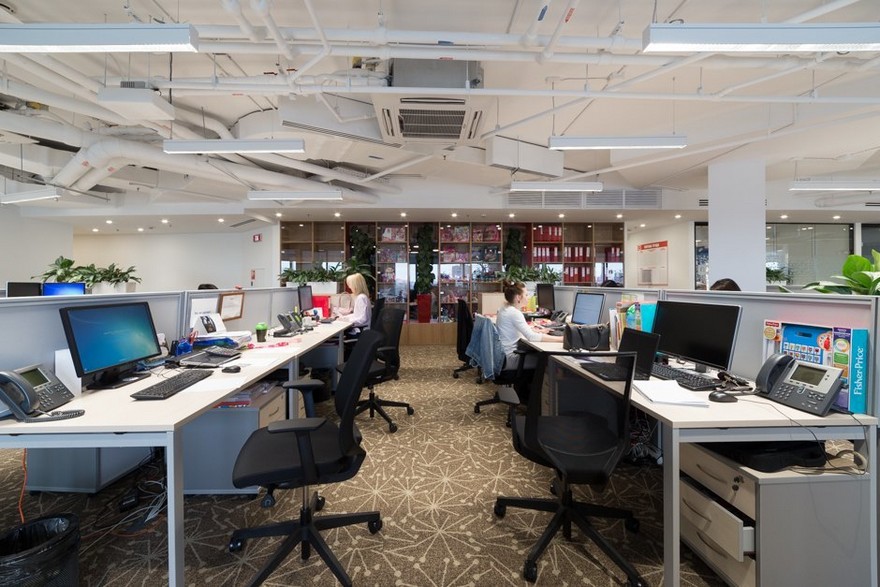 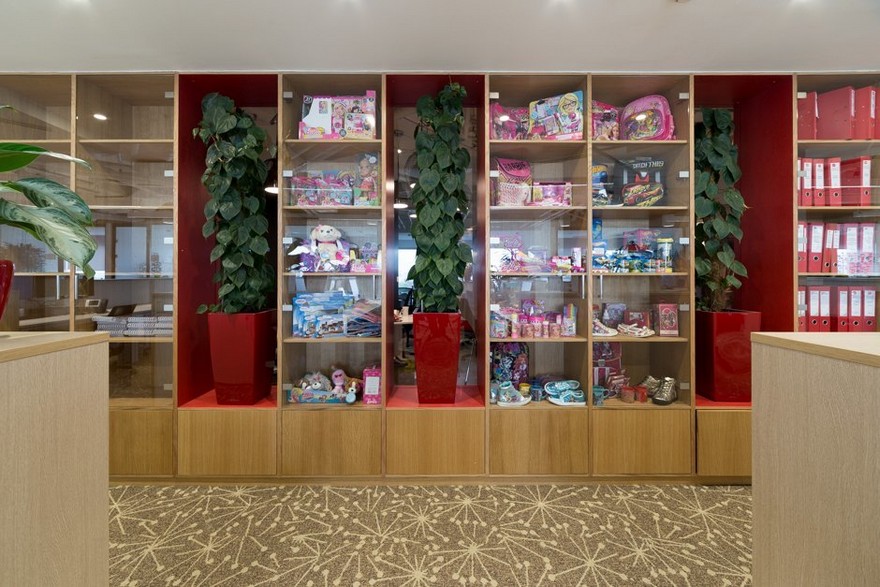 According to the CEO, the location of the new office – by the railway – nurtures the corporate spirit and goes in line with their vision of the company’s mission. He confesses that trains remind him of the Nike’s old motto, which said that life is a journey. Mattel is also moving forward and transforming permanently, inventing new toys and new approaches. Now it’s time for virtual toys; they’re becoming more popular than traditional ones. And all this perfectly blends with the office interior – a giant playroom overlooking the railway station and departing trains… 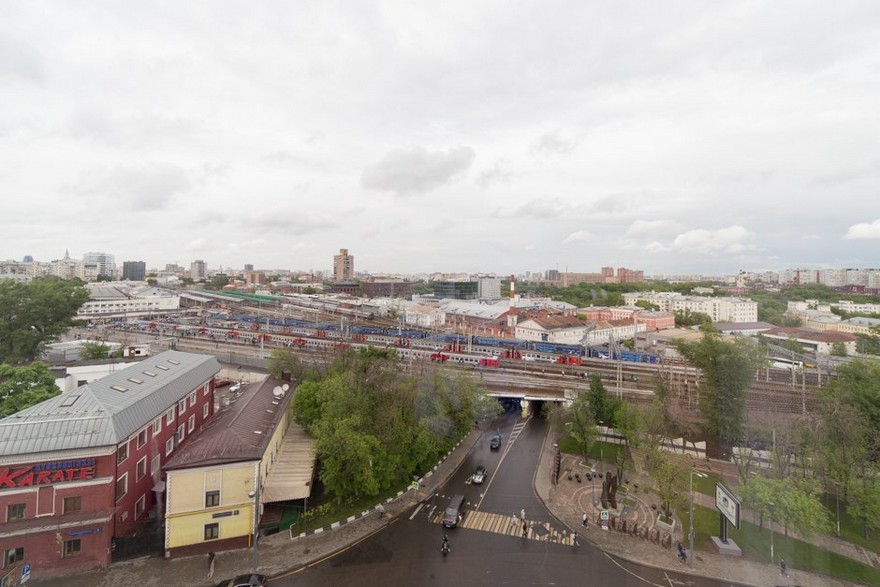