Helen and Victor have long lived abroad, and on coming back to Moscow knew exactly what kind of interior they want to see in their future home. What they mostly desired was minimalism, white walls and plenty of light and air. It wasn’t an easy task to obtain this effect on 57 square meters because they also wanted three full-fledged isolated rooms: living room and two bedrooms – for the parents and their kid. For this sake the space had to be totally re-planned: the balcony was added to the living room to get panoramic windows, and the toddler room was shifted to the ex-kitchen. 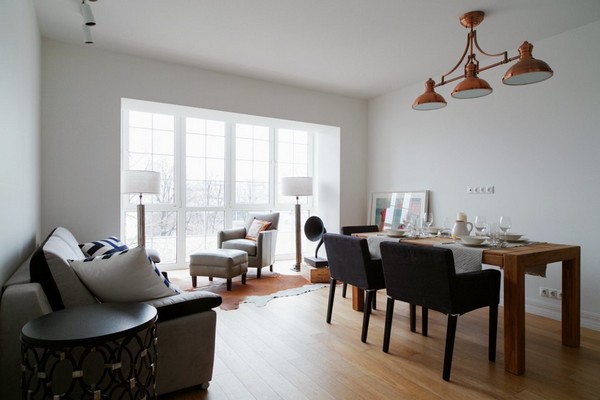 A huge window became a starting point, which set the mood for the entire interior. The owners willfully refused to use the blinds for the sake of more sunlight, which people lack so much in moderate climate. 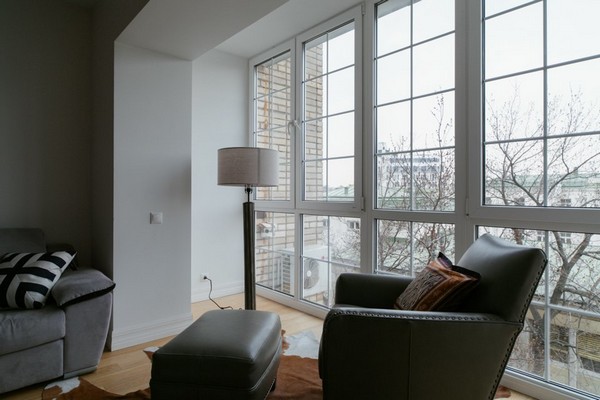 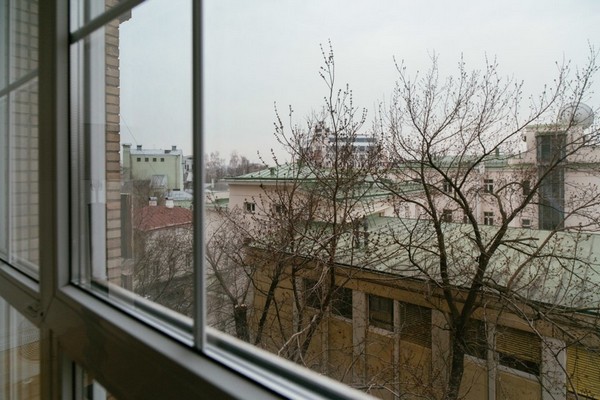 The flooring is made from solid parquet boards. The kitchen zone is quite compact and neutral. The set was custom-designed and made by designers’ drawings. The built-in appliances in the kitchen are made by Gorenje. 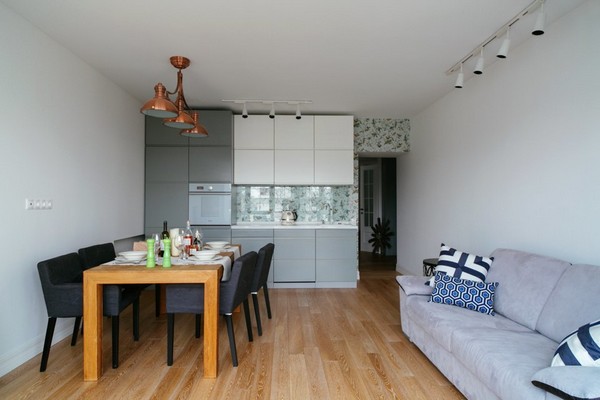 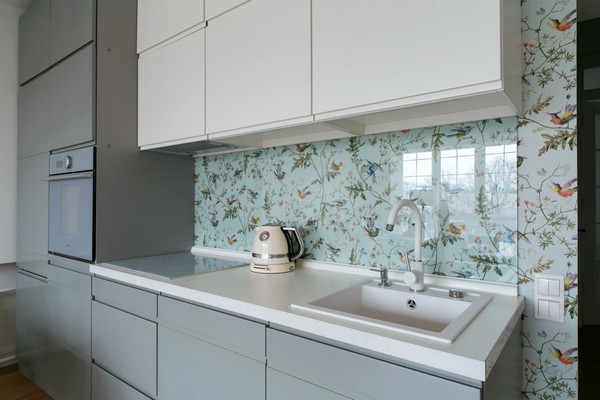 Most of the accessories, lamps and an arm-chair arrived from My America showroom. 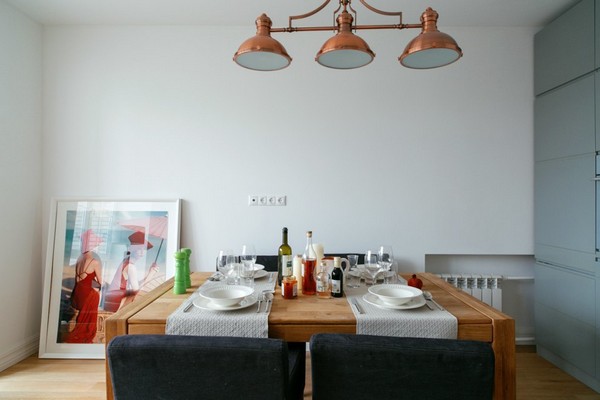 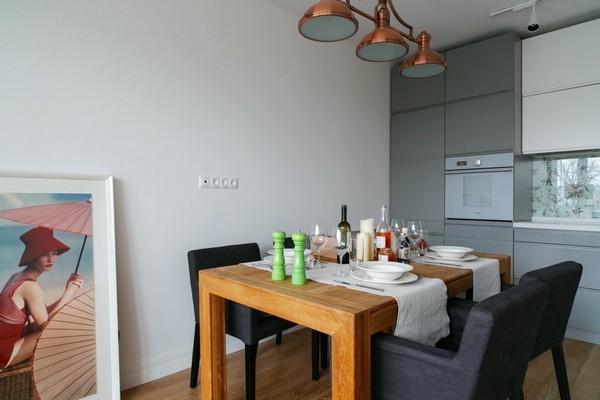 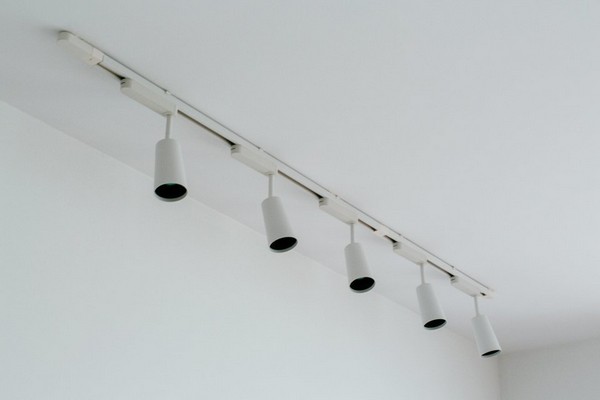 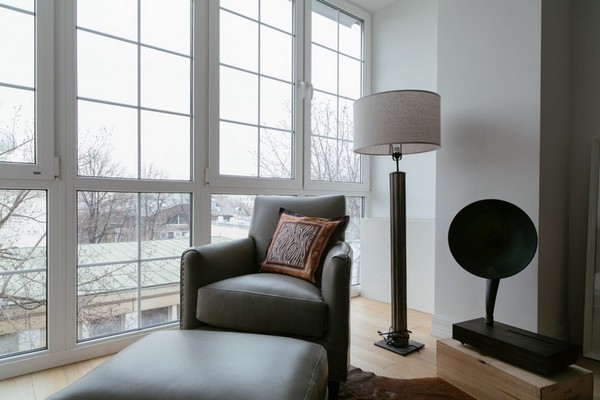 Previously there was one big bathroom, but the hosts preferred to split it into two – private and guest ones.  Sanitary porcelain is made by Vitra. 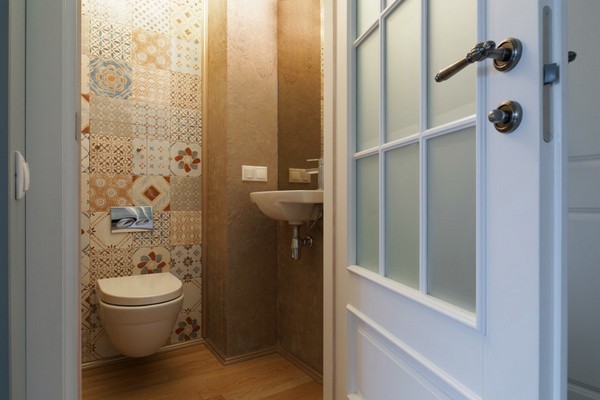 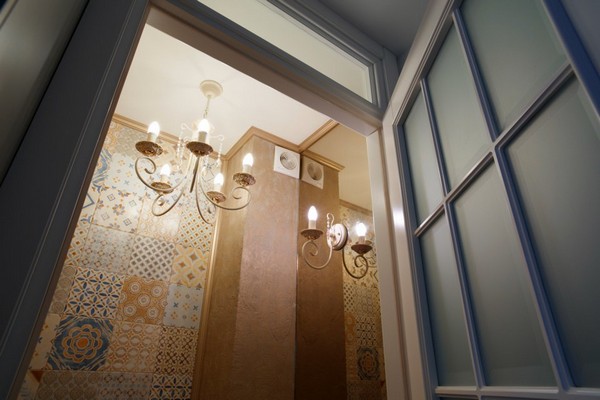 Storage system was arranged behind the doors in the rooms and in built-in wardrobes in the hallway. 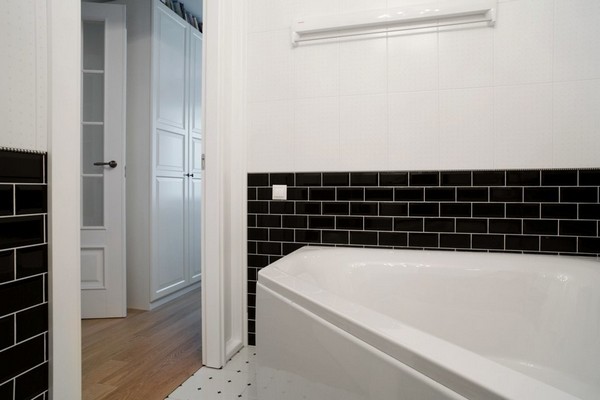 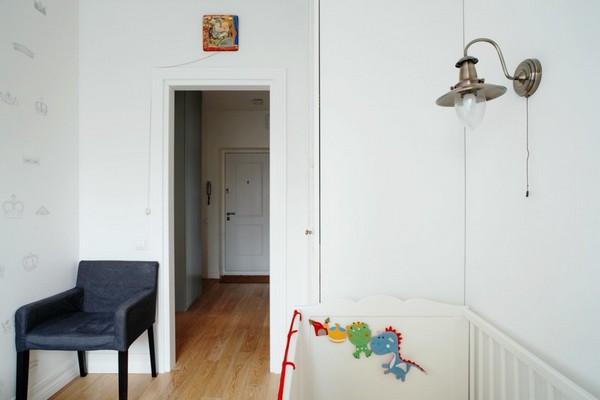 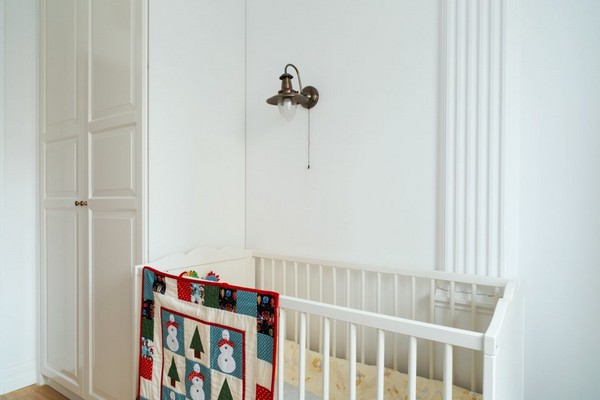 To soften the sterile look of white walls, the owners have decorated a few walls with beautiful wallpaper by Cole & Son. 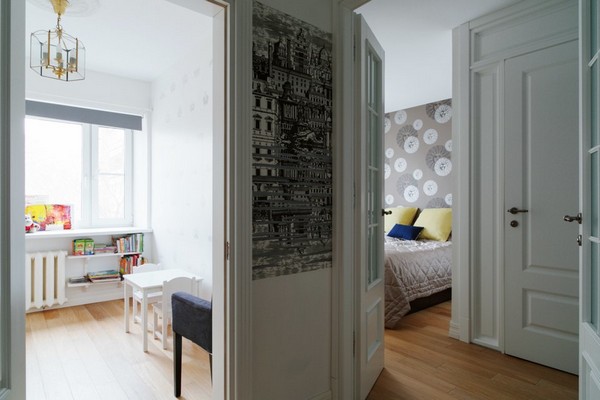 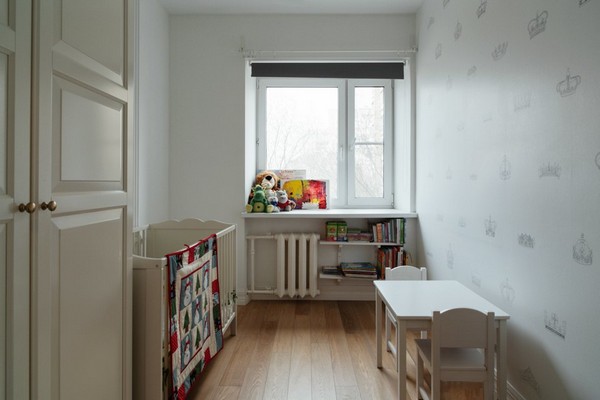 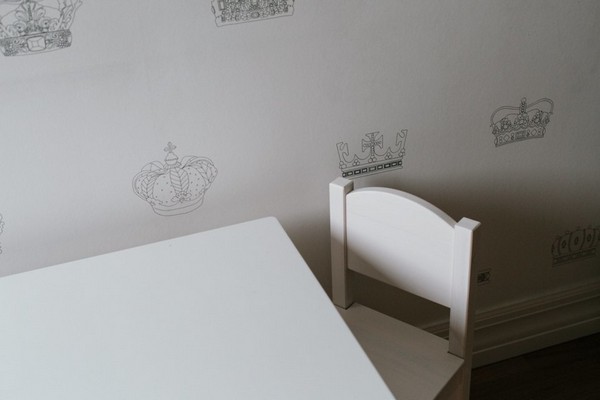 According to the designers, the most expensive project in this apartment was custom-made doors. 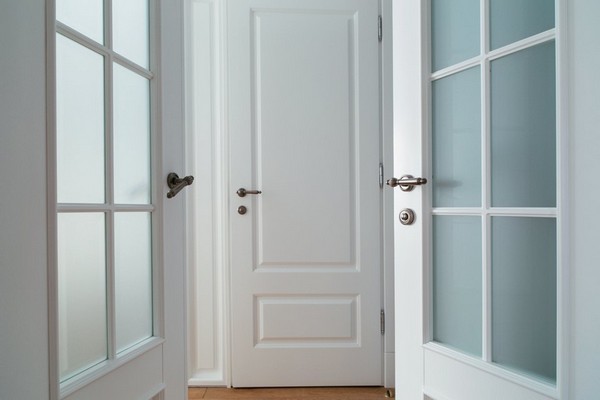 The bedroom was equipped with a big wall-to-wall closet. Additional storage spots were arranged under the windowsill and concealed behind the blinds. Accessories and décor in the room are made by My America and Zara Home. 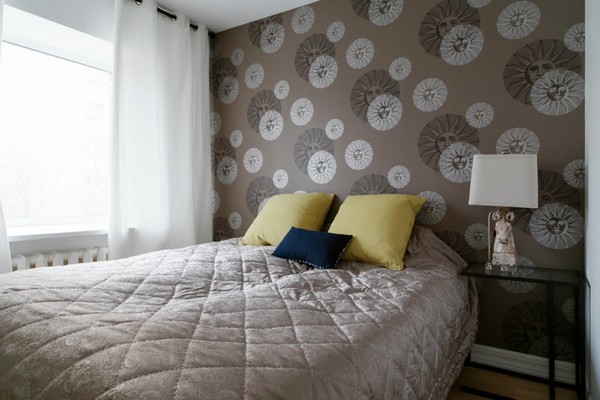 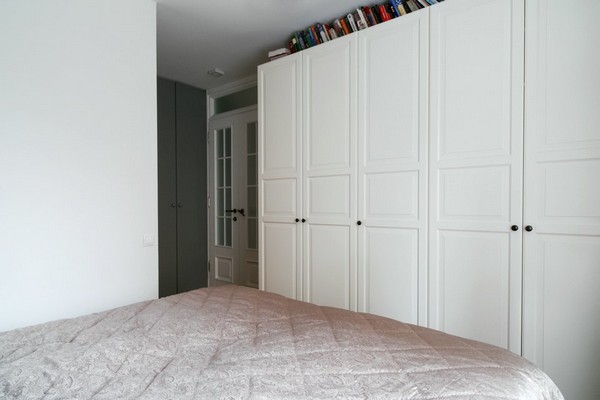 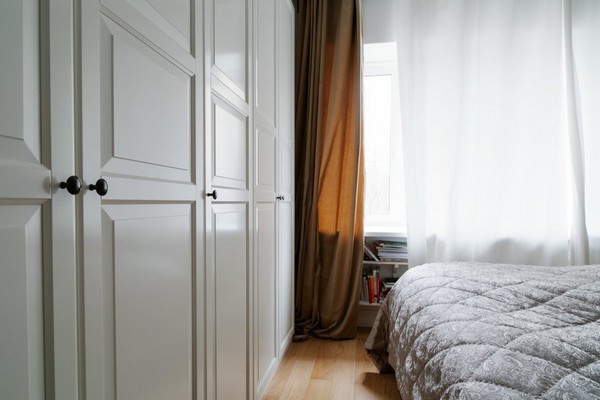 The boudoir feeling in the bathroom was created thanks to a huge bath, a chandelier and a gorgeous mirror. 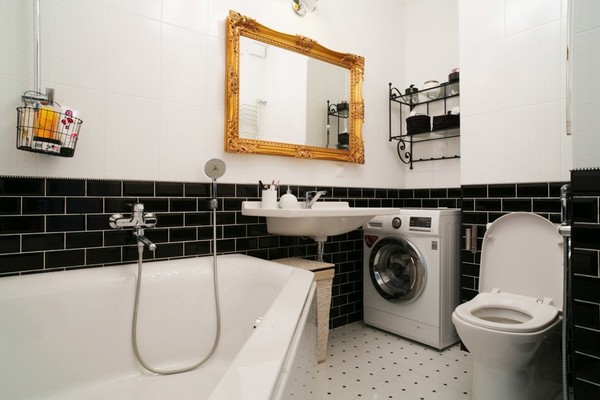 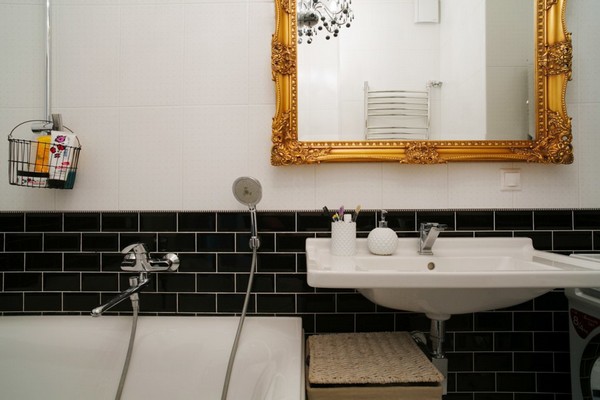